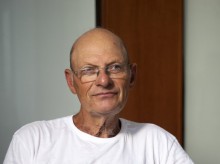 JERUSALEM (AP) — Unlike many of his fellow Israeli generals, Amir Haskel wasn’t looking to politics in retirement.

After 32 years in the Israeli Air Force, he became a Holocaust researcher and was satisfied with publishing books, leading student delegations to former concentration camps in Poland and spending time with his four children and six grandchildren.

But as Israel’s prime minister became further enmeshed in corruption allegations, Haskel felt he could no longer stay silent. So, nearly four years ago, he picked up a sign and took to the streets in an individual act of protest.

Now, after his highly-publicized weekend arrest during a peaceful demonstration, he has emerged as the leader of a growing grassroots movement demanding that Benjamin Netanyahu step down.

“I wasn’t looking for leadership. I went out to the junction to say what pained me,” the 66-year-old Haskel told The Associated Press on Monday. “I will continue with this struggle over values and principles because there is no way that a person who faces an indictment on bribery, fraud and breach of trust will be prime minister. It’s just unfathomable. No proper country can allow that.”

Netanyahu is currently on trial for a series of cases in which he allegedly received lavish gifts from billionaire friends and traded regulatory favors with media moguls for more favorable coverage of himself and his family. He denies wrongdoing and has doggedly refused to step down, lashing out at the media, the judiciary and law enforcement, which he says are engaged in a witch-hunt against him.

The scandals featured prominently in three hard-fought Israeli election campaigns over the course of a year. But amid a continued stalemate, and a coronavirus crisis, Benny Gantz and Gabi Ashkenazi, the two retired military chiefs who vowed to replace Netanyahu, decided to join the longtime leader instead in a unity government. Now, the main source of opposition to Netanyahu is in the streets.

Haskel and his small group of supporters have aligned with other groups to stage weekly protests in front of Netanyahu’s home, wearing protective face masks and chanting slogans while hoisting Israeli and black flags and holding signs reading “Crime Minister.”

On Friday, police detained Haskel and others for what was deemed an “illegal” demonstration because a road was briefly blocked. Netanyahu’s hand-picked minister overseeing the police quickly vowed to show “zero tolerance” for public disturbances.

The police offered to free Haskel if he agreed to release terms that prohibited him from returning to the scene of the protests. Haskel refused, spending the weekend in jail before a judge ordered him and two others freed while criticizing the police’s conduct.

His detention drew angry denunciations from prominent Israelis and sent hundreds out to protest outside Netanyahu’s residence again Saturday night over what they said amounted to a politically motivated arrest.

Overnight, Haskel became the new face of opposition to Netanyahu. He said the order to arrest him “came from above” and was part of a wider trend under Netanyahu of stifling dissent and undermining Israeli democracy.

“It was not my life-long dream to spend a weekend in a jail cell, but when you fight for something, sometimes there is a price,” said Haskel, a former pilot who fought in the 1973 Arab-Israeli war and logged more than 8,000 flight hours in his lengthy military career.

“The police’s job is to find the proper balance between freedom of expression and public welfare,” he added. “I think the worst damage Netanyahu is doing to us is dividing and inciting us against each other. A society that is torn and divided has no future.”

At his weekly Cabinet meeting Sunday, Netanyahu distanced himself from the affair. He said any allegation that he sought to restrict protests was “absurd.”

“I do not get involved in police decisions,” he said. “At the same time, the laws and regulations of the state of Israel must be maintained. It is not the prerogative of one side to say they support the rule of law and then to trample it.”

Haskel, balding and bespectacled, assailed Gantz and Ashkenazi for reneging on their campaign promises by enabling Netanyahu’s continued rule. But he said he hopes that an upheaval from below will ultimately oust Netanyahu, citing the example of street protests after the 1973 war that pushed then Prime Minister Golda Meir toward resigning.

“He is on trial. He may reach the conclusion that he’d be better off reaching a deal to retire than carry on,” he said. “I have no problem with the right. I have a problem with a prime minister accused of criminal acts.”

Haskel insisted he had no political aspirations and hoped that his arrest, however unpleasant, would inspire others into action to demand change.

Before taking on his newfound role as protest leader, Haskel had initiated a program to take Israeli soldiers to visit former concentration camps in Europe, part of his efforts to educate new generations about the horrors of the Nazi genocide.

“In my research of the Holocaust, I learned something very important. First, it is the tendency of most people to stand on the side. And second is the danger of this standing on the side,” he said. “I felt that when something is bothering me I couldn’t just stand aside.”