A network like no other: How Nokia’s Moon network differs from any on Earth By Aron Heller | Nokia, Friday, 26 Aug 2022 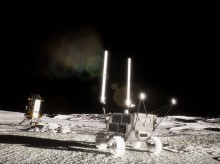 A rendering of the MAPP rover and Nova-C lander on the Moon’s surface, courtesy of Intuitive

Establishing and operating a cellular network in outer space is no simple matter. It requires taking already complicated technologies and adjusting them to otherworldly conditions.

That’s the enormous undertaking of Nokia Bell Labs, which, along with NASA, is seeking to establish the first such network on the Moon.

In previous blog posts, we examined the challenges of deploying an LTE/4G network on the lunar surface and of completing the treacherous journey to the Moon intact. In this blog post, we look at the hardware itself and how our earthly network technologies have been re-engineered for success on the Moon.

While one might be tempted to simply take an LTE network from Earth and operate it on the Moon, in practice, that would almost certainly be a recipe for failure. The components and materials of any terrestrial network may be designed to withstand harsh conditions on Earth, but that doesn’t mean they can withstand the inhospitable vacuum and temperature extremes of the lunar surface.

Our hardware needs to be “hardened” for use on the Moon. Since Nokia’s mission seeks to establish the viability of cellular technologies for future space exploration, our objective is to leverage existing commercial, off-the-shelf technologies and then adapt them for the unique environment of the lunar surface.

That, however, is no easy task and requires a substantial engineering feat. There are issues such as radiation, weight, electrical discharge and thermal management to consider – and there are no technicians on the Moon who can drop by to fix the equipment if something goes wrong. That’s why we are also building backup systems in case any components fail.

In the Nokia Bell Labs mission, the end-to-end system has been optimized for the extreme lunar environment and to minimize size, weight and power. The various components of the LTE network are tightly integrated with the ultra-compact base station mounted on Intuitive Machines’ Nova-C lander, rather than deployed as separate units as they typically are in terrestrial networks. The other key hardware components of the mission are the LTE user equipment integrated into Lunar Outpost’s MAPP rover and two different sets of antennas that provide the connectivity between the lander and rover.

Upon successfully landing on the Moon, our LTE network will operate for up to 12 days, during lunar daylight, enabling surface communications between the lander and the rover. That link will be used to control the rover remotely from Earth when it is not operating autonomously, as well as send back a live video feed, telemetry and network measurements collected across the rover’s multi-kilometer path.

Ensuring that all this will work depends largely on mastering the following factors:

The multipactor effect is a process that happens only in space in which electrons and radiation potentially interact to produce an electrical discharge. This could damage and even destroy a radio frequency device. It can be overcome, however, with proper mechanical design.

We designed an LTE data modem featuring a custom electronics board for high-vibration and a radio frequency frontend enabling extended-range operations in challenging terrains. The modem’s thermal-mechanical design is optimized for heat rejection in vacuum and allows for easy mechanical integration with Lunar Outpost’s MAPP rover.

Every gram launched into space costs a lot of money. So lighter is better. Wherever possible we replaced or modified heavy components with lighter components. For instance, we achieved a fivefold reduction in weight by replacing the heavy cavity filters we typically use in terrestrial networks with a ceramic-based solution.

Because the Moon has no atmosphere, there is nothing to trap ambient heat. That means we need to find ways of extracting and getting rid of heat as the Sun and our own internal components cause network equipment temperatures to rise. We have designed an innovative thermal management solution to handle excess heat through conduction and radiation, rather than the atmosphere-dependent convection techniques we use on Earth.

The isotropic antennas are also custom designed for this mission. Since the Moon is much smaller than the Earth, the horizon is much closer, which means line of sight is much more limited. The rover will also need to navigate the rough lunar surface, which could block its “view” of the lander. Consequently, we designed antennas that maximize the sight lines to the lander while minimizing size and weight.

There are many other challenges we have overcome as well. For instance, we needed to verify that all components work correctly in a vacuum and to make connectors that are reliable in high-vibration situations. With a legacy of overcoming some of the greatest communications challenges to face mankind, Nokia Bell Labs is uniquely positioned to surmount these obstacles.

The lessons learned from this first mission will be invaluable for future space exploration as well as for connectivity in remote parts of Earth. The long-term goal is to eventually deploy a permanent cellular network on the Moon so its future visitors – whether rovers, robots or humans – can easily communicate with voice, video and data applications. Our initial foray to the Moon is the first step toward connecting the far-flung corners of space.

For more on Nokia’s lunar mission, see our Moon webpage.