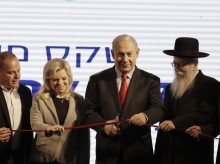 Israeli Prime Minister Benjamin Netanyahu accompanied by his wife Sara cuts the ribbon during the opening ceremony for a bomb-proof emergency room in a hospital in Ashkelon. (AP Photo/Tsafrir Abayov)

ERUSALEM (AP) — Israeli Prime Minister Benjamin Netanyahu is fighting for his political life as a dizzying array of scandals has engulfed him, his family and his inner circle.

Police last week announced they have sufficient evidence to indict Netanyahu for bribery, fraud and breach of trust in two separate cases. And this week, a new case emerged that threatens to be the most damaging of all, after one of his closest confidants agreed to testify against him in an influence-peddling scandal.

Netanyahu and his wife, Sara, have long been saddled with a penchant for expensive tastes and questionable use of public funds. Netanyahu has denied all wrongdoing and accuses the media of orchestrating a campaign aimed at ousting him from office.

But with those closest to him under intense police and public scrutiny, and his typically loyal political allies suddenly turning silent, Netanyahu faces the stiffest challenge yet to his lengthy rule.

Here’s a look at the current cases facing the longtime Israeli leader:

Police have recommended indicting Netanyahu over accepting nearly $300,000 in gifts from Hollywood mogul Arnon Milchan and Australian billionaire James Packer. Police say that in return for lavish gifts that included jewelry, expensive cigars and champagne, Netanyahu had operated on Milchan’s behalf on U.S. visa matters, tried to legislate a generous tax break for him and sought to promote his interests in the Israeli media market.

Police have not commented on what Packer may have received, and Netanyahu has said everything he received were gifts from friends. Attorney General Avihai Mandelblit, a Netanyahu appointee, will make the final decision on whether to file charges — a process that is expected to take several months.

Police have also recommended indicting Netanyahu for supposedly offering a newspaper publisher legislation that would weaken his paper’s main rival in return for more favorable coverage. Netanyahu reportedly was recorded asking Arnon Mozes, the publisher of the Yediot Ahronot daily, for positive coverage in exchange for helping to weaken Israel Hayom, a free pro-Netanyahu newspaper that had cut into Yediot’s business.

Israel Hayom is financed by Netanyahu’s American billionaire friend Sheldon Adelson and largely serves as the prime minister’s mouthpiece. Netanyahu has noted that a proposed law to weaken Israel Hayom never passed, and this week said he had even dissolved his coalition and called a new election in 2015 because of his opposition to the proposal. The attorney general will have to rule on this case as well.

This week two close Netanyahu confidants were arrested on suspicion of promoting regulation worth hundreds of millions of dollars to Israel’s Bezeq telecom company. In return, Bezeq’s popular news site, Walla, allegedly provided favorable coverage of Netanyahu and his family. Nir Hefetz, a former Netanyahu family spokesman, and Shlomo Filber, the former director of the Communications Ministry under Netanyahu, are in custody as well as Bezeq’s controlling shareholder Shaul Elovitch, along with his wife, son and other top Bezeq executives.

Former journalists at the Walla news site have attested to being pressured to refrain from negative reporting of Netanyahu. Netanyahu, who held the communications portfolio until last year, has not yet been named as a suspect in the case but is expected to be questioned. Filber has reportedly agreed to turn state witness against Netanyahu in return for a lesser sentence.

Netanyahu has not been named as a suspect, but some of his closest associates have been implicated in probe related to a possible conflict of interest involving a $2 billion purchase of German submarines. Netanyahu’s personal attorney, who is also his cousin, represented the German firm involved and is suspected of using his influence over the prime minister in return for a hefty cut of the deal.

As if Netanyahu didn’t have enough problems, police said Tuesday that Hefetz, his former media adviser, is suspected of trying to bribe a judge in exchange for dropping a corruption case against the Israeli leader’s wife. Hefetz is suspected of suggesting, through a middleman, to Judge Hila Gerstel in 2015 that she could be appointed attorney general if she dismissed a pending case against Sara Netanyahu’s excessive household spending.

The middleman is also in police custody. The offer never materialized, and Israel’s current attorney general recommended last fall indicting Mrs. Netanyahu for graft, fraud and breach of trust for allegedly overspending more than $100,000 in public funds on private meals at their official residence.

Netanyahu swiftly and angrily denied any suggestion that he made an offer to a potential attorney general as “ludicrous.”