A look at how Israel’s 3rd election in a year could play out By Aron Heller | Elections/Politics, Sunday, 01 Mar 2020 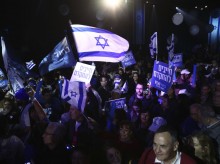 Yet, despite the flurry of activity, public opinion polls are predicting a similar result to the previous two inconclusive elections, leaving a divided Israel deadlocked and neither Prime Minister Benjamin Netanyahu nor his chief challenger Benny Gantz able to build a coalition government with their traditional partners.

Netanyahu’s ruling hard-line Likud party and Gantz’s centrist Blue and White faction are running neck and neck in the polls seeking to become the largest party in hopes of being tapped to form the next coalition. But both appear to have limited options to cobble together the support of a majority of parliament’s 120 members without the backing of maverick politician Avigdor Lieberman, whose Yisrael Beitenu party has flummoxed all sides over the past year.

Netanyahu’s corruption trial is set to begin two weeks after the vote, complicating his future. But Gantz, a former military chief, doesn’t have an easy path to the premiership either.

After the vote, Israel’s largely ceremonial president will choose a candidate for prime minister who he believes has the best chance of putting together a stable coalition. It usually goes to the head of the largest party, but not necessarily.

Here’s a look at the various scenarios that could play out after the March 2 vote:

With Gantz refusing to share power with a prime minister on trial, Netanyahu’s best hope for staying in office seems to depend on his nationalistic base turning out en masse on election day and helping him secure a 61-seat parliamentary majority — without Lieberman.

Other than his own Likud party, he appears to be able to count on the support of two ultra-Orthodox religious parties and the newly unified pro-settler Yamina party. But together that bloc hasn’t been able to reach the magic number in the polls.

The fate of the fringe, ultra-nationalist Jewish Power faction, led by followers of the late rabbi Meir Kahane, who advocated expelling Arabs from Israel and creating a Jewish theocracy, could have a dramatic effect. They are currently polling under the minimum threshold for entering parliament, meaning tens of thousands of votes for them will go to waste. If it manages to push through, or, alternatively, if Netanyahu manages to convince them to drop their campaign, it could put Netanyahu over the top and hand him the reins once again. Netanyahu could use his hard-line majority to pass legislation that derails his upcoming trial.

Israel’s current imbroglio is due in large part to Lieberman bolting from Netanyahu’s right-wing camp after last April’s election. He banked his political fortunes on demanding that a future government shun ultra-Orthodox Jewish parties, which he accuses of long wielding disproportionate political power. Following elections in September, he demanded that Likud and Blue and White unite in a secular government. Neither side agreed to compromise, forcing the new election.

But this time he vows there will be no more elections and his party will pick a side. With Lieberman all but ruling out sitting again under his one-time mentor Netanyahu, it’s increasingly looking like he will align with Gantz. But even with the newly unified leftist list comprising the Labor and Meretz parties, such a coalition would fall short of a parliamentary majority without at least the tacit support of the Arab-led parties.

Gantz has ruled out inviting them into government and Lieberman has rejected even relying on their outside support. The leader of the Joint List, an umbrella group for the Arab-led parties, said they will not back any government that includes their long-time nemesis Lieberman, who has derided Arab lawmakers as terrorist sympathizers.

UNITY (WITH OR WITHOUT NETANYAHU)

Lieberman’s preferred option last time appears off the table as Gantz refuses to partner with the indicted Netanyahu and Likud appears unwilling to part ways with its longtime leader even as he goes on trial. But if Blue and White can score a decisive lead over Likud on election day, and no other scenario presents itself, Netanyahu’s party, or at least part of it, may be inclined to join Gantz to hold on to some form of power. Israeli law requires public officials charged with a crime to step down. But it does not apply to a sitting prime minister, so Netanyahu will likely only back a scenario that leaves him on top.

After more than a year of government paralysis, and little appetite for another costly and exhausting campaign, insiders are hinting that previously unthinkable solutions will have to be found.

With his back against the wall, Netanyahu himself may even be willing to step aside in return for some form of plea bargain that will keep him out of prison.

If all else fails, and everyone sticks to their campaign promises, Israel’s prolonged paralysis could continue, leading to a repeat of the previous post-election standoff and yet another improbable snap vote. Such a scenario would keep Netanyahu in office as caretaker prime minister even as he appears in a Jerusalem court as a defendant.