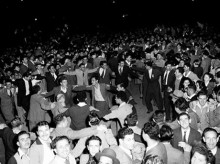 In this Nov. 30, 1947 file photo, Jewish people gather in the streets of Tel Aviv, after the United Nations announcement for a plan of the partition of Palestine and the new Jewish state.(AP Photo/Jim Pringle, File)

JERUSALEM (AP) — The black-and-white photos show masses of people yearning for independence, celebrating a vote recognizing a state in Palestine. It was a day that generations of pupils would be taught to remember with reverence: Nov. 29.

The jubilant revelers were Jews, the year was 1947, and the vote was held in the United Nations General Assembly. The Palestinians rejected the partition plan, which called for Jewish and Arab states to be established after the imminent expiration of the British rule over Palestine. The outraged Arabs soon started a war they eventually lost.

Sixty-five years later to the day, the tables are somewhat reversed: Palestinians have turned to the General Assembly for a second chance — and it is the Israelis who have dismissed the vote, which resoundingly upgraded the Palestinians’ U.N. status, as a symbolic trifle.

The irony of the date was not lost on the Israelis.

“We are the best teachers of the Palestinian people in their struggle for independence,” wrote Eitan Haber, a veteran columnist for the Yediot Ahronot daily. “They have studied carefully the history of the Zionist movement.”

While it’s true that Thursday’s vote won’t immediately create a state of Palestine, it will give the Palestinians a boost, elevating their status from U.N. observer to nonmember observer state — like that of the Vatican. The resolution upgrading the Palestinians’ status was approved by a vote of 138-9, with 41 abstentions, in the 193-member world body.

Anton Salman, a resident of the Palestinian city of Bethlehem in the West Bank, said he hoped international recognition will mark the beginning of a new period that “will begin to build a real state and to recognize our identity as a people with a state and land.”

The vote recognizes a Palestinian state in the West Bank, Gaza and east Jerusalem, the lands Israel captured in the 1967 Mideast war. This represents far less territory than the Palestinians were offered on Nov. 29, 1947, when the U.N. General Assembly passed Resolution 181.

Palestinian President Mahmoud Abbas, in a rare moment of candor, admitted in an Israeli TV interview last year that the Arab world erred in rejecting the plan. “It was our mistake. It was an Arab mistake as a whole,” he said at the time.

Resolution 181 called for the partition of the British-ruled Palestine Mandate into a Jewish state and an Arab state: 33 countries voted in favor, 13 against and 10 abstained.

The resolution was accepted by the Jews of Palestine and set off jubilant celebrations. In a whiff of nostalgia, Israeli TV on Thursday aired grainy footage from that day of people dancing in the streets. Israeli radio interviewed Israeli seniors about their recollections from that day.

It was a strikingly different Israel from today — a place where only several hundred thousand Jews lived, most of them European. Their suits and hats were more suited to Vienna than to the Middle East. Few back then would have imagined the Israel of today — much more Middle Eastern yet also heavily influenced by America, prosperous and powerful beyond the imaginations of most of the revelers of 1947.

After the vote, ecstatic Palestinians in Ramallah and other West Bank towns waved flags, danced in the streets and set off fireworks.

A group of Israeli peace activists held a rally Thursday to support the Palestinian bid in front of the old Tel Aviv Museum, where Israel’s independence was declared in May 1948.

“The choice of date is not accidental. It’s aimed at correcting a historical mistake,” said Mossi Raz, a former Israeli lawmaker and veteran activist. “Sixty-five years ago, the United Nations decided to establish a Jewish state and an Arab state … but it never happened. Today we are completing a historic decision with the establishment of Palestine.”