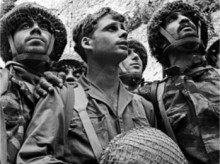 The 1967 lightning-quick triumph over Egypt, Jordan and Syria that tripled the area Israel controlled represented the Jewish nation’s newfound strength and an emotional return to its biblical roots _ and the image became its most powerful symbol.

For Yitzhak Ifat, the blond paratrooper in the center of the famous photo, it was a transcendent moment.

Being next to this remnant of the Temple that after yearning for 2,000 years you see these huge, ancient stones _ it is a total feeling of excitement,” Ifat, now a 73-year-old retired gynecologist, said at his home in central Israel. “It reminded me of my late grandfather who was a religious person. All the history of the Jewish people passed before my eyes when I got there.”

The Western Wall, a remnant of the second biblical Jewish Temple, is the holiest site where Jews can pray. It lines the Al Aqsa Mosque compound, home to Islam’s third holiest shrine. The holy sites in Jerusalem’s walled Old City were under Jordanian control and off-limits to Jews for 19 years.

On the third day of the Six-Day War, three young reservists were frozen in photographer David Rubinger’s frame, after fighting in a series of bloody battles and making their way into the Old City. The moment was preceded by ferocious fights in which the three, members of Battalion 66 of the paratroopers’ brigade, lost many friends.

For Israelis, the image became an emblem of their almost mythical victory and the photo inspires nostalgia among Israelis and many Jews around the world. It has become a fixture on tourist brochures, government stationery and Israeli memorabilia.

It also secured a lifelong bond among its three subjects: Ifat and the two men who flanked him, Zion Karasanti and Haim Oshri. They still meet at least once a year, to catch up and exchange old stories, and have re-enacted their famous pose in the years since. Most recently they met at Rubinger’s funeral in March.

Though rueful that the war did not usher in a more peaceful era he had hoped for, Ifat said he was proud of his role in the fighting and honored to have taken part.

“It was a war of no-choice. It was a war that was forced upon us. It’s not that we made this war. We are not war hungry. But when it was forced upon us we fought and the result is known all over the world,” he said. “We conquered and liberated Jerusalem, which is our pride and joy and the Western Wall that is an integral part of our Temple. And though I am not a religious Jew I think it is important.”

If there is one figure most associated with Israel’s epic vanquishing of Egypt, Jordan and Syria in the 1967 six-day war, it’s probably Moshe Dayan. The eye-patch wearing former general marshaled Israelis forces to victory as defense minister and his self-assured march into the Old City of Jerusalem became one of the most indelible images of Israel’s newfound strength and confidence.

For his daughter Yael, who was then attached to Ariel Sharon’s forces in the Sinai desert, the war symbolized both the best and worst of Israel. It was a validation that Israel was here to stay after nearly two decades of existential angst but also ushered in an era of expansionism and extremism in Israeli society.

“There was euphoria. Even those on the left, like myself, who see the war as something terrible that happened to us did not see it that way at the time,” said the 77-year-old Yael Dayan, a former lawmaker and prominent advocate for women, gays and minority rights in Israel. “The strongest feeling at the time was that this was the last war. It was a great victory, we faced an existential threat, it was a war of ‘no-choice,’ the victims did not die in vain _ but there was a feeling that this victory was our ticket to normalcy and peace with our neighbors.”

She said the vast territories Israel captured, which tripled the size of areas it controlled, were largely seen by decision makers in 1967 as bargaining chips to trade for peace. Despite her father’s militaristic image, she said he never pined for more land and was never driven by any religious motivation.

Ultimately, she said the war proved tragic as the conquest of the West Bank and Gaza Strip in particular evolved into 50 years of settlements, occupation and Palestinian uprisings. “It became a disaster,” she said. “We missed our best chance for peace.”

Dayan said she has not despaired but that Israel’s rightward shift, among other factors, has made the pursuit of peace since then far more difficult and far more costly.

“Instead of turning it (the war) toward a peace agreement and conciliation and a solution of the conflict, we have deepened the conflict and turned Israel into something that my grandparents, my parents, myself, my children, my grandchildren, we did not really build and contribute and sacrifice in order to see the Israel we have today,” she said from her home overlooking Tel Aviv’s City Hall. “I thought that war is a necessity and will give us a feeling of security and will enable us in a postwar effort to concentrate on really fulfilling our potential as a state and as a democracy and the big change is that all these things did not happen.”