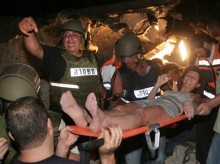 KFAR GILADI,Israel (AP) — A defiant Hezbollah pounded northern Israel with rockets Sunday after rejecting a U.S.-French truce proposal, killing at least 15 people. Israel also struck hard, killing 14 in Lebanon as both sides tried to take advantage of the days before a U.N. resolution is put to a vote.

In the deadliest attack on Israelis in this war, a rocket landed Sunday among reservists near the entrance to the communal farm of Kfar Giladi on the Lebanese border. It killed 12 soldiers heading for battle in Lebanon and wounded five, hospital officials said.

In Lebanon, the dead included five members of one family crushed in their home by an Israeli air strike. Warplanes attacked near Beirut and in the south, where some villages were bombed continually for a half-hour, security officials said.

The fighting has intensified since the U.S. and France proposed a cease-fire resolution on Saturday which could soon be put to a vote in the U.N. Security Council. Both sides seem intent on inflicting maximum damage on each other before the vote.

Hezbollah and its chief allies, Iran and Syria, rejected the draft resolution because it does not call for an immediate Israeli withdrawal from Lebanon and does not address other Lebanese demands.

Mohammed Fneish, one of two Hezbollah members of the Lebanese Cabinet, said Saturday the militant group would not abide by a cease-fire resolution while Israeli troops remain on Lebanese territory.

Some 10,000 Israeli soldiers are fighting several hundred Hezbollah gunmen in that area, trying to track and destroy rocket launchers. Israel says it won’t leave until a multinational force has been deployed.

The U.S.-French plan envisions a second resolution in a week or two that would authorize an international military force and create a buffer zone in south Lebanon.

In Washington, U.S. Secretary of State Condoleezza Rice called the measure “the first step, not the only step.” Israel has not commented, except to say the draft is important.

The proposed resolution says the two Israeli soldiers held by Hezbollah should be released unconditionally. The soldiers’ capture July 12 triggered the war.

Hezbollah has fired more than 3,000 rockets at Israel since the fighting began and dozens hit on Sunday, Israeli officials said. Meanwhile, Israeli warplanes have struck hundreds of targets across Lebanon.

The attack on Kfar Giladi was “a direct hit on a vehicle where there was a crowd. They were all wounded and scattered in every direction, some of them were in very bad condition,” said Eli Peretz, a medic. “It was a very, very difficult scene. I have never seen anything like it.”

Upon hearing of the slain reservists, Israeli Prime Minister Ehud Olmert told the weekly Cabinet meeting, “Lucky that we are dealing with Hezbollah today, and not in another two or three years,” according to a participant.

Three hours later, Israeli warplanes attacked the Lebanese town of Qana and destroyed the launchers that fired rockets on Haifa, the army said.

An Israeli attack on Qana last week killed 29 civilians. After an inquiry, Israel said the attack was a mistake and it would not have struck the building if it new civilians were inside. But it also accused Hezbollah of shielding rocket launching sites behind civilians.

Sunday’s deaths brought to 93 the number of Israelis killed, including 45 soldiers, the 12 reservists and 36 civilians. Israel’s attacks on Lebanon have killed at least 591 people, including 509 civilians, 29 Lebanese soldiers and 53 Hezbollah guerrillas.

Israeli air strikes killed 14 Lebanese on Sunday, including 12 civilians, a Lebanese soldier and a Palestinian militant. In the southern town of Naqoura and several villages near Tyre, residents called rescue officials to report more people trapped under the rubble of crushed buildings, but crews could not retrieve the dead because of continued bombardment.

Explosions rang across Beirut as warplanes fired more than six missiles into Hezbollah strongholds in districts just south of the capital.

Hezbollah announced the deaths of three of its fighters, but did not say when they died. That would bring Hezbollah’s total of fighters killed to 53. But Israeli officials said they have confirmed 165 dead guerrillas _ and even have their names _ and estimated that another 200 had been killed. Israel said some 300 Hezbollah fighters remained in the area Israel was occupying in south Lebanon.

One air strike hit south Beirut just minutes after Arab League Secretary-General Amr Moussa touched down at a nearby airport. Missiles also struck in that area as Syrian Foreign Minister Walid Moallem stood next to his Lebanese counterpart and declared Israel would never defeat the hardened guerrilla force.

Arab League foreign ministers were to meet in Beirut on Monday for a hastily convened session.

Egyptian Foreign Minister Ahmed Aboul Gheit, speaking in Cairo, said the gathering “is a clear message to the world to show the Arab solidarity with the Lebanese people and in support of their demands.”

“As Syria’s foreign minister I hope to be a soldier in the resistance,” said Moallem, the first top Syrian official to visit Lebanon since Damascus ended a 29-year military presence in Lebanon last year.

Lebanon’s parliament speaker and Hezbollah’s negotiator, Nabih Berri, said the plan was unacceptable because it would leave Israeli troops in Lebanon and does not deal with Beirut’s key demands _ a release of prisoners held by Israel and moves to resolve a dispute over the Chebaa Farms border area.

“If Israel has not won the war but still gets all this, what would have happened had they won?” Berri said. “Lebanon, all of Lebanon, rejects any talks and any draft resolution” that do not address the Lebanese demands, he said.

The Lebanese government on Sunday asked the U.N. to revise the draft, demanding that Israel pull its forces out immediately with the end of hostilities.

Iran on Sunday gave its ally Hezbollah a green light to keep fighting in Lebanon, saying that the United States cannot be a mediator in the crisis because of its support for Israel.

Many in the U.S., Europe, the Arab world and Israel accuse Iran of fueling the warfare in Lebanon through Hezbollah, in a bid to show its regional strength. Iran denies it is arming the guerrillas.