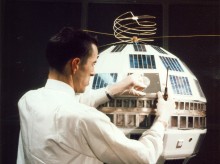 A scientist working on a panel of Telstar

Nokia Bell Labs is boldly going where no one has gone before, building the first-ever LTE/4G network on the Moon. Working with NASA, Nokia aims to demonstrate how commercially available cellular technologies can be used and adapted for future space exploration and pave the way to a sustainable human presence on the Moon.

But it’s not the first time that Bell Labs has, literally, pioneered something out of this world. This week (July 10) marks the 60th anniversary of one of its most historic moments, when Bell Labs and NASA launched into space the first orbiting communications satellite to transmit TV signals. Telstar 1 enabled such signals to travel between Europe and North America, forever changing global communications.

Prior to Telstar, if one wanted to send video footage from America to Europe a recording had to be shipped over by plane or boat. Radio signals and undersea telephone cables could deliver voice, but they simply couldn’t handle the volume of video transmissions. In fact, the first such cable could only transmit 36 simultaneous phone calls at a time.

Suddenly, breaking news, sporting events and video communications could be broadcast live to distant parts of the globe thanks to that seminal satellite. Telstar marked a culmination of groundbreaking Bell Labs innovations to that point, including elements of previous inventions such as the transistor, the solar cell and travelling-wave-amplifying tubes.

Telstar became a pop culture phenomenon, inspiring the 1962 instrumental number 1 hit song by “The Tornados” that was one of the first sci-fi-influenced pop songs.

The satellite was so significant that Adidas named its classic black-and-white soccer ball after it since it resembled Telstar’s spherical, panel-pattern design. Incidentally, the “Telstar” ball debuted at the 1970 World Cup in Mexico, which was also the first time the global event was televised live via satellite. Since a white or solid colored ball was hard for viewers to follow on their black-and-white TVs, the alternating pattern provided a solution to this new way of consuming sports.

We’ve come a long way since then, but even today any live global sporting broadcast owes much to Telstar, the brainchild of engineer John Pierce. A trailblazing scientist in the fields of radio and microwave communication, who later also dabbled in science fiction writing, Pierce began developing the concept for a communicating “large, metalized balloon” in the 1950s. Project Telstar became the embodiment of this idea.

Bruce McGahey was a young Bell Labs technical associate on the project who designed detectors for the solar cell radiation experiment and satellite spin axis control. He fondly recalled the historic sentiment in the days leading up to the launch as he worked on test evaluation for Telstar’s solar cell modules and detectors.

“It was the start of a whole new equation,” said McGahey, now 84. “Between the launch of the Telstar satellite and the cell phone technology that was just being developed for the military, there was this sense that it was going to impact mankind like we’d never experienced before. We now know that this far-reaching impact was true.”

Once launched, Telstar 1 orbited earth nine times a day and to work effectively it had to be within line of sight of both its transmitting and receiving antennas. Thus, it could initially only operate for 20 minutes at a time. But in that short interval it could simultaneously handle voice, data and video. TV networks were granted access to these windows, and the first experiments included the transmission of live images of significant landmarks like Mount Rushmore and the Eiffel Tower.

Shortly after the July 10, 1962, launch, Telstar 1 executed its first live, international news and sporting TV broadcast. It included parts of President John F. Kennedy’s speech at the United Nations and a baseball game between the Chicago Cubs and the Philadelphia Phillies.

“It ushered us into high-capacity communications,” explained Ed Eckert, Nokia Bell Labs’ corporate archivist. “Everything we do when you are talking to someone at a great distance today was made possible by this. Historic events that were happening live could now be broadcast to anybody anywhere and that changed news, sports and video communications forever.”

The 1962 launch came five years after the Soviet Union launched Sputnik 1 as the first artificial satellite. But Bell Labs viewed Telstar as creating a different type of legacy.

“We thought about a peaceful use for space technology, a way to put the world together,” said Eckert. “It was a device that was going to join the world and be able to have live communications anywhere. I think that’s what captured the imagination.”

Telstar 1 solidified Bell Labs’ long association with space exploration, and its pioneering work on the science of radio astronomy proved critical to NASA’s research. Two years after the Telstar 1 launch, a pair of Bell Labs researchers, Arno Penzias and Robert Wilson, discovered cosmic microwave background radiation, which became one of the strongest pieces of evidence to support the “Big Bang” theory of the explosive origin of the universe. The discovery eventually earned them the Nobel Prize in Physics.

Bell Labs was later responsible for system analysis and evaluation for “Project Mercury,” the first U.S. program to put a man in space, and it also offered technical advice to the Gemini and Apollo programs, which eventually landed the first man on the Moon.

As it turned out, Telstar 1 itself remained active for only seven months before it prematurely malfunctioned from the radiation of a high-altitude nuclear test the U.S. conducted. But its legacy lasted for decades, inspiring dozens of more advanced communications satellites that followed, as well as the name of the official 2018 World Cup soccer ball. Though long inactive, the satellite itself continues to orbit around the earth as a relic of the golden age of space exploration.

Sixty years later, we’ve come full circle with Nokia Bell Labs and NASA partnering once more to return to the Moon for an ambitious project that advances our communication technologies.