Indictment, a plan and a pardon: Israeli PM has a wild week By Aron Heller | Associated Press, Friday, 31 Jan 2020 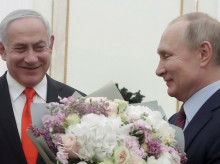 MOSCOW (AP) — When Israeli Prime Minister Benjamin Netanyahu left the White House after the unveiling of President Donald Trump’s Mideast plan, which hugely favors Israel, he and his entourage could barely contain their glee as they boasted of realizing their dream of swiftly annexing large swaths of the West Bank.

But by the time his plane had flown across the Atlantic Ocean, the mood had taken a downturn, with Netanyahu’s annexation plan suddenly in question and an embarrassing criminal trial casting a cloud over his re-election hopes.

Netanyahu’s sojourn to Moscow, to bring home an Israeli backpacker jailed on drug charges that the prime minister had convinced Russia to pardon, capped a roller-coaster five-day journey during which he was also formally indicted on corruption charges.

It’s been quite a trip for Israel’s longest-serving prime minister, who has portrayed himself as a master statesman as he fights for his political survival ahead of March 2 elections.

It began Sunday, with grand proclamations upon departure about the great mission he was on, and about “making history” with Trump. On Monday, he beamed alongside Trump in the Oval Office, flaunting their friendship and lavishing praise upon the American president.

On Tuesday, Netanyahu withdrew a request for immunity before parliament could reject it, triggering the official launch of his trial on charges of bribery, fraud, and breach of trust stemming from three long-running corruption cases. He will now be the first sitting prime minister to face a criminal trial.

Hours later, Trump announced a plan to resolve the Israeli-Palestinian conflict that overwhelmingly favors Israel and appeared to pave the way for immediate annexation of large swaths of the West Bank, including Israel’s many settlements and the Jordan Valley.

Before an adoring audience of evangelical Christians and other supporters, he called Trump the “greatest friend that Israel has ever had in the White House,” and compared the moment’s significance to that of the birth of Israel in 1948.

In a lengthy briefing to journalists after the announcement, Netanyahu laid out a detailed 24-point presentation showcasing all the upsides for Israel and downplaying the heavily restricted notion of Palestinian statehood called for in the plan. He insisted that, at most, the Palestinians would be granted “limited sovereignty that depends on a long list of conditions,” and vowed to bring his West Bank annexation plans to a vote at his next Cabinet meeting, as early as Sunday.

Visiting Israeli journalists from nationalistic and pro-Netanyahu media outlets could be seen dancing outside their Washington hotel in joy.

But on Wednesday, the tide began to change.

In a series of interviews, Trump’s staunchly pro-Israel peace team appeared to tap the brakes on the race to annexation, putting greater emphasis on the prospects of Palestinian statehood that Netanyahu was trying to sidestep. U.S. Ambassador to Israel David Friedman, who days earlier had led Jewish prayer services aboard Netanyahu’s plane, said a U.S.-Israeli committee would need to be formed to insure that any move matches up with the administration’s “conceptual map.”

“It is a process that does require some effort, some understanding, some calibration,” he said. “I’m not going to speculate how long that will take.”

Jared Kushner, Trump’s son-in-law and the architect of the plan, said Israel should wait until after the March 2 elections before annexing territory.

“Let’s see what happens,” he told GZERO Media. “The hope is that they’ll wait until after the election and we’ll work with them to try to come up with something.”

Those comments were likely to stoke fears among Netanyahu’s hard-line allies that the plan will only ever exist on paper.

The Americans appear to be treading cautiously in hopes of gaining international and Arab support for the proposal, which the Palestinians have adamantly rejected.

The Palestinians view settlements in the West Bank and east Jerusalem — territories seized by Israel in the 1967 war — as illegal and a major obstacle to peace, a position shared by much of the international community. They were not a part to the plan’s formation.

Annexation could spark an international backlash, and neighboring Jordan, seen as a key player in Middle East peace efforts, has already warned against it. It could also foreclose the possibility of a negotiated two-state solution. Though Benny Gantz, a former military chief and Netanyahu’s main election rival, has also welcomed the plan he has warned against any “rash, irresponsible measures.”

But a quick move to annex land would galvanize Netanyahu’s hard-line base and shift the focus of the election from his legal woes to his diplomatic achievements.

With Trump’s help, he largely managed to do so this week. His statesmanlike aura was again put on display Thursday, when he met with Vladimir Putin in Moscow a day after the Russian leader pardoned an Israeli tourist whose plight has been closely followed back home.

Naama Issachar, 26, was sentenced to 7 1/2 years in prison after authorities found a small amount of hashish in her bag during a transit stop in April as she returned from a trip to India. In Israel, many have linked her case to that of a jailed Russian hacker who was extradited to the U.S. against Moscow’s wishes, casting her as a pawn in a struggle among world powers.

Putin pardoned her after months of lobbying by Netanyahu.

On Thursday, Netanyahu escorted his wife, Issachar and her mother to his plane on the frigid Moscow tarmac and flew back to Israel, where polls still show him locked in a virtual tie with Gantz ahead of the country’s third election in less than a year. Awaiting him there was a renewed flareup of violence with Gaza militants, and a looming trial that threatened to undermine the week’s dramatic events that he had hoped would help boost his chances of winning the election and extend his lengthy rule.