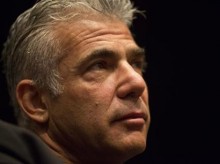 TEL AVIV, Israel (AP) — After bursting onto the political scene with a surprisingly strong showing in Israel’s last election, Yair Lapid said he was bound for the prime minister’s office. But today the telegenic ex-anchorman, actor and novelist hopes to avoid becoming another flash in the pan.

His fledgling party, Yesh Atid or “There’s a Future,” came from nowhere in the 2013 election to capture 19 of the Knesset’s 120 seats, second only to the party headed by Prime Minister Benjamin Netanyahu. But instead of leading his largely secular and middle-class supporters into opposition to battle Netanyahu, he cut a deal to join the prime minister’s government as finance minister — but also wilted his own grass roots support in the process.

On the campaign trail ahead of the March 17 election, Lapid has dumped his previous brash talk of replacing Netanyahu as Israel’s leader and emphasizes he simply wants his party to retain enough votes to be a force in parliament, either back in the Cabinet or in the opposition. He’s hoping that voters forgive him for propping up Netanyahu, and instead credit him as the man whose bitter breakup with Netanyahu’s Likud triggered this early election.

“It’s not about who I want to be, it’s about what I want to do,” Lapid told The Associated Press last week at a late-night Super Bowl party with supporters in a Tel Aviv bar.

Whether there’s a future for Lapid’s barely three-year-old party may seem like a local issue for Israelis alone. But Yesh Atid’s tepid performance in opinion polls is dispiriting for the legions worldwide who want Israel to dump the internationally unpopular Netanyahu. Many still see in Lapid the most charismatic face in a field cluttered with less-than-electrifying leadership candidates.

Having been fired as finance chief two months ago, he now crisscrosses the country attacking Netanyahu with venom and confidence. But he’s assailing every other major party too, suggesting that his camp alone is untainted by criminality and corruption. He uses dry humor to good effect.

“Listen to something amazing,” Lapid tells the camera in his latest campaign ad. “Of all the big parties in the Knesset — Likud, Labor, Jewish Home, Shas, Yisrael Beitenu — we are the only party, the only one, where none of its leaders or members have ever been investigated, suspected of anything, detained, used the right to remain silent, been indicted or sat in prison. The only one. I can’t believe I am listing this as an achievement.”

Analysts and opinion polls suggest Yesh Atid is on course to retain only around 10 seats, still good leverage to join a potential coalition government with the current opposition leader, Labor’s Isaac Herzog. Lurking in the back of Lapid’s mind must be the fate of so many trendy centrist parties — including one founded by his own dad —that blossomed brightly and died just as quickly.

Lapid’s father, former journalist Joseph “Tommy” Lapid, led Shinui to a surprise 15 seats in the 2003 election, but that party disintegrated within three years. The Kadima party, founded by former Prime Minister Ariel Sharon as a centrist alternative to the stalwart Likud and Labor parties, attained power on its first try in 2006 but soon it too exited the stage.

Lapid promises to be different. A youthful 51, with silvery hair and a wide grin, he leveraged his enormous popularity as a TV personality, newspaper columnist and best-selling author to launch Yesh Atid three years ago on a platform promising economic relief for Israel’s beleaguered middle class.

He parlayed mass protests against Israel’s high cost of living into the 2013 election breakthrough. Attracted by Netanyahu’s offer to serve as a reforming finance minister, he soon discovered that the post came with budgetary handcuffs that made him incredibly unpopular: cutting spending, raising taxes and confronting the money demands of the powerful defense ministry.

And as is often the case with new parties, Yesh Atid lawmakers often came across as amateurs, and Lapid was seen as having fumbled the rollout of low-cost housing, his showpiece program.

Dov Lipman, an American-born rabbi and Yesh Atid lawmaker, said Lapid recognizes his party’s many mistakes in its first year of government — and bills this rocky start as a source of inner strength.

“We really believe that if we survived this one, if we survived all these hits, all the negativity, and we come back strong, we are off and running as a party and we will always be a part of the mainstream Israeli political system,” Lipman said.

Supporters also point to the fact that, in 2013, polls did not foresee the size of Yesh Atid’s breakthrough, when a mass of undecided young voters came the party’s way. Lapid hopes first-time voters again make him their choice, and sells himself as the in-touch alternative to the 65-year-old Netanyahu.

At the Super Bowl party, Lapid arrived after midnight to rousing applause and, clad in a black leather jacket, worked a bar filled with American-born potential voters. He took aim at the U.S. cultural credentials of Netanyahu who, with his Massachusetts Institute of Technology degree and strong American accent, long has been considered to be Israel’s pre-eminent U.S.-style politician.

“I think he has lost touch with how America behaves today,” he said. “It is not the America he used to know.”

Some analysts think that to become prime minister someday, Lapid must keep his party in opposition, not propping up the next unpopular government. Netanyahu remains the front runner in a tight race.

“The real test will be if he can go to the opposition, gain some experience and establish himself as a real alternative for prime minister,” said Maoz Rosenthal, a political scientist at the Interdisciplinary Center Herzliya, a college north of Tel Aviv. “Nineteen seats are not realistic this time. But if he can expand his base and rebuild himself in the opposition, he could earn even more in the future.”