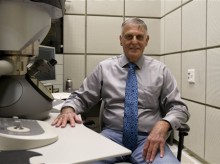 JERUSALEM (AP) _ When Israeli scientist Dan Shechtman claimed to have stumbled upon a new crystalline chemical structure that seemed to violate the laws of nature, colleagues mocked him, insulted him and exiled him from his research group.

After years in the scientific wilderness, though, he was proved right. And on Wednesday, he received the ultimate vindication: the Nobel Prize in chemistry.

“A good scientist is a humble and listening scientist and not one that is sure 100 percent in what he read in the textbooks,” Shechtman said.

The shy, 70-year-old Shechtman said he never doubted his findings and considered himself merely the latest in a long line of scientists who advanced their fields by challenging the conventional wisdom and were shunned by the establishment because of it.

In 1982, Shechtman discovered what are now called “quasicrystals” _ atoms arranged in patterns that seemed forbidden by nature.

“I was thrown out of my research group. They said I brought shame on them with what I was saying,” he recalled. “I never took it personally. I knew I was right and they were wrong.”

The discovery “fundamentally altered how chemists conceive of solid matter,” the Royal Swedish Academy of Sciences said in awarding the $1.5 million prize.

Since his discovery, quasicrystals have been produced in laboratories, and a Swedish company found them in one of the most durable kinds of steel, which is now used in products such as razor blades and thin needles made specifically for eye surgery, the academy said. Quasicrystals are also being studied for use in new materials that convert heat to electricity.

Shechtman is a professor at the Technion-Israel Institute of Technology in Haifa, Israel. He is the 10th Israeli Nobel winner, a great source of pride in a nation of just 7.8 million people. Shechtman fielded congratulatory calls from Israeli President Shimon Peres, who shared the Nobel Peace Prize in 1994, and Prime Minister Benjamin Netanyahu.

“Every citizen of Israel is happy today and every Jew in the world is proud,” Netanyahu said.

Staffan Normark, permanent secretary of the Royal Swedish Academy, said Shechtman’s discovery was one of the few Nobel Prize-winning achievements that can be dated to a single day.

On April 8, 1982, while on sabbatical at the National Bureau of Standards in Washington _ now called the National Institute of Standards and Technology _ Shechtman first observed crystals with a shape most scientists considered impossible.

“I told everyone who was ready to listen that I had material with pentagonal symmetry. People just laughed at me,” he said in an account released by his university.

He was asked to leave his research group, and moved to another one within the National Bureau of Standards, Shechtman said. He eventually returned to Israel, where he found one colleague prepared to work with him on an article describing the phenomenon. The article was at first rejected but was finally published in November 1984 to an uproar in the scientific world.

In 1987, friends in France and Japan succeeded in growing crystals large enough for X-rays to verify what he had discovered with the electron microscope.

“The moment I presented that, the community said, `OK, Danny, now you are talking. Now we understand you. Now we accept what you have found,'” Shechtman told reporters.

Shechtman, who also teaches at Iowa State University in Ames, Iowa, said he never wavered even in the face of stiff criticism from double Nobel winner Linus Pauling, who never accepted Shechtman’s findings.

“He would stand on those platforms and declare, ‘Danny Shechtman is talking nonsense. There is no such thing as quasicrystals, only quasi-scientists.'” Shechtman said. “He really was a great scientist, but he was wrong. It’s not the first time he was wrong.”

Shechtman’s battle “eventually forced scientists to reconsider their conception of the very nature of matter,” the academy said.

Nancy B. Jackson, president of the American Chemical Society, called Shechtman’s breakthrough “one of these great scientific discoveries that go against the rules.” Only later did some scientists go back to some of their own inexplicable findings and realize they had seen quasicrystals without understanding what were looking at, Jackson said.

“Anytime you have a discovery that changes the conventional wisdom that’s 200 years old, that’s something that’s really remarkable,” said Princeton University physicist Paul J. Steinhardt, who coined the term “quasicrystals” and had been doing theoretical work on them before Shechtman reported finding the real thing.

Steinhardt recalled the day a fellow scientist showed him Shechtman’s paper in 1984: “I sort of leapt in the air.”