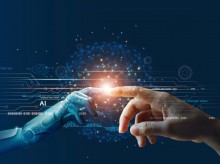 The future is faster than you think

What was once the realm of science fiction is now quickly becoming science fact. Flying cars, bullet train “hyperloops” and mega-rockets transporting you anywhere on the planet in under an hour are no longer whimsies of the imagination but existing machineries that could be commercially deployed this decade.

A spate of converging technologies has produced an exponential pace of advancement without historical precedent. Advances in biotechnology, for example, are overlapping with artificial intelligence and quantum computing to produce a wave of progress that leaves Moore’s Law, the traditional benchmark for exponential progress, in the dust.

We’re not talking about the year 2525, when Zager and Evans wondered “if man is still alive, if woman can survive.” The year 2025 is just four years away, but here are some trends that experts predict will by then already be part of our new reality:

These rapid changes, and many more, can seem alternatively exhilarating and petrifying, upending centuries of behaviors in a matter of years. As the fourth industrial revolution unfolds, we can expect these electrifying opportunities to offer the potential of solving some of the world’s most pressing issues, like feeding a growing global population, improving access to healthcare and reducing carbon emissions.

The future of shopping, advertising, entertainment, education, insurance, real estate, finance and food will never be the same. At the same time, our humanity could be tested, with robots poised to replace many of the functions of our fellow man and woman. The Covid-19 pandemic and its vast consequences have only supercharged these various trends.

Here at Nokia, we are an active part of the movement. We do much more than just connect the world today. We also lay the foundations of automation, infrastructure and networks of tomorrow as a pioneer in 5G technology that will reshape our world in the coming decade. In fact, our goal is “bringing together the world’s intelligence” in an era in which pressure on the planet is increasing, productivity is stalling and access to opportunity remains unequal.

Whether setting up a mobile network on the moon for NASA or imagining the era of 6G technology, Bell Labs drives Nokia’s push to the future. Its slew of disruptive research ranges from robotics to artificial intelligence to autonomous software systems.

And across the company we are establishing the Internet-of-Things marketplace, digitizing heavy industry and building smart cities.

The future is unknown. But perhaps the only certainty is that technology will be a big part of it.

Already a third of all data passes through the cloud and over 90% of the world’s data has been created in just the last couple of years. By 2025, the number of IoT devices is expected to exceed 25 billion.

With the technological world upon us, data is the new fuel. The world is moving toward “internet for all,” even to the planet’s most inaccessible areas. The scope exceeds beyond even Planet Earth itself, with a new space race underway not between nations but rather tech titans, as Jeff Bezos and Elon Musk compete to colonize other moons and planets this decade. A boon in virtual reality and brain-computer interfaces look to transform the existence of those who remain.

All this creates an innovative environment that is generating research into “Back to the Future-like” gizmos such as:

With technology ever-present there is more to come and by 2025 we are likely to face a reality that was unimaginable to most not too long ago.