The Haredi elephant in the room of Israel’s coronavirus crisis By Aron Heller | Freelance, Wednesday, 13 Jan 2021 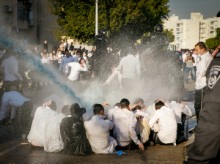 Ultra-Orthodox residents of Ashdod clash with police who were dispatched to shutter a yeshiva that was operating in violation of the government lockdown on January 11, 2020. (Flash90)

The virus and its consequences have focused a spotlight on fault lines that have been ignored for years. But instead of providing a wakeup call, few in power seem willing to seriously confront it. Op-ed published in The Times of Israel.

COVID-19 is a deadly virus. It can target our vital organs, choke our flow of oxygen and slow down our system.

But what it does to the body pales in comparison to what it does to a society. Just as with individuals, societies with pre-existing conditions are those that are most vulnerable. No one has escaped its wrath. However, if a nation already had a stress point, the coronavirus was likely to find it and exacerbate it.

Countries across the world have discovered this firsthand, with the virus pouncing of the soft underbelly of each to create unprecedented national health and economic crises.

Israel has been no exception. Its most glaring weaknesses have also been exposed.

Let there be no mistake: Israel’s COVID-19 elephant in the room is the country’s cloistered ultra-Orthodox community. No one else should be let off the hook. But it’s the Haredi failure to comply with government restrictions that has caused the coronavirus to spread in their communities at rates of up to eight times faster than elsewhere in Israel.

The recent record-pace vaccination drive to reach herd immunity has elicited a nostalgic nod to the days when ingenuity and mutual assurance were hallmarks of Israel’s “we’re all in this together” mentality that got us through wars and waves of violence.

But even if the national inoculation project succeeds it will not be able to erase the failures that preceded it, namely a rate of contagion that, relative to its size, was among the worst in the world and has now led to a third national lockdown in under a year.

It’s no secret that Israeli society’s most glaring domestic weaknesses are its unstable political system, the outsize influence of an insular ultra-Orthodox community resistant to progress and vast gaps in wealth, education and stake in bearing the national burden.

Experts have repeatedly warned these pose a dire threat to Israel’s long-term social and economic prospects. The virus and its consequences have just focused a spotlight on fault lines that have been ignored for years. But instead of providing a wakeup call, few in power seem willing to seriously confront it.

Overall, experts estimate the ultra-Orthodox account for about one-third of all coronavirus cases despite making up just 12 percent of the population.

The high population density of Haredi neighborhoods, and perhaps limited exposure to outside sources of information, helped explain this discrepancy during the first outbreak last spring. But further research has clarified this is no longer the case.

The Shoresh Institute for Socioeconomic Research found that the primary source of higher infection rate in Israel’s hardest hit localities during the second wave derived from the percentage of Haredim in that municipal population rather than density per se. The former was far more of a factor, 48%, than the latter, 9%, this compared to a reverse 23% to 43% ratio in the first wave. Furthermore, their findings suggested that 23% of additional infections now were due to a lower share of academic degrees in the population.

“Proliferation during the second wave was due primarily to behavioral differences,” explained Ayal Kimhi, the author of the study. “Segments of the Haredi population remained oblivious to the laws and regulations. This highlights the importance of both explaining the social distancing directives and strictly enforcing them.”

The Israeli government’s failure to enforce, and model an example of, its own directives is nothing new, nor is much of the population’s lackadaisical regard for rules and lack of faith in state authorities. It’s merely the stakes that are now far higher.

The Arab community has also seen high contagion rates, dangerous gatherings for mass weddings and a spotty record for vaccinating, perhaps due to its own suspicion of government following years of perceived deprivation. But theirs are individual violations, where people are defying the leadership’s advocacy for compliance.

Only in the Haredi sub-sector is this flouting of rules so blatant and widespread. This can only be explained as a result of years of facing no consequences for similar such behavior.

As perennial political kingmakers, their leadership has leveraged disproportionate clout to maintain a segregated lifestyle for followers that has both limited their flock’s own individual prospects and enraged the country’s secular majority. Whether it’s mandatory military service, a basic school curriculum or taxpayer-funded handouts, there is one set of rules for the ultra-Orthodox and another for everyone else.

That’s why the government has refused to follow its own “traffic light” system by proportionally shutting down especially hard-hit, mostly Haredi, municipalities and instead opted for imposing blanket restrictions on everyone. This week’s violence in Ashdod also highlighted government fears of what can happen when the state tries to enforce its own rules.

The Haredi leverage has historically led to coercion of secular Israelis not just in matters of marriage, burial and conversion, but in almost every facet of life. It ranges from little things like exempting family-size plastic bottles from a deposit to huge economic socio-economic policies like dictating which businesses and services can operate on Shabbat and extorting child-allowance payments in a country whose physical, transportation and medical infrastructure is already overstressed by overpopulation.

In the age of the coronavirus, this phenomenon has translated into direct harm to everyone’s health, livelihood and well-being.

It’s hard to blame the Haredim themselves. Their pious lives revolve around communal prayer and study, and mass weddings and funerals are central to their lifestyle and belief system. Most are merely following their rabbi’s instructions.

It’s even hard to accuse the Haredi leadership of anything sinister. They are merely succeeding in doing what everyone else tries – to work the system to their advantage.

It is the state’s job to consider the common good of all, rather than creating a wedge in the country by allowing the fringe to dictate the agenda. It’s one thing for leaders to issue confused and contradictory guidelines. It’s another to set long-term national priorities based on petty political calculations.

With Prime Minister Benjamin Netanyahu’s political and personal fortunes directly tied to his alliance with the Haredi-led parties, and no feasible alternative to a coalition without them, it’s hard to see this trend changing.

As we experience another painful lockdown, it appears the main form of solidarity remaining in Israel these days is the willingness of the many to keep paying the price for the intransigence of the few.

The ultra-Orthodox are the fastest growing group in Israel. Until they are treated as equal citizens, with the same rights and obligations, Israeli society will continue to be dangerously divided and compromised, and it will remain so long after the pandemic has passed.