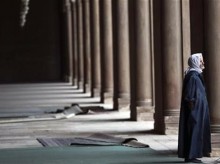 An Egyptian Muslim pauses inside Ahmed Ibn Tulun Mosque, one of the oldest mosques in Cairo. (AP Photo/Mosa'ab Ehsamy)

CAIRO (AP) — Amid Cairo’s cramped mass of humanity and traffic, with its incessant honking and haggling, visitors will be hard-pressed to find some solitude. But if you’re willing to go off the beaten tourist track a bit, serenity can be found.

The expansive Mosque of Ahmed Ibn Tulun is not as famous as Al-Azhar Mosque or the Mohamed Ali mosque inside the Citadel fortress, but it’s a rare oasis of silence in one of the world’s busiest, and loudest, cities. The mosque, completed in 879, is considered the oldest in Cairo that has survived in its original form, and the third largest in the world by area. Local legend claims it was built on the hill where Noah’s Ark landed after the flood.

Upon entering, you encounter the huge square plaza, surrounded by four shaded pathways that include patches of green rugs for prayer and long lines of hanging lanterns. The arches between the columns showcase a variety of sculpted patterns. If the backdrop looks familiar to movie buffs, it’s because Roger Moore confidently strolled down these pathways as James Bond in a memorable scene from “The Spy Who Loved Me.”

It’s not unusual to find only a handful of other visitors on site and the unexpected quiet allows one to observe the various formations of shadows and the rays of light creeping through the intricately carved stone windows. The only noise here is that of the birds chirping from the rafters.

Once you’ve absorbed the calming karma of the courtyard, you can ascend the minaret’s exterior stone staircase where a panoramic, albeit hazed-by-pollution, view of Cairo is revealed and you can take in the sheer expanse of the sprawling metropolis. From this vantage point it’s easy to see why Cairo is known as “the City of the Thousand Minarets.” The vista of mosques, broken roads, bumper-to-bumper traffic and roofs littered with satellite dishes will remind you of the intensity from which you have just escaped.

Entrance to Ibn Tulun mosque is free but donations are gladly accepted and actively encouraged from the men who attach cloth bags to your shoes in deference to the site’s sanctity.

Within the same compound one can include a visit to the Gayer-Anderson Museum, which boasts an impressive collection of Egyptian artifacts and relics. It provides a glimpse into the life of history-obsessed retired British officer John Gayer-Anderson — who made it his home — and offers perhaps the best example of domestic Cairo architecture. The museum is built from two houses dating back to the 15th and 16th century and is connected by a bridge supported by the outer wall of the mosque. Highlights include an internal well, rooms devoted to the varied Chinese, Turkish and Syrian oriental styles and a courtyard that has another unlikely feature for Cairo — green grass. The rooftop terrace is impressive and has been used as a set for several movies, including the Bond one where Moore battles a henchman on it and then flings him off the roof.

The museum, too, can be quite empty, with an accompanying guide turning on the lights of each room for a lone visitor. Entrance costs 40 Egyptian pounds (about $5). But it’s worth a visit if only to prolong a relaxed outing before heading out once again into the hectic streets of Cairo.

MOSQUE OF AHMED IBN TULUN: 4 Maydan Ibn Tulun, off Abd al-Magid al-Labban (Al-Salbiyya) Street in the Sayyida Zeinab neighborhood. Best way to get there is by taxi.