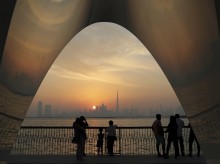 DUBAI, United Arab Emirates (AP) — In an unmarked villa, nestled amid homes in an upscale Dubai neighborhood, a congregation prays in the first fully functioning synagogue in the Arabian Peninsula in decades.

Though its members keep its precise location secret, the synagogue’s existence and the tacit approval it has received from this Islamic sheikhdom represent a slow rebirth of a burgeoning Jewish community in the Persian Gulf, uprooted over the decades after the creation of Israel.

The United Arab Emirates’ rulers have sought to boost the community by hosting interfaith events and pledging to build a massive multi-faith complex that includes a synagogue, part of their efforts to burnish the country’s image to the West. Meanwhile, ties between Gulf Arab states and Israel slowly warm over their mutual enmity of Iran, though concerns about the future of the Palestinians remain a wedge.

Yet even with the challenges, leaders of the Dubai congregation say they represent a new, growing presence that could offer a hopeful glimpse into the future.

“We have slowly found our place in the ecosystem of the UAE,” Ross Kriel, the president of the new Jewish Community of the Emirates, told The Associated Press. “It reflects our optimism about the future of the UAE as a place for us to commune, contribute and flourish.”

Thriving Jewish communities in the region once stretched from the neighborhoods of Baghdad and Tehran down to the island nation of Bahrain, and from the eastern coast of Oman, home to a purported tomb of the Prophet Job, to Yemen’s southern shores. But the war surrounding the 1948 creation of Israel, and the hundreds of thousands of Palestinian refugees it generated, saw both Arab rulers and their public turn against their Jewish neighbors. Iran’s 1979 Islamic Revolution also saw Shah Mohammad Reza Pahlavi, who acknowledged Israel, replaced by a Shiite theocracy that views the state of Israel as an enemy, with tens of thousands of Jews fleeing.

A small Jewish community still lives in Iran today, with a few families in Bahrain. Their synagogues and others are mostly scattered relics of the past.

But the UAE, a federation of seven sheikhdoms, was only founded in 1971 and had no significant history with Jews. While still not acknowledging Israel diplomatically, Emirati officials have allowed Israeli officials to visit and the Israeli national anthem was played after an athlete won gold in an Abu Dhabi judo tournament. Next year, Israel will take part in Expo 2020, the world’s fair being hosted by Dubai.

Jewish life in the Emirates now revolves around the Dubai villa, where an eclectic group of visitors gather for weekly prayers, kosher meals and holiday celebrations. The house’s living room serves as the main sanctuary, where the Torah scroll is read and prayers are recited. The upstairs living quarters offer overnight accommodations for observant visitors who don’t travel on the Sabbath.

The synagogue has hosted Bar Mitzvah ceremonies and performed Jewish circumcision rituals for newborn boys. Neighbors haven’t complained of its presence, even after recent Jewish New Year celebrations included some boisterous blowing of the shofar, or ram’s horn.

Services are conducted in Orthodox fashion, with separate seating for men and women, but the groundbreaking congregation welcomes all. Last week, the community erected a temporary outdoor hut in the backyard called a sukkah, marking the weeklong Jewish festival of Sukkot, or Feast of Tabernacles. The holiday commemorates the Jews’ desert wandering after they were freed from Egyptian slavery, a symbolism not lost among members at the Jewish community’s new Arabian home.

However, the community remains cautious and many asked not to be identified. An AP reporter had to agree not to photograph the synagogue or describe its location before visiting. Kriel himself praised the embrace of the UAE, and said he felt very safe in Dubai, but still refrained from wearing a Jewish skullcap on the street.

“Although our community is very unique in the Jewish world, we have not wanted to sensationalize our presence here,” he said. “Our future vision is a Jewish community that is not just considered a normal feature of life in the UAE but is considered to be a place where Jews flourish.”

The Emirati government this year has marked what it calls “The Year of Tolerance,” which included a visit by Pope Francis, an interfaith conference including American rabbis and Christian evangelicals and the creation of a Ministry of Tolerance.

As part of the effort, it announced plans to build the Abrahamic Family House in Abu Dhabi, which will house a mosque, a church and a synagogue. Fitting of a country that boasts the world’s tallest building, massive shopping malls and the world’s busiest airport for international travel, it is being touted as the most expensive Jewish house of worship ever built, estimated to cost hundreds of millions of dollars.

“Whether of sect, or religion, intolerance has proved to be the primary source of conflict and extremism,” said Omar Ghobash, an Emirati assistant minister for cultural and public diplomacy. “The UAE has been in the forefront in challenging these forces, by building a diverse, modern, progressive and stable society, which promotes integration. We see this as much as an opportunity as a responsibility.”

The UAE’s tolerance push, however, does not extend to decriminalizing public protest, allowing political parties or halting a prolonged crackdown on Islamists, whom the nation’s hereditary rulers view as a threat. The Emirates has long relied on the West, particularly the U.S., as a bulwark against Iran. Religious tolerance efforts offer something for Emirati diplomats to point to in Washington as the Pentagon keeps 5,000 U.S. troops stationed here and relies on Dubai’s Jebel Ali port.

Despite that, Yehuda Sarna, the newly named chief rabbi of the UAE’s Jewish community, said the country has genuinely become “a major global hub and point of encounter between religions.”

“We are being invited to that encounter,” he said. “Are we going to dwell on the past or look to the future? I feel that this history has yet to be written and we are going to write it by living it.”