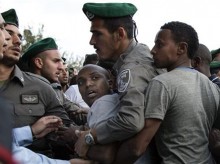 JERUSALEM (AP) — When Israel secretly airlifted waves of Ethiopian Jews in the 1980s and 1990s, saving them from war and famine in the Horn of Africa, it was celebrated as a triumphant show of unity for the Jewish people.

Thirty years after the first large groups of Ethiopians arrived, few in the community are celebrating. Israel’s black Jewish minority is plagued by poverty, crime and unemployment, and their brewing frustrations over racism and lack of opportunity have boiled over into an unprecedented outburst of violent anti-police protests.

The unrest has laid bare the struggles of absorption and the rocky attempts of the state to integrate them into a society for which they were ill-prepared. Caught off- guard, Israel’s leaders are vowing to respond to the community’s grievances.

“We must look directly at this open wound. We have erred. We did not look, and we did not listen enough,” said Rivlin, whose largely ceremonial office is meant to serve as a moral compass.

On Sunday, protesters shut down a major highway in Tel Aviv, hurled stones and bottles at police and overturned a squad car. They were dispersed with tear gas, water cannons and stun grenades. More than 60 people were injured and 40 arrested in the second such protest in recent days, and demonstrations are expected to continue.

The unrest followed video that emerged last week of an Ethiopian Israeli soldier being beaten by police in what appeared to be an unprovoked attack.

Prime Minister Benjamin Netanyahu met Monday with community leaders and with the soldier who was attacked, telling him “we’ll have a change a few things.” Closing the gaps in Israeli society, however, will be a difficult task.

Ethiopian Jews trace their ancestors to the ancient Israelite tribe of Dan. The community was cut off from the rest of the Jewish world for more than 1,000 years.

Under its “Law of Return,” Israel grants automatic citizenship to any Jews. In the early 1980s, after a period of debate about recognizing the community as Jews, Israel covertly began to bring in thousands of Ethiopian immigrants. In 1991, thousands more came in a secret airlift carried out over two days.

The new arrivals struggled greatly as they made the transition from a rural, developing African country into an increasingly high-tech Israel. Over time, many have integrated more into Israeli society, serving in the military and police and making inroads in politics, sports and entertainment. Some prominent community figures speak Hebrew without a trace of an accent and are indistinguishable from other Israelis in everything but skin color.

Overall, however, the Ethiopians are an underclass. Many complain of racism, lack of opportunity and routine police harassment.

About 120,000 Ethiopian Jews live in Israel today, a small minority in a country of 8 million. Many older Ethiopians work menial jobs — men as security guards and women as cleaners and cashiers. They live with their families in rundown city neighborhoods and impoverished towns with high rates of crime and domestic violence.

Their children have made gains, but overall, the younger generation is still struggling.

Ethiopian Israelis also allege repeated discriminatory slights and, at times, outright racism. In the late 1990s, it was discovered that Israel’s health services were throwing out Ethiopian Israeli blood donations over fears of diseases contracted in Africa. Some landlords have also refused them as tenants, and accusations have been raised that Israel has deliberately tried to curb their birth rates.

“Anyone who attended the protest yesterday experienced at one point in their life humiliation based on nothing but skin color,” said Mehereta Baruch-Ron, a Tel Aviv deputy mayor of Ethiopian descent, who added that police did not believe she was a city official and blocked her from joining the protest. “We have had enough. It is time to do something.”

Job Goshen, an Ethiopian Israeli social worker who works as a job counselor, said the problems stem from decades of well-intentioned but flawed policies.

He said that while the government encourages Ethiopians to enter the labor force, it also imposes unnecessary job requirements that make it difficult for them to get hired. He said a truck driver’s license, for instance, requires a computerized “theory” test that poorly educated Ethiopians struggle to pass.

“Most of the older Ethiopians don’t have the education. But they have other abilities that are not taken into account,” he said. “As a result, they are stuck in the same jobs — services, security, cleaning — and they don’t get ahead.”

Younger Ethiopians are better equipped for the work world, he said, but also face their own unique challenges, especially after completing compulsory military service.

Unlike their other Jewish counterparts, Ethiopians do not have parents and siblings who can steer them toward university studies or good jobs after leaving the army. Many come from large or broken homes and must support their parents or younger siblings. Goshen said that while he has not experienced overt racism, his friends, relatives and clients all have.

Fixing these problems will be a long process that will require the government and the community to work together.

“It has to come from both sides,” he said. “The government can’t impose a solution. It has to consult with us.”

Shlomo Molla, a former lawmaker of Ethiopian origin, said hope for change lies with the generation born in Israel and less intimidated by the establishment.

“I call upon these young people to continue resolutely, so that perhaps they might succeed where my generation failed,” he wrote in the Maariv daily. “The next stage of this battle should be civil disobedience. We should stop enlisting in the army, not join the police, and stop paying taxes, because if the state doesn’t take its citizens into account, the citizens are also permitted not to take the state into account.”

Stephane Dujarric, the spokesman for the U.N. secretary-general, told reporters Monday that “the fight versus racism and discrimination is a universal one. Obviously, people have a right to demonstrate peacefully, and we encourage the Israeli authorities to deal with the issues.”

The images of black Israelis clashing with police have drawn comparisons to the unrest in the U.S. following deadly altercations between police and black men or boys.

But Fentahun Assefa-Dawit, executive director of the advocacy group Tebeka, said there were few similarities. He said Ethiopian-Israelis have a different set of issues related to integration into Israel’s modern, fast-paced society — as opposed to maintaining a distinct subculture.

He called on Netanyahu to make Ethiopian absorption a keystone of his new administration, which is expected to take office in the coming days.

“Before it is too late, we call on the prime minister to take the matter into his own hands,” he said. “In four years, I would want to see this prime minister say ‘I’m glad I did’ instead of ‘I wish I had.'”