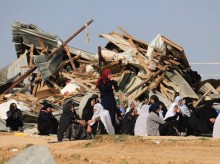 UMM AL-HIRAN, Israel (AP) — On a wind-swept hilltop in this Bedouin village, a cracked solar panel lying atop a mattress and slabs of broken concrete provide an eerie reminder of a clash that has come to symbolize the strained relations between Israel’s government and its Arab minority.

On a frigid January morning, Yaakub Abu al-Qiyan was shot dead as his jeep swerved into Israeli police who had come to demolish his illegally built home. At the time, police called the 47-year-old schoolteacher a terrorist with ties to the Islamic State group. But officials now acknowledge he may have rammed into the forces unintentionally and that his fatal shooting could have been a mistake.

For residents of Umm al-Hiran, the prospect of clearing Abu al-Qiyan’s name provides little comfort. They say the court-ordered evacuation was just the latest instance of decades of mistreatment toward the formerly nomadic Bedouin, who are now Israeli citizens.

“The police came charged. They came scared,” said Salim Abu al-Qiyan, a 58-year-old cousin and member of the local council. “I am against the word ‘mishap.’ This is not a car that broke down. This is an intentional shooting.”

The Abu al-Qiyan clan was resettled on state-owned land in the southern Negev desert 60 years ago, but is now being asked to relocate to a government-designated township. It is part of a regional plan that Israel says will organize dozens of scattered Arab communities and provide them with much needed services and infrastructure currently unavailable in their unrecognized villages.

But part of the village slated for demolition is zoned for a new development catering to religious Jewish families with ties to the West Bank settlement movement, raising suspicions among the Bedouin.

“This place has been cleared for building. Why for Jews and not for me?” said Salim Abu al-Qiyan, sitting inside his sparsely furnished trailer home. “Why does this home have to be ruined and a Jewish home built in its place?”

Arabs make up about 20 percent of Israel’s 8.5 million residents. They are Israeli citizens but frequently face unfair treatment in areas like jobs and housing. Many Israeli Jews view them as disloyal because they largely identify with the Palestinians, and some have openly sided with Israel’s enemies. Making up just a small part of Israel’s diverse Arab minority, Bedouin tend to be at the bottom of the socio-economic ladder, although they are among the few who are willing to serve in the army.

Tensions have grown since the 2015 election, when Prime Minister Benjamin Netanyahu galvanized supporters by warning that “Arab voters are going in droves to the polls.” He was accused of racism and later apologized. His Minister of Internal Security, Gilad Erdan, has also been accused of stoking tensions by accusing Arabs of being behind a wave of massive forest fires last year.

Israel’s Justice Ministry says four Arabs have been indicted on arson charges connected to those fires, but none were charged with politically-motivated crimes.

The government vowed to crack down harder on illegal Arab construction after a court order forced it to evacuate Jewish settlers from an illegally built West Bank outpost — angering a key constituency.

Arabs say the equivalency is false. Israeli settlers are allowed and often encouraged to build on occupied territory, while Arab citizens face long-standing state-imposed barriers to acquiring permits to build inside Israel itself.

In Umm al-Hiran, their anger deepened when police arrived before dawn on Jan. 18 to demolish 14 structures. The police came heavily-armed and in riot gear — in stark contrast to the non-confrontational approach used to evacuate the settlers, said Salim Abu al-Qiyan.

That morning, police reported that an Israeli Arab rammed his vehicle into a group of police officers, killing one of them before he was fatally shot. Subsequent statements referred to Abu al-Qiyan as a terrorist who had incited schoolchildren and may have been influenced by the Islamic State group. As evidence, they provided a copy of a Hebrew-language newspaper found in his home that included an article about IS.

But residents said Abu al-Qiyan was just trying to get away and lost control of his vehicle after he was shot. His brother, Ahmad, said he was “murdered in cold blood,” and a number of rights groups accused police of using excessive force. The solar panel, mattress and slabs of broken concrete are all that remain of the home.

Police refuse to comment until the official report is published. However, officials in the Ministry of Internal Security, which oversees the police, said officers had intelligence about a potential vehicular attack and incitement to violence by Arab leaders.

Erdan’s office said the minister had to back the police, but that he would apologize if the inquiry proved they erred.

Ayman Odeh, head of the Arab bloc in parliament, called the clash a “terrible chapter in a much larger story, one of discrimination and segregation in the Negev.”

He said he arrived at the scene to demonstrate against the evacuation and after identifying himself as a member of parliament was attacked by overzealous police who pepper-sprayed him in the eyes and then shot him in the forehead and back with high-density, foam-covered bullets.

The police claimed Odeh was struck by rocks thrown by fellow demonstrators, although foam bullets were found on the ground. Erdan accused him of inciting the violence and having the blood of the dead police officer on his hands. Just recently, Defense Minister Avigdor Lieberman said there was no reason for people like Odeh to be Israeli citizens.

“All of this is part of Netanyahu’s strategy to incite against Arab Palestinian citizens and to portray us not as citizens but as enemies of the state,” Odeh said.

Today, the village’s 400 residents remain in limbo in dozens of shacks and makeshift concrete houses.

Like some 100,000 others who live in the 35 southern Arab villages unrecognized by the state, they aren’t connected to water, electrical grids, paved roads or school systems and have to rely on the services of the nearby township of Hura, a 10-minute drive away. A small mosque serves as the center of activity, with generators and solar panels providing most of their energy needs.

Meanwhile, work is already underway on the future Jewish town of Hiran.

Salim Abu al-Qiyan said residents have lost faith in police and live in constant fear of losing their modest homes, but believe it isn’t too late to find a suitable alternative.

“The government can fix it. They need to come, sit with the people and talk to them and look them in the eye,” he said. “We have no problem living Jews and Arabs next to each other.”