My first month at Nokia: A crash course in disruption By Aron Heller | Nokia, Wednesday, 11 Nov 2020 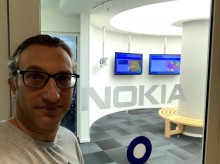 The new office in Kfar Saba.

To mark my first month at Nokia, it seemed fitting to pause for a moment to summarize my initial observations about the stark transition I made from the world of journalism.

There is a lot to absorb in this personal and professional upheaval, ranging from the new jargon through the meetings-centric working environment to the advanced personal tech and even the office culture of ordering in catered lunches. With my pen and notepad in hand, I am indeed a strange bird in a strange land.

But if I had to recap everything in a single word it would be this: disruption.

Where I come from, disruption is a bad thing. I grew up on the principle that “if it ain’t broke, don’t fix it.” If you were disrupting, you were probably bothering or ruining. Just look at some of the word’s default synonyms: disturbance, commotion, trouble, interruption, distraction. How could any of this be positive?

And yet, in high-tech, disruption is a virtue. Disruptors are lauded and envied and those who shake things up are congratulated, even hailed as cult heroes. In the high-tech atmosphere nothing seems to be left well enough alone, and there’s a constant striving to alter and innovate. That’s where great ideas come from and that’s the way the world progresses. But, on an individual level, it can be unnerving, unsettling and, frankly, quite scary.

I got my first taste of this uncertain environment when, before I had even acquired a basic grasp of the massive organization I had joined, Nokia’s new president and CEO announced a major shakeup in which my department of Nokia Software was to be merged with another business group. I could sense the concern among my new teammates, even those who were veterans of the industry.

Though my angst still mostly revolved around the small stuff, like figuring out the internal messaging system, I also tapped into the ambiguous aura surrounding me, particularly when I learned that the top executive who had advanced my hiring wouldn’t be keeping his old job.

As I pondered the individual disruption I was experiencing, I also came to realize that I was not alone. This is the new normal. Even some of the world’s most advanced companies and tech entities are struggling to adjust to this global era of constant disruption.

In fact, I discovered that Nokia Software’s primary mission is to help customers embrace this disruption and turn it into an opportunity by building a blueprint that combines flexible infrastructure, intelligent automation and end-to-end security to help them weather these dizzying changes.

This cuts to the core of the Fourth Industrial Revolution we are currently experiencing, in which dramatic advances in robotics, artificial intelligence, biotechnology, 5G networks and Internet of Things are creating an increasingly interconnected and automated world. The speed of these breakthroughs increases exponentially and is without historical precedent.

Despite the threat of all these changes chipping away at our humanity, and stoking fear of a Terminator-like future, I’m also learning about all the ways these disruptions can eventually make the world a better place and hopefully provide sustainable solutions to challenges of inequality, climate change and other environment woes.

In the meantime, I’m learning a ton about the telecom industry and the advanced technologies that connect the world. And I’m discovering, and writing about, how Nokia’s own people are using their tech skills for good.

I’m slowly gaining confidence and taking joy in small victories, such as helping one of our top digital business managers connect to the office’s secure WiFi network.

My first month ended with perhaps the greatest disruption of all – a historic U.S. election that was decided in a most un-techie fashion, with election officials methodically hand-checking mailed-in pen-and-paper ballots.

As the New York Times’ Shira Ovide keenly observed, technology, with all its upside, is not magic, and it could not provide salvation from the age of Trump.

“Technology didn’t matter so much for the most important stuff,” she wrote. “Technology is not the answer. We are.”

After covering wars and elections, I know it will take some time for me to feel truly comfortable in my new surroundings. But I’m hopeful that, just like for the outside world, great new things will grow from this disruption.