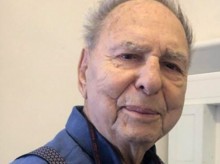 This undated photo provided by the family of Arie Even, shows Israeli Holocaust survivor Arie Even. On March 20, 2020, the 88-year-old became Israel’s first coronavirus fatality. (Family of Arie Even via AP)

JERUSALEM (AP) — As a child in Hungary, Arie Even survived the Holocaust by taking shelter along with his mother and brother after his father was shipped to a notorious concentration camp.

Even’s well-connected grandfather found them refuge in a Swiss-protected home in Budapest before they were rushed to another shelter, under the cover of night, thanks to the Swedish embassy and the efforts of famed diplomat Raoul Wallenberg, who saved tens of thousands of Jews before mysteriously disappearing. The next day, Even’s grandfather was shot to death and his body was dumped in the Danube River.

Later in life, Even overcame multiple heart attacks, surgeries and even a brush with a cholera epidemic during a family visit to Spain. But he couldn’t escape the wrath of the global coronavirus pandemic that has been plaguing the globe.

On March 20, the 88-year-old became Israel’s first coronavirus fatality after he was infected by a visiting social worker at his Jerusalem assisted-living facility.

EDITOR’S NOTE: This is part of an ongoing series of stories remembering people who have died from coronavirus around the world.

Despite building a thriving family of his own in Israel, with four children, 18 grandchildren and a great-grandchild, Even died alone. His loved ones were forced to keep their distance from his infectious virus and had to say goodbye over the phone.

In keeping with the Jewish practice of burying the dead quickly, his funeral was carried out the following day, at the end of the Sabbath. His youngest child, representing the family, was one of only a handful of people who were allowed to attend — from a distance — as he was lowered to the ground by Jewish religious authorities wearing biohazard suits.

With Israel in virtual lockdown, his family was also deprived of a proper sitting of shiva, the traditional Jewish week of mourning in which families typically host open houses for relatives and acquaintances who congregate to pay their condolences.

“He was a strong man and he overcame the hardships of the Holocaust,” said his 57-year-old daughter Yael, expressing frustration at how he and others in the retirement home were exposed. “He lived a full life. It’s just a shame he had to go this way.”

He was born George Steiner, to a well-to-do Hungarian Jewish family from whom he inherited a life-long love of film, books and classical music. But their lives were turned upside down by Nazi rule. His father was sent to the Mauthausen concentration camp in 1941. When Germany occupied Hungary in 1944, Even, his mother and brother had to go into hiding for nearly a year, at times in bales of hay and in underground cellars.

After the war, at age 17, he immigrated to Israel, joined a kibbutz and then was drafted into the military as an aircraft technician. His parents, who also survived the war, fled Hungary after the Soviet invasion in 1956 and later joined him in Israel.

His wife Yona, a distant relative of Israeli President Reuven Rivlin, passed away in 2012. She was a career diplomat and he followed her to India, Japan, Germany, France and elsewhere while maintaining his own career as a customs officer.

Only much later in life did he start opening up about his wartime experiences, recording video testimony for the Yad Vashem Holocaust memorial at the behest of his children. He recalled the day Budapest was liberated by Russian troops who heaved loaves of bread from their trucks.

“Since then, I’m sympathetic to the Russians,” he said with a smirk.

His daughter Ofra, 50, said he was a man of fine tastes who took pride in his Hungarian cooking, but was also a hard worker and modest humanist who had sympathy for society’s weaker. His final years were spent socializing with fellow retirees and lounging in his private room reading World War II historical books and listening to his beloved classical music.

The eldest of his four children, 62-year-old Yaacov, described a “classy” gentleman who studied Latin and dreamed of becoming a doctor. He said his father was lucid until the end, sauntering around with a cane and telling his children to forgo a recent celebration of his birthday and instead plan on a bigger party when he turned 90.

“Who knows how long he had left? Another week? A year? Five years? Whatever it was, it feels like a waste to lose him now,” he said. “It still feels like he died before his time.”