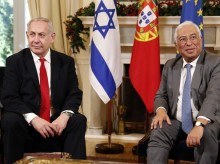 LISBON, Portugal (AP) — In a brief escape from his legal and political struggles in Israel, Prime Minister Benjamin Netanyahu enjoyed a leisurely excursion in Portugal, keeping a relatively light schedule and finding time to tour the capital and reminisce with reporters about his late father, who was an influential historian.

It could turn out to be a last respite as he returns to Israel to fight for his survival after a damning corruption indictment and two inconclusive elections that have left him clinging to power.

Netanyahu, accompanied by his wife Sara, tried his best to project business as usual, holding a lengthy meeting with U.S. Secretary of State Mike Pompeo that he called “critical to Israeli security.” He also met with Portuguese Prime Minister Antonio Costa to discuss joint projects and to thank him for taking a tough stance against anti-Semitism.

But with plenty of downtime on the two-day sojourn he also managed to find diversions from some of the drama in Israel, where he faces calls to resign and a brewing rebellion in his Likud party ahead of a likely third election within a year.

On a sunny, pleasant day, Netanyahu stopped by a lookout point on Thursday to take in a picturesque vista of Lisbon, greeting tourists along the way, and made a pilgrimage to a memorial for Jews who were massacred in the 16th century after the Spanish Inquisition. Before departing for home, he enjoyed a late-evening dinner with his wife at a fancy Lisbon restaurant.

Speaking to reporters earlier in the day, he refused to delve into his personal fortunes after Israel’s attorney general indicted him for fraud, breach of trust and accepting bribes in three separate cases. But he vowed to carry on and denied his precarious status was taking a toll or that foreign leaders were treating him any differently because of it.

“I’m a little different from what people think of me,” he said, in response to a question from The Associated Press. “I have struggles, but I’m different. It’s not because I am a robot. I am different in my ability to focus.”

Netanyahu appeared relaxed when reporters accompanying his trip stumbled upon him in central Lisbon as he was making an unannounced visit to the outdoor memorial for the nearly 2,000 Jews who were massacred on Apr. 19, 1506, in a pogrom that preceded the Portuguese Inquisition in which tens of thousands were killed or forced to flee.

Most of the victims had fled years earlier from the more infamous Spanish Inquisition, of which his father — historian Ben-Zion Netanyahu — was a renowned expert.

Wearing jeans and loafers, his hands stuffed into the pockets of an overcoat, Netanyahu asked about the memorial site outside the Sao Domingos church near Rossio Square before sharing his knowledge about the rich and tragic history of Portugal’s Jews. He said he’d been there before, 23 years earlier during his first term as prime minister, but never with his father, who passed away in 2012 at age 102.

“My father isn’t available right now,” he said with a shrug, when asked what Ben-Zion Netanyahu could have shared.

But he did disclose how he once accompanied his father to an award ceremony in Spain — where he was honored in an inquisition torture room, no less — and where the Israeli prime minister was referred to merely as “Netanyahu’s son.”

But even on foreign soil, there were reminders of his scandals back home, where he has lashed out angrily at detractors and accused police, prosecutors and a biased media of orchestrating a “coup” to remove him from office.

When an Israeli reporter jokingly asked which inquisition was worse, that against the Jews of Portugal or his own travails, he looked away and tried to change the subject. But his wife eagerly responded.

“There’s something to that. I don’t reject the question, I’m glad you understand that this is an inquisition for us,” Sara Netanyahu said. “We’ll find time to talk about this.”

The off-the-cuff comment drew swift condemnation in Israel from descendants of Spanish and Portuguese Jewish communities who said it showed contempt for Jewish suffering.

Barring a last-minute reversal, new elections will be triggered in the coming week, and the gaffe offered yet another headache as Netanyahu returned home to face the toughest challenge of his lengthy career.