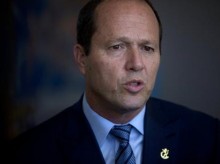 Jerusalem Mayor, Nir Barkat speaks during an interview with the Associated Press at his office in Jerusalem. (AP Photo/Sebastian Scheiner)

JERUSALEM (AP) — Fifty years after Israel conquered east Jerusalem, the city’s mayor says the upcoming anniversary is a time to celebrate, despite the deep rifts and occasional bursts of violence that disrupt daily life in the volatile city.

But like other prominent politicians of the hard-line Likud Party, Nir Barkat says Jerusalem must remain united under Israeli control, rejects Arab claims they are second-class residents — even though the vast majority are not even citizens — and insists the city’s diverse array of inhabitants are “all my children.”

“Jerusalem is the crown jewel. It will always stay the united, undivided capital of the Jewish people with respect to all religions,” the 57-year-old Barkat told The Associated Press this week at his office, which overlooks the Old City. “The prayer of all Jews, for thousands of years, is to return to the city of God, the holy city of Jerusalem.”

Barkat presides over perhaps the most complicated city in the world: deeply divided between Arab and Jew, religious and secular, rich and poor — and claimed as a capital by both Israelis and Palestinians.

On the other side of the Mideast conflict, the half-century mark of Israel’s victory in the 1967 six-day war is being perceived quite differently.

Jerusalem’s nearly 900,000 residents are split almost evenly three ways among secular and modern Orthodox Jewish residents, Muslim Palestinians and ultra-Orthodox Jews. All in all, it’s one of Israel’s poorest cities.

Recent figures gathered by the Jerusalem Institute for Policy Research think-tank found that 82 percent of the Arab population lives below the poverty line, compared to 28 percent of the Jewish population, among several statistics indicating vast gaps between the groups.

In another indicator of the wide disparities, Ir Amim, an Israeli advocacy group that promotes coexistence in the city, found in a 2014 report that the municipality allocated only an estimated 10 to 13 percent of its annual budget to east Jerusalem, even though Arab residents make up just over a third of the city’s population.

“I admit we have a lot of catch-up to do,” said Barkat, who became mayor in 2008 after a successful run as high-tech entrepreneur and venture capitalist. Since retiring from his business career, Barkat has worked for the city for a token salary of one shekel (27 cents) a year.

“I’m committed and I’m accountable to close gaps for all neighborhoods, Muslim, Christian, Jews — everyone,” he said.

Israel captured east Jerusalem, home to key Jewish, Muslim and Christian holy sites, from Jordan in the 1967 Mideast war and annexed the area in a move that has not been recognized internationally.

The fate of Jerusalem remains at the heart of the Israeli-Palestinian conflict. While past peace talks have discussed partition options, Israel’s current prime minister, Benjamin Netanyahu, says that’s out of the question.

Barkat, who recently joined Israel’s ruling Likud and considers himself a potential successor to Netanyahu, also flatly rejects the notion and claims a majority of the city’s Arab residents would prefer to stay under Israeli rule even if a Palestinian state were to be established.

To that end, he says he expects the Trump administration to follow through on its promise to move the American Embassy from Tel Aviv to Jerusalem — a scenario encouraged by Israel but bitterly opposed by the Palestinians.

“What I understand is that President (Donald) Trump and his people very, very clearly understand the future of our city as a united city,” he said. “I believe it will happen sooner rather than later.”

The Palestinians seek east Jerusalem as their capital, a position that has wide international support. In December, the U.N. Security Council passed a resolution declaring Israeli settlements in the West Bank and east Jerusalem to be illegal.

The Israeli government is responsible for peace talks with the Palestinians, and Jerusalem’s mayor has no official say in the city’s political future. But as chief executive he can affect the delicate balance between Arabs and Jews, especially in regards to daily life issues like building permits, construction and education. Critics say public services in Arab neighborhoods continue to lag far behind Jewish areas.

“What the municipality is providing for the Palestinians in the city for 50 years has been land confiscations, settlements, home demolitions and all kinds of depressing acts,” Husseini said. “Everything in east Jerusalem is bad, whether it’s the education or housing or health or level of living.”

Barkat rejects accusations that Jews receive preferential treatment over Arabs in housing permits. He said east Jerusalem poses particular zoning challenges since a majority of the land there is not properly registered and ownership is often difficult to establish. Regardless, he said that he has consistently increased annual investment in Arab neighborhoods of east Jerusalem and most of the city’s new schools have been built there.

“The prioritization system of where we invest is not symmetrical. We invest more where there are gaps,” he said. “The quality of life of the Arab residents of Jerusalem is far superior to anywhere else around us in the Middle East … and they know that very, very well.”

Barkat insists that, even with a wave of Palestinian stabbings and other attacks over the past year and a half, the city is far safer than other major cities around the world.

To keep it so, he said the massive Israeli separation barrier that cuts off parts of the city and leaves some Jerusalem neighborhoods stranded on the other side — essentially dividing it from the West Bank — is necessary.

The Palestinians say the barrier has divided their neighborhoods and allowed Israel to steal land that belongs to them.

“If I have to weigh between the two — life and quality of life — I choose life,” Barkat said. “In the foreseeable future, at least now, it looks like we are still going to need that fence.”