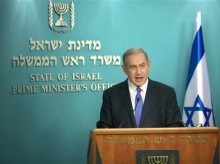 JERUSALEM (AP) — When Benjamin Netanyahu called early elections last year, he said his unwieldy coalition was untenable and that Israel needed a more stable government to carry out vital reforms.

But two months into his new term in office, Netanyahu finds himself depending on an even narrower majority, susceptible to the extortion of practically any lawmaker.

His political footing is so tenuous that he had to keep his defense minister from attending an international security conference in June because he couldn’t spare the minister’s vote. Another time, an ailing Cabinet minister was forced out of bed to save the government from the humiliation of losing a crucial late-night budget vote.

Unruly backbenchers in Netanyahu’s own Likud party have embarrassed him with their antics, and now he is facing growing criticism at home for failing to stop the international community’s nuclear deal with Iran.

Insiders say Netanyahu is in no danger of being toppled anytime soon, despite calls by opposition politicians that he step down over the Iran issue. However, it remains to be seen whether he will actually be able to get anything done in his fourth term in office.

“He can survive. The question is what quality of life he will have,” said Amit Segal, a political commentator for Channel 2 TV. “It’s hard to see him pushing forward with anything big.”

Some would say that is just how Netanyahu likes it. On course to become the longest serving prime minister in Israeli history, his legacy thus far is one of longevity rather than bold measures of war and peace that defined his predecessors. His lobbying against the Iran nuclear deal — which he insists will not keep Tehran from attaining an atomic weapon — took a big hit with last week’s U.S.-led agreement. The Iran issue has been a hallmark of his political career.

The fact that Netanyahu is still standing is an impressive feat itself given his situation in the days leading up to the March 17 election. Trailing in opinion polls and facing a potential uprising within the Likud, Netanyahu rebounded and surged to victory, in part through fiery election-day rhetoric that shunned Palestinian statehood and railed against Israel’s own Arab minority. By warning that Arabs were heading to the polls “in droves,” Netanyahu scared passive right-wing voters into voting.

But his victory came with a price. The votes Netanyahu earned in the final hours were largely sapped from his traditional nationalistic allies, leaving him with fewer coalition options.

To ensure the votes of his shaky majority, Netanyahu barred coalition members from traveling abroad without his approval. In the closest call yet, a Cabinet minister had to filibuster aimlessly in parliament while the coalition whip scrambled to gather supporters for a vote that could have technically toppled the government. Eventually, Netanyahu’s closest ally, Cabinet minister Yuval Steinitz, was awoken from his sick bed and rushed in wearing slippers at 1:30 a.m. to save the day.

Ironically, Netanyahu’s defeat over the Iran nuclear deal could work in his favor. He has stated hopes of expanding his coalition and has been urging opposition politicians to join him in a show of unity as the country confronts the Iranian threat. Netanyahu has argued that the deal, by easing sanctions, will allow the Iranians to funnel newfound cash to hostile militant groups and continue to develop its nuclear infrastructure in the coming years.

Netanyahu has already met with opposition leader Isaac Herzog following the nuclear deal, raising speculation that a unity government could be in the works. But Herzog threw cold water on that idea this week, rejecting a partnership with Netanyahu, despite their shared opposition to the Iran deal.

Regardless, Netanyahu says he is confident he can govern effectively — and his associates point to precedents in which previous narrow Israeli majority governments managed to thrive.

Political analyst Nehama Dueck said there is “strength in the weakness” of Netanyahu’s narrow coalition and that once he passes the state budget this summer, he should be able to breathe easy the next two years.

“They are all dependent on each other and know that if they don’t stick together, they are finished,” she said. “It’s a zero-sum game and everyone in the coalition has an interest to stay there so they won’t tug the rope too hard.”

Even so, no one is expecting major changes during Netanyahu’s new term in office.

The ultra-Orthodox religious parties have already scrapped a bill on Jewish conversions the previous government had promoted to help include more liberal streams of Judaism. They are also scaling back a law that would force their young men to serve in the military, which is compulsory for other Jews.

Hawkish partners have no interest in promoting a peace process with the Palestinians, though Netanyahu — much to their chagrin — has also quietly put the brakes on further settlement expansion, at least in the short term, to stave off international criticism. International pressure on Israel to restart peace efforts is expected to increase this fall, setting the stage at home for a delicate balancing act by Netanyahu.

The biggest move his new government has pushed for has been a deal to split revenues with gas developers that would inject billions of dollars into the economy. The opposition fiercely rejected the deal, saying it would create a gas monopoly controlled by business interests.

Because three of Netanyahu’s ministers have stated conflicts of interests in the matter due of their close ties to the gas companies, he was forced to shelve the vote.

In another setback, Israel’s attorney general ordered a criminal investigation Monday into excessive spending at the prime minister’s residences.

Netanyahu has also had to deal with scandals involving Likud backbenchers.

The biggest mess has involved Oren Hazan, the lowest ranking Likud lawmaker, who faced allegations in a TV investigative piece that he pimped prostitutes and provided crystal meth to Israeli tourists while running a Bulgarian casino before he entered politics.

Another Likud lawmaker, Yaron Mazuz, called for revoking the citizenship of Arab lawmakers during a parliamentary debate. “We are doing you a favor by letting you sit here,” he pointedly told the Arab lawmakers.

Netanyahu distanced himself from the comments but could do little more. Without Mazuz or Hazan, he would lose his parliamentary majority.

The incident sparked Arab lawmaker Ahmad Tibi to mock Netanyahu by saying that this is what he gets when Likud voters head to the polls “in droves.”