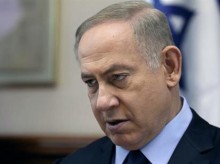 JERUSALEM (AP) — Israel’s Benjamin Netanyahu should be upbeat these days: The economy is growing, his opposition is weak and the incoming Trump administration seems friendly, even to the much-maligned Jewish settlements in the West Bank. Instead, the long-serving leader is mired in a series of eye-popping corruption investigations in a country that has already jailed a prime minister and president.

Police have interrogated Netanyahu several times “under caution” over questionable ties to top executives in media, international business and Hollywood, whipping up a sense that he might actually be driven from office. The latest scandal, involving secret negotiations with the publisher of a critical newspaper, is proving especially embarrassing.

The transcripts of Netanyahu’s taped negotiations with his supposed arch-nemesis, media mogul Arnon Mozes of the Yediot Ahronot newspaper group, have dominated the national agenda in recent weeks. Netanyahu allegedly promised to promote legislation that would weaken Yediot’s main competitor in exchange for more favorable coverage.

It follows previous allegations that Netanyahu improperly accepted lavish gifts from wealthy supporters — including Australian billionaire James Packer and Hollywood producer Arnon Milchan — and that his personal attorney, who is also a cousin, represented a German firm involved in a controversial $1.5 billion sale of submarines to Israel.

These follow previous repeated claims that his wife Sara misused state funds for personal use, compounding a public image of Israel’s first family as detached hedonists corrupted by years in power.

Netanyahu has repeatedly denied wrongdoing, portraying the accusations as a witch hunt against him and his family by a hostile media. Despite his impressive total of 11 years in office over two periods, Netanyahu has found himself at frequent loggerheads with much of the country’s establishment, including lately the security leadership.

“In recent days, there is an unprecedented, orchestrated media campaign to topple the Likud government that I lead. This propaganda campaign is aimed at pressuring the attorney general and others in the state prosecution to indict me,” he posted on Facebook.

Cabinet ministers must resign if indicted. But Israeli law is murkier when it comes to prime ministers, and Netanyahu has given no indication that he would step down in such a case.

The government of Netanyahu’s predecessor, Ehud Olmert, fell apart before he was indicted and ultimately imprisoned on corruption charges. Former President Moshe Katsav, who just completed a five-year sentence for rape and other sex crimes, also was forced to step down before he was indicted.

Regardless of whether Netanyahu’s actions prove criminal, opposition leader Isaac Herzog said they posed a “serious breach of trust between the government and its citizens.”

Most of the attention has focused on Netanyahu’s reported jockeying with Mozes in 2014 over how to rein in Israel Hayom — a free daily financed by Netanyahu’s billionaire friend Sheldon Adelson that largely serves as Netanyahu’s mouthpiece and has damaged Yediot financially.

The payoff, allegedly, would be Yediot flipping its editorial line in favor of Netanyahu. The talks ultimately led nowhere. This week, Netanyahu confirmed for the first time that he called an early election in 2015 to block legislation aimed at curtailing Israel Hayom’s distribution by forcing it to charge a newsstand fee.

Netanyahu has since appointed himself communications minister, making him responsible for media regulation, and ordered coalition partners not to float any media-related bills without his approval.

The leaks have also raised questions about the journalistic integrity of Yediot, which has gone into damage control mode even as some of its own columnists have called on Mozes to step down. Mozes has been questioned several times by police and hasn’t commented publicly.

It is not clear whether a crime was committed, and the other allegations may ultimately prove more serious.

The Netanyahus are said to have received more than $100,000 worth of cigars and liquor from Milchan. Packer has reportedly lavished Netanyahu’s college-aged son, Yair, with gifts that included extended stays at luxury hotels in Tel Aviv, New York and Aspen, Colorado, as well as the use of his private jet and dozens of tickets for concerts by Packer’s former fiancee, Mariah Carey.

On Tuesday night, Yair was reportedly being questioned by police.

Police are trying to determine whether these constitute bribes, since Packer is reportedly seeking Israeli residency status for tax purposes and Milchan reportedly asked Netanyahu to press the U.S. secretary of state in a visa matter. Israel’s Interior Ministry would not comment on Packer’s status, and a representative for Milchan did not respond to requests for comment.

None of Netanyahu’s coalition partners have come out against him. Cabinet Minister Tzachi Hanegbi, a close associate, said the Likud party was strongly behind its leader and no one was even considering making a run to replace him.

“It doesn’t seem to me, in a superficial observation, to be something corrupt or criminal,” he said.

But the saga has put a damper on Netanyahu’s joy over the arrival of Donald Trump, after eight years of testy ties with President Barack Obama. In a possible sign of trouble, Netanyahu last week suddenly canceled a trip to the World Economic Forum in Switzerland. Aides say there are no plans to attend Trump’s inauguration, despite reports that he was invited.

Trump looks to be a far more comfortable fit for Netanyahu and his nationalist coalition. He’s appointed a Jewish-American lawyer with close ties to the settlement movement as his ambassador to Israel and vowed to move the U.S. Embassy from Tel Aviv to Jerusalem — fulfilling a longtime Israeli wish.

Appearing to take a page out of the Trump playbook, Netanyahu has increasingly been attacking the press and taking to social media.

Opposition lawmaker Erel Margalit, who has been leading the calls to investigate Netanyahu, said his conduct over time makes him unfit to serve.

“Netanyahu is finished. It may take several more months but we need to start preparing for the next generation,” he said.