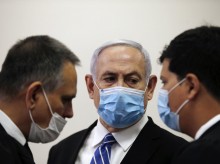 Israeli Prime Minister Benjamin Netanyahu, wearing a face mask looks at his lawyer inside the court room as his corruption trial opens at the Jerusalem District Court (Ronen Zvulun/ Pool Photo via AP)

JERUSALEM (AP) — To the sounds of his impassioned supporters chanting outside, a defiant Israeli Prime Minister Benjamin Netanyahu strode into a Jerusalem courtroom Sunday to face corruption charges in a long-awaited trial that has overshadowed three inconclusive elections and deeply divided the country.

As he entered the courthouse to become the country’s first sitting prime minister to go on trial, Netanyahu launched into a lengthy tirade against the nation’s justice system in which he accused police, prosecutors, judges and the media of a deep state-type conspiracy aimed to oust him against the will of the people.

“I stand before you with a straight back and head raised high,” he said, surrounded by leading Cabinet ministers of his Likud party. “The objective is to depose a strong, right-wing prime minister, and thus remove the nationalist camp from the leadership of the country for many years.”

The standoff, and Netanyahu’s own fiery rhetoric, looked to worsen the nation’s deep divisions just after Netanyahu swore in what he called a “unity” government with a former rival. Critics have said Netanyahu’s repeated attacks on the legal system risk irreversible damage to citizens’ faith in state institutions.

Outside the courthouse, hundreds of supporters rallied in his defense, packing a narrow street while waving Israeli flags and banners denouncing what they called a corrupt prosecution seeking to topple a leader of historic proportion. Others gathered at his official residence to demonstrate against what they called a “crime minister” and carried posters calling for his resignation. They faced off across police barricades with more of the prime minister’s backers.

Netanyahu faces charges of fraud, breach of trust and accepting bribes in a series of corruption cases stemming from ties to wealthy friends. He is accused of accepting lavish gifts and offering to grant favors to powerful media moguls in exchange for favorable coverage of him and his family. He denies the charges, which come after years of scandals swirling around the family.

Netanyahu entered the Jerusalem courtroom wearing a blue surgical mask, following public health restrictions due to the coronavirus pandemic. He refused to sit until TV cameras left the room, and remained in the front row throughout the session.

During the proceedings, the lawyers and judges also wore masks, with the three-judge panel sitting behind a glass divider. In a hint of what could lie ahead, his lawyer said the defense would need several months to study the hundreds of reams of evidence and to build its legal team.

Netanyahu did not speak during the one-hour session, rising just once to confirm he understood the charges. He will not be required to attend future hearings during a case that legal analysts expect to stretch over several years. The next hearing was scheduled for July 19.

Before the session, Netanyahu said police and prosecutors had conspired “to stitch up” a case against him, and said the evidence was “contaminated” and exaggerated. He called for the court proceedings to be broadcast live on TV to ensure “full transparency.”

“While the media continues to deal with nonsense, with these false, trumped up cases, I will continue to lead the state of Israel and deal with issues that really matter to you,” he said, including efforts to resuscitate the economy and prepare for a possible second wave of the coronavirus.

Netanyahu is not the first prime minister to go on trial. His predecessor, Ehud Olmert, went to prison for corruption but resigned long before the trial.

Netanyahu’s fitness for office was the key issue in the three deadlocked elections over the past year. After vowing never to sit with an indicted prime minister, Netanyahu’s challenger, Benny Gantz, agreed in March to form a power-sharing coalition with his rival, in part to prevent another election.

Gantz, who has made the defense of the legal system one his hallmarks, said he was sure Netanyahu would receive a fair trial.

“I repeat and emphasize that my colleagues and I have full faith in the justice system and law enforcement,” he tweeted.

Their new government was sworn in just last week for Netanyahu’s fourth consecutive term. Netanyahu held his first Cabinet meeting with the new government just hours before heading to court. Neither he nor any of his ministers addressed the looming trial.

Netanyahu and his allies have spent months lashing out at the law enforcement system, and a new round of attacks could test the new government.

Dozens of Netanyahu supporters outside the court in east Jerusalem wore masks and T-shirts depicting Netanyahu as a martyr and held posters lambasting the attorney general who indicted him.

“We won’t allow an image of Netanyahu being humiliated,” said Ran Carmi Buzaglo, one of the protesters. “The only reason that they forced him to come here, even though the law allows him to be absent, is to show an image of him in the defendant’s chair.”

Attorney General Avichai Mandelblit, who recently filed a police complaint following anonymous threats against him, vowed that the case will be handled like any other — “in a professional, business-like manner and within the courtroom halls.”

“We will continue to act without fear, even against the preposterous attempts to associate non-professional interests to law enforcement agencies,” he said.

Several of Netanyahu’s Likud Cabinet ministers, including the newly appointed internal security minister who overseas the police, came to the court to back him.

Opposition leader Yair Lapid said that Netanyahu’s “wild and inciteful outburst” at the courthouse was “final proof that a criminal defendant cannot continue to be prime minister.”

In a sign of the tensions, the prosecutor in the case left the courtroom accompanied by a state-issued bodyguard because of threats against her.

Under the coalition deal, Netanyahu will remain prime minister for the next 18 months, and “alternative prime minister” for the 18 months after. He will not be legally required to step down during what is expected to be a lengthy trial.