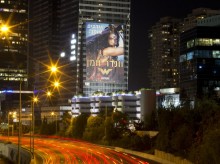 A billboard promoting the film Wonder Woman is shown near the main highway in Tel Aviv. (AP Photo/Ariel Schalit)

JERUSALEM (AP) — For a country that takes pride in even the smallest successes of its international celebrities, the debut of Wonder Woman has sparked an Israeli lovefest for homegrown hero Gal Gadot.

A huge billboard overlooking Tel Aviv’s main highway is tagged with a provincial “we love you” greeting, her Hebrew-accented appearances in the international media are reported upon daily and throngs of fans cheer wildly upon seeing her on the big screen. Even Lebanon’s ban of the film hasn’t dampened the mood in Israel, where Gadot’s superhero status has been embraced as a national treasure.

“It’s so cool that someone from here is succeeding and is famous overseas. Everyone in the theater was so excited,” said 20-year-old Ela Hofshi of Jerusalem, who watched the movie on opening night. “I think all the enthusiasm here is very supportive and encourages her to keep growing in the world and representing us.”

Eager for diversions from politics and conflict with the Palestinians, Israelis often rejoice when one of their own breaks through on the international stage, whether it’s Omri Casspi in the NBA, medal-winning Olympic athletes or big-name model Bar Refaeli. But Gadot’s ascendance to stardom has entered a whole new stratosphere as she has assumed the identity of Wonder Woman in a box-office smash that raked in more than $100 million in its first weekend in theaters.

The role has instantly transformed Gadot into arguably the world’s most famous Israeli and the country’s most high-profile ambassador. In contrast to Refaeli, whose aloof demeanor, refusal to perform her compulsory military service and a tax-dodging scandal have alienated many Israelis, Gadot has been widely embraced. In interviews, she often speaks in accented English of her military service, a rite of passage for most Israeli Jews, which has made her even more beloved at home.

“She bears the burden of being Israeli with grace and you can see that fame hasn’t changed her,” said Ariel Oseran, 27. “She represents the ‘good Israeli’ and does us a great service. When she talks about the army, it shows that serving in the military is not a bad thing. It’s something inspiring. It makes every one of our female soldiers seem like Wonder Woman.”

Gadot grew up in the Tel Aviv suburb of Rosh Haayin and somehow stumbled into stardom. She was chosen Miss Israel in 2004 at the age of 18 and represented the country in the Miss Universe pageant that year. She then put off her modeling career to enlist in the military, where she served two years as a combat fitness instructor. In 2007, she took a part in the Maxim photo shoot “Women of the Israeli Army.”

After a year of law school, a casting director invited her to audition for a James Bond movie. She didn’t get the part, but it led to her big Hollywood break in 2008 when she was cast in the “Fast & Furious” movie franchise as Gisele Yashar, an ex-Mossad agent.

In promoting the film, Gadot made the rounds of American talk and late night shows, charming the hosts with her down-to-earth personality. In an interview with ABC’s morning show, Gadot, who recently gave birth to her second child, joked that being pregnant as Wonder Woman was harder than being a soldier in the Israeli army.

Gadot, who performs her own stunts, has attracted fans with a public image that empowers women. For the film’s Los Angeles premiere, she showed up in $50 flats from Aldo rather than pricey heels. When asked, she responded “it’s more comfortable.”

Her mother, Irit Gadot, a former gym teacher, said that’s just who her daughter is.

“She has a certain personal charm, a certain simplicity,” she told Israel’s Channel 10 TV. “What she is is what you see.”

In Israel, she has avoided the types of scandals that often plague celebrities and has been showered with love. Theaters have erupted into cheers when she appears on screen, and some fans even broke into tears of joy on opening weekend.

Locals excitedly noted how Gadot’s Israeli accent was mimicked by her co-stars as the supposed dialect of Wonder Woman’s idyllic Amazonian island of Themyscira.

Haaretz film critic Uri Klein praised her performance, which he said was “likely to contribute to the pleasure for those who want to envelop the viewing experience in national Israeli pride.”

Her identity has also made her a target of anti-Israel boycott activists who attacked her on Twitter as a “Zionist” and pushed to have the film banned in Lebanon. Opponents noted Gadot had praised Israel’s military on Facebook during the 2014 Israel-Gaza war, sending prayers to soldiers “who are risking their lives protecting my country against the horrific acts conducted by Hamas.” The military, while defending its actions as a response to Hamas rocket fire, nonetheless draw heavy international criticism for the heavy Palestinian civilian death toll.

Michal Kleinberg argued in a column on the Nana10 website that Gadot represented far more than mere national pride.

“This is not one of ours who managed to squeeze into a fashion show or an important competition, it’s one of ours in the most leading role a woman can get in a Hollywood film,” she wrote. “Gadot is objectively (really!) perfectly cast for the role. It’s not that Hollywood has a shortage of beautiful, fit, athletic brunettes, but an Israeli actress has something a Hollywood one doesn’t. As much as it sounds cliche, she offers a sort of chutzpah, spice and relatability.”