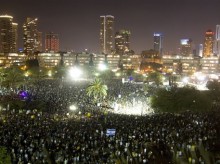 JERUSALEM (AP) – More than 400,000 Israelis poured into streets in cities across the country Saturday night in a show of strength behind a social protest movement that has rocked the country for two months.

The demonstrations in Tel Aviv, Jerusalem, Haifa and elsewhere against Israel’s high cost of living, its housing crisis and distorted distribution of wealth marked the climax of a summer-long grass-roots protest movement that has ballooned from a few tents in Tel Aviv to a nationwide phenomenon that has delivered Prime Minister Benjamin Netanyahu’s government its most serious domestic crisis.

Israeli media said the turnout in Tel Aviv was more than 300,000, and more than 100,000 demonstrated in other cities. Israel’s police did not give an estimate. Taken together, the numbers put the Saturday demonstrations among the largest in Israel’s history, and the other large ones were over political issues like Mideast peacemaking, not social ills.

The protest movement and its slogan of “the people demand social justice” have thrust Israel’s economic issues to the top of the country’s agenda and brought thousands into the streets each week.

“The new Israelis have a dream and it is very simple: we want to build our home in Israel,” Shmuli shouted. “We will not stop this protest until you, Mr. Prime Minister, give us real solutions. We are here to stay.”

Saturday marked the eighth week in a row protesters have taken to the streets.

“I’ve had enough of always working and never advancing. You have to work several jobs just to survive. All the burden is on the middle class,” said Sharon Riwkes, a 30-year-old clinical psychology resident in Tel Aviv.

Yehezkel Meroz, 75, said he has fought in five of Israel’s wars. “We need an ongoing protest against the system, against the way it has been conducted for so many years. It has been bringing Israel down except for a few individuals and a few parasites.”

The protests initially targeted soaring housing prices, but quickly evolved into a sweeping expression of rage against a wide array of economic issues, including the cost of food, gasoline and education. The movement has tapped into a wider sense of frustration over an eroding middle class and growing gaps between rich and poor.

In response to the summer-long protests, Netanyahu has appointed a committee to address the demands. The demonstrators _ a loose coalition of university students, social activists and disenchanted youngsters _ have rejected all the reforms offered by the government and have pledged to continue protesting.

The protests have included representatives of all segments of society, with the exception of ultra-Orthodox Jews. Many Israelis are concerned about the growing influence of an expanding community where most of its men study scripture and live on government handouts.

A brief flare-up between Israel and Palestinian militants in Gaza deflected attention from the protests, but the large turnout Saturday indicated the focus has returned.

Israel emerged from the global financial crisis relatively unscathed. The economy is enjoying rapid growth, and unemployment is at its lowest in decades at around 5 1/2 percent.

Even so, statistics show the ranks of the working poor have grown dramatically as wealth has increasingly become concentrated among a small group of tycoons.

The middle class has specifically been hit hard, with high taxes and salaries that have not kept pace with rising consumer prices.

In recent months, the country has experienced protests against the high price of gasoline and cottage cheese _ a staple of the Israeli diet _ and seen lengthy strikes by social workers and doctors over low pay and working conditions.

“There is a chance here to change the face of Israel,” parliamentary opposition leader Tzipi Livni told Israel’s Channel 2 TV.