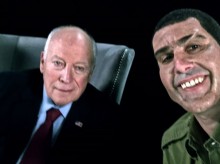 JERUSALEM (AP) — Sacha Baron Cohen is at it again. After tapping into his familiarity with Israel and his fluency in Hebrew to shape previous eccentric personas such as Borat and Bruno, the Jewish comedian has created his most stereotypical Israeli character yet — a grotesque, faux counterterrorism instructor in his new Showtime series “Who is America?”

Another of those pranked, disgraced Republican Senate candidate Roy Moore, accused Baron Cohen of preying on Israel’s friends in America and seeking to “embarrass, humiliate, and mock” the Jewish state. But in Israel — where Baron Cohen’s mother was born and where he spent much time in his youth — people seem to be in on the joke.

“The reaction has mostly been astonishment about the accuracy of the portrayal. He really got some of our traits down,” Einav Schiff, a TV critic for the Yediot Ahronot newspaper, said with a chuckle. “Everyone here knows an ‘Erran Morad’ but I haven’t recognized any outrage or embarrassment about the character. It’s mostly been ridicule for these Americans who have fallen for him.”

Typically donning black boots, fatigues and a military-type sweatshirt with inverse Hebrew writing on it, Baron Cohen’s Morad character sports a scar in his bushy unibrow and speaks in heavily-accented, broken English peppered with Hebrew expressions and in a choppy cadence typical of Israel’s gruff military types. Though he is said to be a colonel, he sometimes refers to himself as a general, major or captain, or alternately someone who served in the shadowy Mossad spy agency. With Cheney, the alleged retired operative showed up in a full olive-green military uniform and the insignia of a staff sergeant, none of which seemed to set off any alarm bells with the former U.S. secretary of defense.

It’s that type of lunacy that has mostly tickled Israelis. Besides exposing the prejudices of his targets, Baron Cohen’s humor has also uncovered the fetishized version of Israel that many of its supposed staunch supporters on the religious right believe exists. Nearly all were drawn to the interviews under the guise of a fake pro-Israel award for their support, when in fact all it did was expose their ignorance.

In practice, most Israelis are secular, gay-friendly and, even with the country’s mandatory military service, have little interest in firearms as recreation. Israeli gun laws are in fact quite stiff and most look at America’s obsession with weapons incredulously.

Nowhere is that more evident than in Morad’s “kinder-guardian” program segment, in which a string of gun-loving conservatives are fooled into believing Israel arms preschoolers to counter school shootings. More astoundingly, they go on to endorse such child-friendly products like “Puppy Pistol,” ″Gunny Rabbit” and the magical “Uzi-corn.”

“The intensive three-week Kinderguardian course introduces specially selected children from 12 to 4 years old to pistols, rifles, semi-automatics, and a rudimentary knowledge of mortars,” former republican congressman Joe Walsh says in one segment. “In less than a month — less than a month — a first-grader can become a first-grenade-er.”

In a subsequent CNN interview, Walsh admitted he was duped by a program that struck him as fishy. “I’m thinking to myself ‘well this is kind of crazy, but it is Israel and Israel is strong on defense,’” he explained.

Such reasoning has raised some concern in Israel that others may be naive enough to take Baron Cohen’s spoof literally.

“Yes, your satire was outrageously on point and Col. Erran Morad was spot on. Still, bad enough that Israel gets demonized for the things it actually does, you have to go and make horrifying fake stuff up?” wrote Allison Kaplan Sommer, an English-language columnist for the Haaretz daily. “Satire or not, I’m afraid the American public is going to be left with the impression, that we are, in fact, gun fans when the truth is our gun control is a million times stricter than in the U.S.”

Baron Cohen, 46, no doubt, knows his material. He is an observant Jew who belonged to a Zionist Jewish youth group while in high school in England. Upon graduation he spent a year working and studying on a kibbutz in northern Israel and has since returned for several visits. His fluency in Hebrew and grasp of Israeli politics and culture has found its way into his comedic acts before.

In Borat, the fake Kazakh that his wacky, misogynist and anti-Semitic character speaks is actually Hebrew — a twist that made the 2006 movie a fan-favorite in Israel. The film is filled with Hebrew vulgarities and in one scene Borat sings the lyrics of the legendary Hebrew folk song “Koom Bachur Atzel,” meaning “get up lazy boy.” Borat’s signature catch phrase — “Wa wa wee wa,” an expression for wow — derives from a skit on a popular Israeli comedy show.

Three years later, Baron Cohen portrayed Bruno — a flamboyant Austrian fashionista with a Nazi streak — and visited Israel, nearly sparking a riot in an ultra-Orthodox Jewish neighborhood in Jerusalem after strutting down the street in a sexed-up Hassidic outfit. He also comically referred to the chickpea dish “hummus” and the Islamic militant group “Hamas” interchangeably.

Showtime said Baron Cohen was not available for interviews about his new character.

With Moore, who has denied multiple allegations he pursued romantic or sexual relationships toward teenage girls while he was in his 30s, Morad taps into Israel’s image as a high-tech nation to introduce its newest gadget — a “pedophile detector” that naturally beeps every time he swipes the wand in front of Moore.

But even that pales in comparison to the humiliation heaped on Jason Spencer, the Georgia state representative. Egged on by Morad, Spencer proceeds to repeatedly shout a racial slur for black people, derogatorily imitates Asian tourists while slipping a selfie-stick between the legs of someone in traditional female Muslim garb and then caps it off by charging at Morad with bared buttocks to incite fear in his homophobic assailant.

Dor Hillel, a 26-year-old former Israeli soldier, said he found the gullibility so astounding it took him a while to figure out what he was watching.

“Apparently these people are so naive that they really think we are like that,” he said. “These Americans will believe anything.”