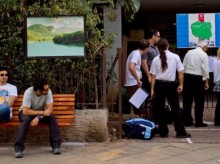 TEL AVIV, Israel (AP) — Despite their country’s turbulent history, Israelis enjoy a fairly secure existence: they have military might, a world-class high tech industry powering a strong economy, and America as a solid ally.

Yet in recent years, tens of thousands have requested and received the citizenship of European countries like Poland and Germany, which were killing fields for Jews just decades ago.

On the surface, the attraction is practical: An EU passport enables free travel and work in the entire union of 27 nations, giving access to high quality and subsidized higher education.

But just beneath lurks some fear for the future.

“Because of our situation, it’s good to have an escape path,” said Moti Alberstein, a 36-year-old doctoral student in biochemistry who just received Polish citizenship. “Life in this country entails so much uncertainty that there is this need to have some security. That’s why people are drawn to this.”

Israelis in general have more access to foreign passports than most, because a majority of them, or their parents, came here from somewhere else, and many retained the right to a passport from their countries of origin.

There is no stampede to actually leave a country that — for all its troubles — actually weathered the global financial crisis better than most.

Statistics about second passports are notoriously hard to nail down.

Countries do not always know whether their nationals have taken another citizenship. The American embassy estimates there are between 120,000-200,000 Americans in Israel.

Israel’s government claims it does not know how many of its immigrants retained their previous citizenship.

More than 1 million immigrants arrived from Russia, Ukraine, and other countries of the former Soviet Union since the collapse of communist rule there 20 years ago. The quasi-governmental Jewish Agency, which handles immigration, says a majority of them probably kept their foreign passports.

The new phenomenon is the accession to the EU, between 2004 and 2007, of several countries in eastern Europe where millions of Israelis have roots. The biggest numbers are attached to Poland, where some 3 million Jews lived before the Holocaust, and Romania, with close to a million.

That has made acquiring passports from those countries attractive enough to overcome the painful history.

One incentive, possibly as important as a safety net, is simply practical. It is easier to travel under a European passport than an Israeli one. Many more countries require Israelis to acquire visas, compared to Europeans.

It’s not uncommon on weekday mornings to see a line of eager Israelis stretching out from European embassies in Tel Aviv, seeking visas or passports.

“It’s definitely a phenomenon,” said lawyer Amichai Zilberberg, one of several who have specialized in recent years in the acquisition of Polish passports. “They want a foreign passport just to be on the safe side.”

Poland says it has issued 12,800 passports to Israelis from the Warsaw district alone since 2004, when that country joined the European Union, transforming a Polish passport in effect into a EU one. The Polish embassy says it is now issuing passports at a rate of some 2,000 a year.

The numbers are smaller in Romania, whose Interior Ministry would only say that 162 Israelis received citizenship since January 2009 — but even that has sufficed to stir up agitation on the country’s far right blogosphere, where ultranationalist Ion Coja, a former communist party secretary, called it “an invasion taking place in secret.”

The most complicated case may be that of Germany. It allows Jews who survived the Holocaust, to reclaim citizenship, and more than 25,000 Israelis have done this in the past decade.

If there is a trend toward seeking a safe haven, there would be several possible explanations.

Israel considers Iran to be an existential threat, charging that its nuclear program threatens Israel as its leaders talk about destruction of the Jewish state. Israel dismisses Iran’s denials.

Domestically, many Israelis are concerned about the growing influence of ultra-Orthodox Jews, especially since many of the men in that rapidly expanding community spend their lives studying scripture and surviving from government handouts. They fear the dampening affect they could have on the liberal aspects of Israeli society like nightlife, army service for women and low-key acceptance of gays.

Others are worried about unrest sweeping the Arab world and its potential to threaten Israel, and closer to home, many despair of ever making peace with the Palestinians, facing a long-term existence of attacks, disputes over settlements and international condemnation.

There is internal unrest as well. Tent cities have sprung up all over the country, and hundreds of thousands have demonstrated to protest housing shortages, high prices and poor government services.

Dan Ben-David, a Tel Aviv University professor and executive director of the Taub Center for Social Policy Studies, says Israel will struggle when so many people are not productive: “A third-world economy cannot maintain a first-world military,” he said. “And without a first-world military, we will not be able to survive in this part of the world.”

In the episode, a character suffers a nightmare in which he is the last person remaining in an Israel under nuclear attack — after everyone, including his wife and daughter, have fled with foreign passports.