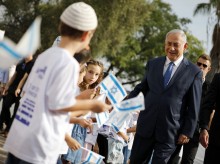 JERUSALEM (AP) — Israeli Prime Minister Benjamin Netanyahu kicked off the unofficial start of his new election campaign Sunday with a move straight out of his old playbook: attacking the media and pandering to his nationalist base.

After a sleepy summer, the longtime leader launched a blistering assault on an Israeli TV channel, accusing it of tarnishing him, slandering the country and fomenting anti-Semitism. He also used the start of the new school year to pledge he will annex and expand Jewish settlements in the Israeli-occupied West Bank.

With just over two weeks to go until the second election of 2019, Netanyahu is aiming to repeat the late-campaign magic that has propelled him to come-from-behind victories before. But with a hovering cloud of corruption charges that threaten to not only oust him from office but also put him on trial, Netanyahu appears to be unleashing his famous campaign messaging with far more devastating effects.

In a weekend outburst calling for a boycott of Israel’s leading television channel, Netanyahu named individual journalists, news executives and company shareholders as taking part in a “terror attack against democracy.” It was a dramatic escalation in the long-time war he’s been waging against the local media, which he routinely accuses of conspiring against him.

“Netanyahu is a master in ‘media victimhood.’ He’s always tried to influence the media market but this is a scathing attempt to challenge its very legitimacy,” said Tehilla Shwartz Altshuler, a media policy expert at the Israel Democracy Institute. “We can expect a short and cruel propaganda campaign ahead because he’s not just fighting for his political survival but for his personal survival.”

Netanyahu’s looming criminal indictment is directly linked to his obsession with media coverage. Israel’s attorney general has recommended Netanyahu be charged for offering advantageous legislation to a major newspaper in return for favorable coverage, as well as for promoting beneficial regulations for a telecom magnate in exchange for positive coverage on a news site. The attorney general is expected to issue a formal indictment after an October hearing with Netanyahu.

A Channel 12 report that quoted excerpts from the police investigation into the telecom case appears to have sparked Netanyahu’s ire toward Guy Peleg, the reporter who aired it, and executives at Channel 12′s parent company, the Keshet Media Group. Peleg has since been assigned a bodyguard after threats were made against him.

Netanyahu also called for Keshet to be boycotted for producing the new HBO docudrama “Our Boys,” about the chaotic events of June 2014 that followed the abduction of three Israeli teens in the West Bank. He denounced the series as anti-Semitic propaganda that was “distributed internationally and besmirches the good name of Israel” because it focuses on the death of a Palestinian teenager in a reprisal attack by Jewish extremists.

“I am not surprised that Channel 12 slanders Israel, as I am used to them slandering me on a daily basis,” he added in a Facebook video post.

Keshet had no response to Netanyahu’s comments. But Motti Rosenblum, head of the Israeli Media Council, a press freedom group, called the singling out of Peleg and the threats against him an extremely dangerous development.

“This is not criticism. This is to incite the mob against this journalist. For what? Because he is doing his job?” Rosenblum told Israel’s Army Radio.

Netanyahu has increasingly turned to tactics favored by his good friend President Donald Trump in recent years, taking aim at the media, prosecutors, judges and Israel’s Arab minority to shore up the support of his base.

Netanyahu’s chief election challenger, Benny Gantz, said that with the targeting of journalists, “violence turns from being a question of ‘if’ into a question of ‘when.’” He called on Netanyahu to desist “before it’s too late.”

Yossi Verter, the political commentator of the Haaretz daily, compared Netanyahu’s behavior to his actions before the 1995 assassination of Prime Minister Yitzhak Rabin. At the time, Netanyahu participated in fiery public protests against Rabin’s peace efforts with the Palestinians that critics said contributed to the charged atmosphere that led to the shooting of the then-Israeli leader by a Jewish ultranationalist.

Netanyahu has “gone back to his evil ways,” Verter wrote in a Sunday column.

“Netanyahu will not rest until blood is spilled — the blood of a journalist. There is no other interpretation for what he said, or growled to be exact, to his enthusiastic devotees,” he wrote.

Israel is holding the unprecedented do-over election after Netanyahu failed to secure a parliamentary majority in April’s elections.

With polls forecasting a similar outcome in the Sept. 17 election, Netanyahu has been increasingly seeking to bolster his base of religious and nationalistic voters.

He chose to open the new school year in the Jewish West Bank settlement of Elkana, where he reaffirmed his pledge to annex Jewish settlements and never allow them to be removed again.

“We are building new homes here,” he said to first grade students. “God willing, we will impose Israeli sovereignty in all the communities as part of the land of Israel and the state of Israel.”

Such a move would be a sharp departure from long-standing Israeli government policy, which has been not to annex settlements even while expanding them, and undermines prospects for a future Palestinian state.

The Palestinians claim all of the West Bank, which Israel captured in the 1967 Mideast war, as the heartland for a future independent state. The international community considers all settlements in the West Bank and east Jerusalem to be illegal, though the Trump administration has signaled that it might accept Israeli annexation of some West Bank land.

Netanyahu made a similar pledge to begin annexing part of the Israeli-occupied West Bank on the eve of April elections this year but did not act on it.

His potential nationalist coalition partners have been floating the prospect of legislating immunity for him from prosecution after the elections if he pursues their agenda.

President Reuven Rivlin, who serves a mostly ceremonial role, sought to calm the rhetoric in his own visit to a West Bank school.

“As the elections approach, when passions are raised and the discourse coarsens, I implore you not to believe the incitement and the personal attacks,” he said. “Do not listen to the voices that are eager to radicalize the discourse.”