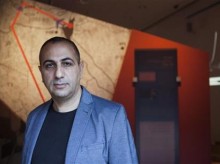 Avner Avraham, the curator of an exhibition showcasing the 1976 Israeli commando rescue raid that freed hostages from a hijacked plane at Entebbe, Uganda, poses for a photo at the Yitzhak Rabin Center in Tel Aviv, Israel. (AP Photo/Dan Balilty)

TEL AVIV, Israel (AP) — It was perhaps the most daring Israeli military exploit ever — a rescue raid in Africa that inspired Hollywood films and became etched in Israeli history.

Nearly four decades later, a first-of-its-kind exhibit showcases the story behind the July 1976 freeing of hostages from a hijacked plane at Entebbe, Uganda. The display includes a copy of the original order to launch the operation and the original combat vest worn by the lone casualty among the Israeli troops: Lt. Col. Yonatan Netanyahu, brother of Prime Minister Benjamin Netanyahu.

The exhibit, at the Yitzhak Rabin Center near Tel Aviv University, is the brainchild of curator Avner Avraham, a former Mossad officer who first researched the project while working for Israel’s spy agency. He only brought it into the public domain at the behest of Dalia Rabin-Pelossof, the daughter of the late Yitzhak Rabin, who as prime minister at the time ordered the risky operation.

“Books have been written and movies have been made (about it),” Avraham said. “Operation Entebbe represents the ability of the Jewish people in Israel to plan and carry out a raid that was beyond imagination.”

The crisis began on June 27, 1976, when four hijackers armed with guns and grenades boarded an Air France flight from Tel Aviv to Paris during a stopover in Athens and then took over the plane. After a brief refueling in Benghazi, Libya, the plane was flown to Entebbe, where they were welcomed by Ugandan dictator Idi Amin.

The hijackers, two Palestinians and two Germans, then separated about 100 Jewish and Israeli passengers from the rest and threatened to kill them if Israel did not free dozens of Palestinian prisoners. A feverish week of negotiations followed.

On July 4, Israel launched “Operation Thunderbolt” in which some 200 soldiers took part in an airborne raid on Entebbe airport that killed the hijackers, freed nearly all the hostages and was off the ground in less than an hour.

Three passengers were killed in crossfire during the rescue mission while a fourth, who had been evacuated to a local hospital, was later killed on orders from an enraged Amin.

Yonatan Netanyahu, the commander of the commando unit that led the raid, was shot dead as he was helping the Israeli hostages who had been held inside the airport’s old terminal back onto the plane.

His death made Yonatan an Israeli hero and thrust his family into the country’s national spotlight.

At the exhibit’s opening Thursday, Netanyahu was visibly emotional as he spoke of his brother, calling the exhibit “something special.”

“These things that are on display here … remind us of the heroism of Israel’s soldiers, our nation’s unity in trying days and the miracles we are able to create when we stand united against our enemies,” he said.

The Entebbe mission was later renamed “Operation Yonatan,” which was also the name of an Israeli film that dramatized the story and was nominated in 1978 for an Academy Award for Best Foreign Language Film. Two other films, featuring Anthony Hopkins, Burt Lancaster, Elizabeth Taylor, Richard Dreyfuss, Peter Finch and Charles Bronson, were also made.

But despite the fame it achieved, very little original documentation and artifacts have been made public, Avraham said. He scoured archives and grilled former captives and ex-Mossad colleagues to create a display that shows a simultaneous chronology of events in Entebbe and Israel.

Even with the passing of the years, more material still keeps surfacing.

A few days ago, the Israeli military archive released handwritten operations logs that included a note from then-Defense Minister Shimon Peres to Rabin in which he informs him of “the final twist” in the plan: Commandoes would disembark from the plane inside a black Mercedes with Ugandan flags to make it look like Amin’s vehicle.

The Tel Aviv exhibit includes a sketch of the airport terminal, copies of letters in which Rabin was first informed of the hijacking and one of the white bucket hats that Israeli troops wore during the raid.

It features original footage of Amin visiting the hostages and a letter he asked them to write urging the Israeli government to meet the hijackers’ demands. The letter never arrived, but the woman who wrote it still gets choked up when she recalls the experience.

Sara Guter Davidson, now 80, was heading to a family vacation in the United States with her husband and two sons when they were taken hostage. She kept a diary throughout the ordeal that she later turned into a book, describing their experience, including how she tried to keep the children busy by playing cards.

“I figured it was important that some kind of documentation remain of what happened to us because I was pretty sure that we were not going to make it,” she said, looking at her diary, which is part of the exhibit.

When they finally heard gunfire outside the terminal, she said she lay on top of her youngest son and prepared to die. Then a Hebrew-speaking man in fatigues turned up next to her and said: “Folks, we are here to take you home.”

She made a dash under gunfire toward the escape plane, where she fainted.

“People relate to this like it was a miracle,” she said.