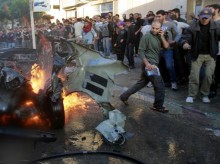 People look at a wreckage of the car in which was killed Ahmed Jabari. (AP Photo/Adel Hana)

GAZA CITY, Gaza Strip (AP) — Israel killed the commander of the Hamas military wing in one of some 20 airstrikes on the Gaza Strip Wednesday, the worst barrage on the Palestinian territory in four years in retaliation for renewed rocket fire on southern Israel. Gaza’s health minister said 10 people were killed, two of them young children.

The Israeli military said it was the beginning of a major offensive and warned that it could escalate with a ground attack.

‘‘All options are on the table. If necessary, the (Israeli military) is ready to initiate a ground operation in Gaza,’’ it said.

The killing of Ahmad Jabari marked a dramatic resumption of Israel’s policy of assassinating Palestinian militant leaders. He was the most senior Hamas official to be killed since the last war in Gaza ended in early 2009. He has long topped Israel’s most-wanted list, blamed for a string of deadly attacks, including the kidnapping of Israeli soldier Gilad Schalit in 2006.

The offensive followed a weekend exchange of rocket fire from Gaza on southern Israel and Israeli airstrikes. Seven Palestinians were killed and several Israelis were wounded.

The military said its aircraft targeted more than 20 facilities that served as storage or launching sites for rockets. Among the weapons destroyed were rockets that could hit as far as 40 kilometers (25 miles) into Israel.

Plumes of black smoke wafted into Gaza City’s skies following at least five airstrikes there. Sirens blared as people ran in panic in the streets and militants fired angrily into the air. Hamas police cordoned off the area around a hospital where at least one body from the strike was taken. It was draped in a white sheet, with a burnt leg poking out.

Gaza Health Minister Dr. Mufeed Mkhallalati said a total of 10 people were killed, including Jabari, and 45 wounded, 10 of them in critical condition. Among the dead were three civilians, including an 11-month-old and a 6-year-old.

Palestinians called for harsh retaliation. Hamas, which rules Gaza, announced a state of emergency in the territory. It evacuated all its security buildings.

Outside the hospital where Jabari’s body was taken, Hamas official Khalil al-Haya eulogized the commander and threatened Israel.

‘‘The battle between us and the occupation is open and it will end only with the liberation of Palestine and Jerusalem,’’ he said.

Thousands of angry Gazans chanted ‘‘Retaliation’’ and ‘‘We want you to hit Tel Aviv tonight.’’

Witnesses said Jabari was traveling in a vehicle in Gaza City when the car exploded. Crowds of people and security personnel rushed to the scene of the strike, trying to put out the fire that had engulfed the car and left it a charred shell. The Israeli military released a grainy, black-and-white video of the airstrike. It shows a sedan moving slowly along a road before exploding in a powerful blast that sent a large piece of the car flying into the air.

Fearing a long war in Gaza, Palestinians rushed to buy fuel, bread and other food supplies.

‘‘We are working under fire to protect our people and to back the resistance,’’ said Islam Shahwan, a Hamas interior ministry spokesman. ‘‘We have a full emergency plan that we are adopting now.’’

The chief military spokesman, Brig. Gen. Yoav Mordechai, said ‘‘at this stage’’ there are no plans for a ground offensive. ‘‘We’re focusing on an air operation,’’ he said.

The military said the assassination was just the beginning of an operation codenamed ‘‘Pillar of Defense.’’

‘‘After a couple of days on ongoing rocket attacks toward Israeli civilians, the (Israeli military) chief of staff has authorized to open an operation against terror targets in the Gaza Strip,’’ military spokeswoman Lt. Col. Avital Leibovitch said.

She said Jabari had ‘‘a lot of blood of his hands’’ and that the military chief ‘‘authorized different targets’’ as well.

Advocates say targeted killings are an effective deterrent without the complications associated with a ground operation, chiefly civilian and Israeli troop casualties. Proponents argue they also prevent future attacks by removing their masterminds.

Critics say the killings invite retaliation by militants and encourage them to try to assassinate Israeli leaders. They complain that the strikes amount to extrajudicial killings.

‘‘Assassinating leaders is never the solution. In place of the leaders killed, other will grow, and we will only get another cycle of fire and blood,’’ he said.

During a wave of suicide bombings against Israel a decade ago, the country employed the tactic to eliminate the upper echelon of Hamas leadership. During that period, Israeli aircraft assassinated the previous commander of Hamas’ military wing, Salah Shehadeh, the movement’s founder and spiritual leader, Sheik Ahmed Yassin, his successor, Abdel Aziz Rantisi, and dozens of other Hamas military commanders.

That set off a wave of criticism from rights groups and foreign governments, particularly the strike that killed Shehadeh — a one-ton bomb that killed 14 other people, most of them children.

‘‘We need to continue this policy, to find them in every place,’’ he told Israel’s Army Radio. ‘‘Israel needs to determine the agenda, not Jabari.’’

Mofaz warned that Israelis should expect an escalation of violence in the coming days following the assassination.

Jabari was known in Israel as the man who accompanied Schalit when the high-profile prisoner swap took place last October. Schalit, who was captured in a cross-border raid from Gaza that killed two other soldiers, was swapped for more than 1,000 Palestinian prisoners, including more than 300 convicted killers.

Jabari, nicknamed Abu Mohammed, was born in 1960 in the eastern Gaza neighborhood of Shejaiya. In 2006, he became the acting commander of the military wing of Hamas after his predecessor, Muhammad Deif, was seriously wounded in an Israeli attack.

Jabari began as a member of Palestinian President Mahmoud Abbas’ Fatah party, but switched his allegiance to Hamas after serving 13 years in an Israeli prison.

He survived four previous attempts by Israel to kill him. In one attempt in 2004 his eldest son, his brother and three other relatives were killed.

He was said to have led the bloody 2007 takeover of Gaza from Fatah forces, developing Hamas’s military arsenal and its networks in Iran, Sudan and Lebanon and for his planning of the Schalit kidnapping. Hamas has ruled Gaza with an iron grip since then, and repeated attempts to reconcile with Fatah have failed.

The assassination threatened to further damage Israel’s relations with Egypt, which is governed by Hamas’ ideological counterpart, the Muslim Brotherhood.

On its official Facebook page, the Freedom and Justice Party, the Muslim Brotherhood’s political arm, called the assassination a ‘‘crime that requires a quick Arab and international response to stem these massacres against the besieged Palestinian people in the Gaza Strip.’’

It accused Israel of trying to ‘‘drag the region toward instability.’’

Israel and Egypt signed a peace accord in 1979. Relations, never warm, have deteriorated since longtime Egyptian President Hosni Mubarak was ousted in a popular uprising last year.