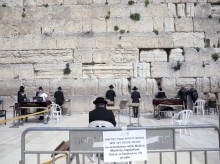 JERUSALEM (AP) — Israel swore in its newly elected parliament on Monday under stringent restrictions because of the coronavirus outbreak, in a surreal ceremony reflecting the country’s unprecedented dual crisis in politics and public health.

Instead of the typical festive gathering of parliament’s 120, the new lawmakers took the oath of office in groups of three over 40 staggered rounds, in keeping with a Health Ministry ban on gatherings of more than 10 people. Israeli President Reuven Rivlin presided over the unusual event after the Israeli Knesset, or Parliament, was thoroughly sprayed with disinfectant.

Rivlin called for unity and compromise from the two leaders, saying the Israeli people “are in need of rest, we are in need of healing” after three parliamentary elections in under a year.

After Netanyahu and Gantz were sworn in, they were ushered out of the hall and the lawmakers were brought in three-by-three for brief swearing-in ceremonies.

The event, coming two weeks after national elections, will give the country a new legislature. But Israel still seems a long way from establishing a stable government.

Rivlin on Monday formally designated Gantz, leader of the Blue and White party, the task of forming a coalition after the retired military chief secured a slim majority of recommendations from incoming lawmakers.

Gantz promised to “do whatever it takes to form within as few days as possible a national, patriotic and broad government.”

But beyond a joint desire to oust the longtime prime minister, Gantz’s bloc of supporters has little in common. It is deeply divided along ideological lines and appears unlikely to band together for an alternative government that could replace Netanyahu, who faces serious legal troubles as he prepares to go on trial to face corruption charges.

Gantz’s Blue and White party submitted three bills to parliament on Monday that seek to oust Netanyahu from office. The first proposes a two-term limit to the premiership, the second bars prime ministers from serving while under indictment, and the third would prohibit giving the task of forming a government to an indicted lawmaker. A similar bill has been submitted by the opposition Yisrael Beytenu party.

During the transition period, his Blue and White party is expected to name one of its members as speaker of the parliament. But it remains unclear whether these bills will garner enough support to pass.

Netanyahu’s Likud emerged as the largest party in the March 2 election, Israel’s third in under a year. But along with his smaller religious and nationalist allies, he only has the support of 58 lawmakers — leaving his right-wing bloc three seats short of the required majority in Parliament.

With the country’s continued deadlock likely, and the prospect of yet another election seeming preposterous under the circumstances, Rivlin summoned both Netanyahu and Gantz late Sunday to an emergency meeting in hopes of cajoling them into a unity government. Gatnz receiving the “mandate” from Rivlin could strengthen his position in unity talks with Netanyahu.

Both men have expressed openness to the concept amid a national sense of emergency surrounding the spread of the new virus. But there is deep distrust between them after a nasty campaign. and they differ on who should lead such a government.

Netanyahu has been shepherding the country as it confronts a growing coronavirus threat, with some 250 people diagnosed and the number quickly rising. He’s imposed a series of sweeping travel and quarantine measures that have thus far helped prevent any virus-related fatalities, but experts still predict many more difficult weeks ahead and the prospect of a more far-reaching clampdown on daily life.

The virus has spread to more than 100 countries, infected more than 170,000 people worldwide and killed more than 6,500. For most people, the new coronavirus causes only mild or moderate symptoms, such as fever and cough. For some, especially older adults and people with existing health problems, it can cause more severe illness, including pneumonia. The vast majority of people recover from the new virus.

Netanyahu’s aggressive response, which was showcased in near-daily prime-time television addresses, seems to have boosted his public standing. His criminal trial has been postponed because of the restrictions on public gatherings, and the pandemic eruption has offered him an opportunity to flaunt his leadership skills and project a narrative that his legal woes pale in comparison.

A poll published Sunday night on Channel 12 news showed 62% of the public saying he was handling the crisis in a responsible manner, with 70% supporting his decision-making. The Direct Polls Ltd. survey polled 821 adult Israelis and had a margin of error of 4.1 percentage points.

Still, some of his measures have drawn stiff criticism from civil liberties groups, in particular his authorization of the Shin Bet internal security agency to use mobile-phone tracking technology to monitor the movements of coronavirus patients.

Opponents also bemoaned how his hand-picked interim justice minister swiftly declared a state of emergency in the court system, forcing the postponement of Netanyahu’s trial for more than two months.

Netanyahu faces charges of fraud, breach of trust and accepting bribes in connection to a series of scandals. He is accused of receiving expensive gifts from wealthy friends and offering to exchange favors with powerful media moguls. The long-ruling Israeli leader denies any wrongdoing and says he is the victim of a media-orchestrated witch hunt.