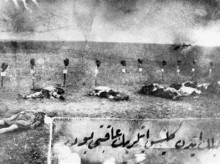 This 1915 file photo, shows Armenian victims of the massacres in Turkey. (AP Photo)

JERUSALEM (AP) — The Nazi genocide of European Jews is widely commemorated in Israel and etched deeply into the psyche of a country founded in the Holocaust’s aftermath. But when it comes to the 1915 Armenian genocide, Israel has largely stayed silent.

Fearing repercussions from its former ally Turkey and wary of breaking ranks with American policy, Israel has refrained from calling the mass killing of Armenians by Ottoman Turks during World War I a genocide. Now, days before Armenia holds centenary commemorations, and with ties to Turkey frayed, there are growing calls from within Israel to finally do so.

In a first of its kind gesture, Israel is dispatching a pair of lawmakers to the ceremony in Yerevan on Friday. However, the low-level delegation is under strict instructions to refer to the killings as a “national tragedy” rather than “genocide.” One of those backbenchers, Nachman Shai of the centrist Zionist Union party, said it was time for Israel to acknowledge that genocide took place.

“In foreign policy, there are interests and there are values,” he told The Associated Press. “In this case I think values should trump interests. As Jews, we must recognize it.”

Historians estimate that up to 1.5 million Armenians were killed by Ottoman Turks around the time of World War I, an event widely viewed by scholars as the first genocide of the 20th century. Turkey denies that the deaths constituted genocide, saying the toll has been inflated and that those killed were victims of civil war and unrest.

As Armenians have campaigned for greater genocide recognition, Turkey has fiercely lobbied to prevent countries from doing so. For years, Israel did not officially broach the subject for fear of angering Turkey — one of its few allies in a hostile region.

But relations have soured during the rule of Turkey’s Islamist leader Recep Tayyip Erdogan over the past decade, leading Israel to reconsider its position. In 2011, Israeli lawmakers began a formal debate on the floor of parliament, with proponents saying Israel had a moral obligation to recognize genocides elsewhere given the history of the Nazi Holocaust. Two years later, parliament held another special session on the matter.

As the 100th anniversary approaches, the issue has taken on greater relevance. Pope Francis last week referred to the killings as the “first genocide of the 20th century,” sparking an outraged Turkey to recall its ambassador to the Vatican. The European Parliament adopted a nonbinding resolution to commemorate “the centenary of the Armenian genocide,” while Germany’s Parliament is set to use the term in a resolution on Friday.

Barack Obama, who as a presidential candidate promised to recognize the genocide, has refused to do so as president and is now under pressure to follow up on his pledge.

Archbishop Aris Shirvanian, a top official at the Jerusalem Armenian Patriarchate, said he was pleased Israel was sending a delegation to the ceremony but said it should go further.

“We are extremely sensitive and sympathetic to the terrible tragedy of the Armenians during the First World War,” he said. “One thing is the historic debate over how to label the tragedy and the other is the recognition that something terrible happened to the Armenian people, and that is much more important.”

Only two dozen, mostly Western, countries have officially recognized the genocide, including Canada, France, Italy and Argentina. Isaac Lubelsky, who teaches genocide studies at the Open University in Tel Aviv, said the United States and Israel were both “glaringly absent” from the list.

“The time has come to listen to the feelings and the conscience of the countries of the enlightened world and to recognize, without fear, the Armenian genocide,” he wrote in the Maariv daily.

A group of prominent Israeli academics, artists and former generals and politicians recently signed a petition calling on Israel to follow the pope’s lead and recognize the genocide.

“As the children of a people that has known a Holocaust and which fights against its denial, it behooves us to show special sensitivity to the disaster of another people,” the petition reads.

Yossi Sarid, a former leader of the dovish Meretz party and an outspoken critic of what he called Israel’s “cynical” stance, was even more blunt. As education minister in 2000, he gave a landmark speech to an Armenian church in Jerusalem recognizing their genocide, and as a result became persona non grata in Turkey.

But he says the United States, not Turkey, is standing in the way of Israeli recognition.

“Ultimately, we are a satellite state of the United States. When America finally decides to recognize it I suppose we will as well,” he told the AP.

But he said Israel should have led the way. The German Nazis and their collaborators murdered 6 million Jews during World War II, wiping out a third of world Jewry, and Israel has been at the forefront of international efforts to combat its denial.

“We are after all the ‘experts’ on genocide, so it is doubly important,” he said. “But in a way, we too are Holocaust deniers, so long as it isn’t our Holocaust.”