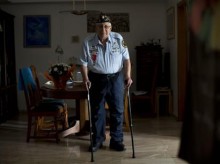 JERUSALEM (AP) — As a proud patriot, Brooklyn-born Dan Nadel enlisted in the U.S. army right after the Japanese attack on Pearl Harbor. But there was another force driving him to battle — his Jewish faith.

“What Hitler was doing to the Jews, I knew he had to be killed and stopped,” the 95-year-old decorated veteran said from his home in Jerusalem. “That was my motivation.”

Nadel is among a dwindling population of Jewish war veterans who battled the Nazis — a group that until recently received little recognition in the Jewish state. Seventy years after the war ended, Israel is finally paying homage to the 1.5 million Jewish soldiers with a planned museum and research center.

Nadel became an officer and landed on Normandy shortly after D-Day. He went on to earn five battle stars while leading combat engineer troops in the Battle of the Bulge and the liberation of France. Eventually, he helped free his fellow Jews from Nazi concentration camps.

“You can’t imagine what it was like. The stench, people walking around just like skeletons, just bones and skin, that’s all,” he recalled. “It was terrible. Our general, Patton, when he went into the camps, he puked.”

Stories of the death camps are well-known in Nadel’s adopted home of Israel, but the odysseys of Jewish soldiers are less well chronicled. In Israel, World War II history is predominantly focused on the Holocaust and its 6 million Jewish victims. When Jewish heroism from that era is invoked, it typically refers to the rebels who resisted the Nazis in the ghettos or volunteers from the Holy Land who later helped establish Israel.

Earlier this month, both Prime Minister Benjamin Netanyahu and President Reuven Rivlin attended Israel’s official ceremony marking 70 years since Victory Day in Europe and acknowledged that the contributions of Jewish veterans have often been overlooked. They said financing would be found to complete the construction of the planned museum, which has been bogged down in a bureaucratic stalemate for more than a decade.

“We stand here as representatives of a people who gave their best sons in the battleground. While their brothers were being led to destruction, the Jewish warriors stood on the front lines,” said Rivlin. “Do our children know this? Do our grandchildren know that the Jewish people fought in the killing fields of Europe?”

More than 250,000 Jewish soldiers died in battle. Many were among the first to liberate the Nazi death camps, often comforting the dazed, emaciated prisoners in Yiddish.

Zvi Kan-Tor, a retired Israeli general, has taken on the mission of preserving the memory of these Jewish war veterans, leading the efforts to establish the Museum of the Jewish Soldier in World War II in the central Israeli town of Latrun.

A structure is already standing and some exhibitions are ready to be displayed, but the funding isn’t there yet. His hope is that together with private donations and government assistance it can be completed while some of the approximately 5,000 veterans remaining in Israel are still alive.

“World War II in our collective memory has been sealed by a single word: Holocaust,” said Kan-Tor. “We’ve heard about the victimhood — let’s tell this side too… This is the missing piece. Maybe we can finally tell the full story of the Jewish people.”

That story includes British signalman Norman Cohen, who landed on the beaches of Normandy on D-Day with the British 2nd Army. As a radio operator under the command of Gen. Miles Dempsey, he received the German transmission on their surrender and then stumbled upon the scene of Nazi leader Heinrich Himmler’s suicide in Luneburg.

“I did my job. You are in a place in a certain time — it doesn’t make you a hero. You are just there,” said Cohen, 91, who had withstood the blitz in his British hometown of Coventry before enlisting — and then dodging some close calls in combat.

But in Israel he is often mistaken for a survivor, not a warrior. “It is very difficult to convey to the next generation what I feel,” he said.

The Jewish fighters who returned to their home countries were not part of the early Zionist narrative, said Tamar Ketko, the curator of the new museum. That honor belonged to the partisans, the Zionist volunteers and the plucky resistance in the Warsaw Ghetto uprising, who better fit the country’s pioneering fighting spirit.

Only after the mass immigration of Soviet Jews in the 1990s did the term “veteran” make its way into Hebrew vernacular. Every year, they would strut out on Victory Day with their medals pinned on old uniforms. One such veteran, out of more than 500,000 Soviet Jews who took part in the fighting, approached Kan-Tor and urged him to take on the project of a museum.

The Russian-centric celebrations, however, were not inclusive toward other nationalities, including Americans. The some 550,000 Jewish-American troops made up the largest Jewish fighting force in World War II.

“You wouldn’t know that Americans were in the war,” bemoaned Nadel.

He was a commander of the only post in Israel for American Jewish war veterans and his testimony is slated to be featured prominently in the future museum. The post used to have 200 members and now it is down to just 90. “We are a dying breed,” he said.

Nadel said that of the 55 men who hit the Normandy beach under his command only 12 survived. He credits his own miraculous survival to a Jewish amulet attached to his dog tags.

He said he and other soldiers had no idea about the concentration camps and the scope of the genocide. “We didn’t know anything about it until we actually came across it and saw it with our own eyes,” he said.

After the war, his wife wanted to immigrate to the Palestine Mandate, where other Jewish World War II vets helped build up Zionist forces ahead of Israel’s war of independence in 1948. But Nadel said he’d seen enough fighting and opted to stay in the U.S., immigrating to Israel only in 1977.

There he became recognizable in his Jerusalem neighborhood for wearing a baseball cap that read “World War II veteran.”

“Every American who sees me says ‘Way to go.’ They know what we did. But the story of what we did has never really been told in Israel,” he said. “And in a few years there won’t be any of us left.”