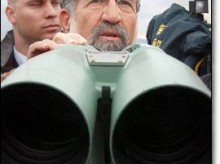 Labor Party leader Amram Mitzna, about to peer through binoculars near the Palestinian city of Jenin last month, supports "separation" from the Palestinians and unilateral evacuation of certain Jewish settlements. (Reuters Photo)

TEL AVIV — There seems to be a consensus about Labor Party’s new leader, Amram Mitzna: Everyone likes him, many respect his opinions — and most believe he has little chance of becoming Israel’s next prime minister, despite the growing bribery scandal surrounding Prime Minister Ariel Sharon.

While the scandal has hurt the prime minister’s Likud Party, opinion polls show that support is shifting to other smaller centrist and right-wing parties rather than to the left-leaning Labor Party.

On Thursday, an angry Sharon charged that Labor was behind the allegations of corruption.

“I never imagined that the behavior of the Labor Party would be so irresponsible,” he said at a news conference. “They tried to turn all of us into the mafia, into organized crime, and all for the sake of politics.”

The scandal erupted Tuesday when the Haaretz newspaper printed a leaked Justice Ministry document that showed police were investigating Sharon and his sons in connection with a $1.5 million loan they received a year ago from a South Africa-based businessman to cover payback of illegal campaign funds from a previous election.

But Sharon’s troubles have yet to help Mitzna, the mayor of Haifa, Israel’s third-largest city.

“Mitzna’s primary problem is that he is perceived as too much of a dove,” said Professor Efraim Inbar, head of the BESA center at Bar Ilan University. “You don’t win elections in Israel with a dovish platform.”

Inbar noted that the two Labor Party leaders who won outright victories over Likud were both military men who were perceived as hawks, Yitzhak Rabin and Ehud Barak.

Mitzna doesn’t lack the pedigree. He joined the prestigious Military Academy at age 14, enlisted and rose through the ranks until retiring in 1993 as a major general.

He was wounded twice in four wars, losing a kneecap in 1973, and received numerous citations for heroism in Israel’s wars.

Mitzna took leave during the Lebanon war in protest over the policies of then Defense Minister Sharon. He later commanded the Israeli forces in the West Bank during the initial Palestinian uprising in the late 1980’s and early ’90’s, dealing toughly with both Palestinian militants and Israeli settlers, which drew the ire of right-wing Israeli politicians.

Unlike many former generals with political ambitions, Mitzna bypassed national politics upon his discharge and instead decided to run for mayor of Haifa, where he gained acclaim for running an efficient city and for keeping the peace in its mixed Jewish-Arab community. Under his leadership, the riots of October 2000 passed with unparalleled quiet in Haifa.

As leader of the Labor Party, Mitzna has proposed a radical shift in Israel’s policy toward the Palestinians.

He has promised to evacuate all Gaza settlements without preconditions within a year in office and to immediately resume talks with the Palestinians.

He has not ruled out talking to Palestinian leader Yasser Arafat, who has been dismissed as a peace partner by both Sharon and the United States.

And if negotiations fail after a year in power, Mitzna says he will support unilateral separation, withdrawing Israeli troops from large chunks of the West Bank and establishing a “security border.”

Analysts say the far-reaching concessions are unpalatable to an Israeli public that has shifted to the right during the current Palestinian uprising.

“The public doesn’t stand behind his positions,” said Inbar. “And even those things it is ready to negotiate on, like evacuating settlements and dividing the land of Israel, the people would prefer that Sharon do the bargaining.”

In fact, the most Mitzna can hope for, according to Inbar, is that Labor will do well enough in this election to be invited into yet another unity government headed by Sharon, a prospect Mitzna has already rejected.

Nevertheless, the Haifa mayor wins points for his unassuming personality and deeply held views, even from those who may not vote for the Labor leader.

Born and raised on a kibbutz, Mitzna eschews suits and is recognized mainly by his trademark graying beard, which he has sported since the Six Day War in 1967.

He drives his own car, jogs alone on the beach and, until recently, met people without aides or bodyguards. The public seems to admire his straightforward unpretentious no-nonsense character.

“I don’t know that much about him,” said Etti Peretz Greenberg, a Tel Aviv resident. “But he seems like a good man; he leaves the impression of being a decent and honest person.”

Sharon Tzarfati, Greenberg’s companion at a roadside cafe, noted that Mitzna wasn’t very charismatic. “But I like that about him,” she said. “He doesn’t throw around promises. He says what he really thinks.”

Nevertheless, neither could say whether they would vote for the Labor candidate at the Jan. 28 election.

Others have a problem embracing a candidate with limited political experience in a nation battered by suicide bombings and fearful of a becoming embroiled in a new war involving Iraq.

“We need someone with experience,” said Tel Aviv lawyer Tedhar Tzur. “We don’t know enough about Mitzna. I know he did a good job in Haifa, but being prime minister is a lot different than being mayor.”

But Tzur also acknowledged Mitzna’s strengths. “I think he has good intentions, but what happened to [Ehud] Barak could happen to him too,” referring to the last Labor Party prime minister, whose long and eventually fruitless negotiations with the Palestinians preceded the outbreak of violence.

“He’s not a political animal,” said Kadmon, a columnist with the Israeli daily Yedioth Ahronoth. “It’s hard to survive politically with a personality like this.”