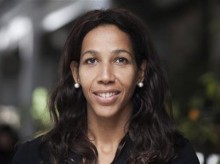 JERUSALEM (AP) — When Jennifer Teege stumbled upon a book in a Hamburg library seven years ago, the biracial German woman who was given up for adoption as a child was stunned to discover a deep family secret that shook her to the core.

Her maternal grandfather was the brutal SS Commander Amon Goeth, who ran a concentration camp in Plaszow, Poland, in World War II and whose cruelty was so chillingly portrayed by actor Ralph Fiennes in the 1993 Oscar-winning movie “Schindler’s List.”

“It really turned my world upside down,” said Teege, who has written a memoir about her soul-searching experience entitled “My Grandfather Would Have Shot Me” — a reference to the Nazis’ racist ideology.

In Israel, her story resonates on many levels. The country is home to the world’s largest community of Holocaust survivors. It is also the place where Teege lived as a student for several years, became fluent in Hebrew and first saw Steven Spielberg’s epic movie — long before she knew the dark secret of her origins.

Discovering that she traced her lineage to a man described as “the symbol of evil” sent Teege into intensive psychotherapy. Her therapist broke down in tears when he heard her tale, she said.

“It was very difficult for me to deal with this because I have a very unique relationship to Israel and with the Jewish people,” said the 44-year-old Teege, now a mother of two. She spoke to The Associated Press on the sidelines of the Jerusalem International Book Fair that showcased her book’s Hebrew edition. An English version is coming out in April.

Goeth was notorious for shooting Jewish inmates for sport at the concentration camp in Plaszow, a Krakow suburb, and for getting his dogs to attack them. The German industrialist Oskar Schindler saved more than 1,200 Jews by bribing Goeth and other Nazis to have them work in his factories rather than be sent for extermination in death camps.

Known as the “Butcher of Plaszow,” Goeth was convicted as a war criminal and hanged in 1946.

Teege’s astounding revelation and the book that followed were just the latest chapters in her troubled biography, from a childhood spent in foster homes to a prolonged estrangement from both her biological parents, to her struggles with prejudice in Germany because of her dark skin and the suicide of her grandmother, with whom she was very close.

It all led to several bouts of depression, but she said that finding out about her ancestry helped bring a “sense of closure.”

“Life is like a puzzle, so today I have a lot of pieces that were missing,” she said. “It is a story that you would never ever invent because no one would believe that it is true. But it is true.”

Teege’s maternal grandmother, Ruth Irene Kalder, was a secretary in Schindler’s factory and it was he who introduced her to Goeth, whose wife remained in Austria while he ran Plaszow.

Their affair produced Teege’s mother, Monika Hertwig, whose memoir “I Have to Love My Father, Right?” was the book Teege found in the Hamburg library that set her on her journey.

Teege’s mother had a brief affair with a Nigerian student but was already in another relationship by the time Teege was born in 1970, and she was sent to an orphanage as an infant. She maintained occasional contact with both her mother and grandmother until she was formally adopted at the age of seven. When she was 13, she found out that her grandmother had killed herself and only much later in life did she track down her biological father in Africa.

In her early 20s, long before discovering her family legacy, she followed a friend to Israel, where she learned Hebrew and completed an undergraduate degree at Tel Aviv University. She then returned to Germany, married and started a family.

She sees a physical resemblance between herself and Goeth but believes he would turn over in the grave if he learned he had a black granddaughter with close ties to Israel and Jews.

She said one of the things that motivated her to write her book was reading an interview with the grandniece of Nazi leader Hermann Goering, who told the AP in 2008 that she had herself sterilized to end her blood line.

Teege rejects the premise of such an extreme measure.

“You decide who you want to be. It is your character and you set an example that you can be different. It is not connected to genes,” she said.

The hardest part for Teege was reconciling how Goeth, a killer of Jews, was also the man her grandmother deeply loved.

“I cannot understand how she could have loved him. I think this was the biggest problem that I had,” she said.

In Israel, Teege met with one of the few people left in the world who actually came face-to-face with Goeth.

Rena Birnhack, an 88-year-old Holocaust survivor who was on Schindler’s list — the famous list naming those who were to be spared for labor — remembers being confronted by a tall, daunting Goeth at the “selection” line after the Krakow ghetto was liquidated.

Goeth decided who would be deported to Auschwitz and who would live a bit longer in his labor camp. Under a blanket, Birnhack held two puppies and offered them as a gift. Goeth let her live.

Decades later, reading Teege’s book, Birnhack found out Goeth kept the puppies and Kalder raised them in their home inside the Plaszow camp. She asked her granddaughter to track down the author and they met in the Israeli city of Haifa last week.

“All the memories came rushing back,” an emotional Birnhack said of the meeting. “Among the hundreds that he killed, he kept me alive … I can’t forgive the Germans for what they did to us but I have sympathy for Jennifer.”