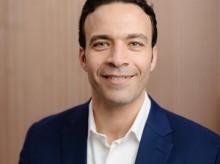 Hamdy Farid likens his path from a modest upbringing in Egypt to a top leadership position at Nokia to that of a typical immigrant story.

After earning a computer engineering degree from Alexandria University, and briefly working in software in Cairo, he departed the scorching Middle East at age 24 to seek a brighter future in frigid Ottawa, Canada to tap into the early 2000s tech boom there.

Three days after landing, he got his first interview. Two days after that, he started his first job at a small start-up that was later acquired by IBM. Within a few months he was at Alcatel, kicking off a 20-year career in which he moved up the ranks in a variety of positions that included Research and Development, Product Management, Product Marketing, Pre-Sales, Services and Care. He eventually became a vice president at Nokia and head of the Business Applications unit in Cloud and Network Services, where he directs a 750-million-euro business and a staff of over 3,000 people.

“I can give you a nice story about how I planned my career and my life, but, in reality, it is a chain of challenges that pushed me outside my comfort zone, forcing me to learn something new about the business and more importantly about myself,” said Farid, 45. “However, looking back now, I can see that every job I took in my career got me ready for this role. The last 20 years of my career really led me to this position.”

Farid described his job as creating products and services that connect networks to the business domain by defining the optimal way to operate the ecosystem securely, creating innovative services to benefit the end user and ultimately creating new revenue streams.

He said his personal goal was to drive innovation to the extreme, creating true autonomous operation, security, analytics and monetization products that optimize the experience of customers. He said reaching that goal would propel Business Applications to a number one spot in the market and drive the business past one billion euros in annual business revenue.

“I love creating stuff from scratch. That’s what engineers do, that’s what we go to school to learn – how to create things,” he explained. “So, whether that’s to create a brand-new life for myself, creating a new product or a new technology, it’s just going through the process and then being able to say to myself ‘I made that happen.’”

Much of the drive goes back to when he was a 10-year-old who accompanied his older brother to the faculty of engineering in Alexandria. That’s where he decided upon a single-minded goal that “this is what I want to do.”

Today, Farid lives in Ottawa with his wife and two teenage children in a trilingual English-Arabic-French home. He’s a self-claimed chef who loves to cook and explore various recipes.

Another way he decompresses outside work is in motorcycle racing, where he takes pleasure in riding as fast as he can and passing his fellow racers.

“Riding is all about discipline in everything you do, how you look after the machine, how you plan your approach and how you execute,” he said. “It’s an extreme sport but it’s mentally relaxing.”

He often recalls with appreciation his journey when meeting fresh graduates joining the workforce for the first time and while making the now far more convenient calls to his mother in Egypt.

“The first phone call I made home when I arrived in Canada cost almost $200,” he remembered with a smile. “Now whenever I call my mom, I know what is happening behind the scene and I know how the call is being managed, routed, secured and billed. Sometimes I realize that this call is running through one of my products. That makes me proud.”