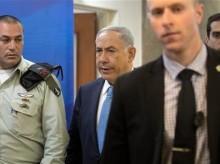 But after weeks of negotiations with potential partners, Netanyahu is finding the task harder than expected and is flirting with the idea of reaching out to his main dovish rivals to form a unity government. As he decides which path to take, he will seek an additional two-week extension to put his coalition together.

Which way Netanyahu goes will have broad implications. If he sides with the hard-line allies that he often calls his “natural” partners, Netanyahu will have a solid parliamentary majority of like-minded parties that could avoid much of the infighting that plagued the outgoing government and provide some welcome political stability at home.

But such a coalition — averse to peace moves with the Palestinians and in favor of expanded settlement construction in the West Bank — quickly would find itself on a collision course with the international community at a time when Netanyahu is already feuding with his allies over the moribund peace process and a nuclear deal with Iran that he loathes. A unity government that includes his leftist rivals would help blunt that looming international isolation.

Throughout the heated campaign, Netanyahu ruled out the possibility of joining forces with Isaac Herzog and his center-left Zionist Union and vowed to rule from the right.

Election results gave his Likud Party 30 seats and secured him a potential 67-seat majority of the 120-seat Knesset along with his traditional allies. In negotiations, however, these allies have made demands to head powerful government ministries, and an initial four-week window to form a new government is now set to expire.

On Monday, he is scheduled to meet Israel’s largely ceremonial president, Reuven Rivlin, and seek a two-week extension. Under Israeli election rules, if he fails to form a coalition during that time Rivlin then can assign someone else the task of doing so.

Few expect it to come to that, and the 67-seat right-wing government seems to be the most likely outcome.

Netanyahu looks close to finalizing deals with two ultra-Orthodox parties, Shas and Yahadut Hatorah, who are seeking ministries and parliamentary committees with large budgets catering to their constituents. He also appears to be close to a deal with the centrist, economics-focused Kulanu party.

But large gaps remain with the two other pieces needed to complete the puzzle, the nationalist Jewish Home and Yisrael Beiteinu parties, both of whom are led by long-time Netanyahu associates who have a tumultuous relationship with the boss.

Despite disappointing election results, both parties are demanding top Cabinet posts and major influence that are disproportionate to their numbers. Netanyahu has yet to budge and has signaled he may leave them out.

Tsahi Hanegbi, the deputy foreign minister from Netanyahu’s Likud Party, said the prospect of Herzog joining the coalition only was becoming a possibility due to the hard-ball approach of the right-wing parties.

“It is rising only as an extreme scenario whose chances of coming true are a result of the Jewish Home or Yisrael Beitenu, either both of them or one of them, stubbornly refusing to show flexibility,” he told Israel’s Army Radio Sunday.

While the threat may be a pressure tactic, there are large issues at stake. Despite his rhetoric, aides acknowledge that Netanyahu is concerned about clashes with his allies in the U.S. and western Europe.

Increased settlement construction, a prolonged absence of Palestinian peace talks and nationalist legislation that undermines Israel’s democratic nature would surely draw a strong rebuke and perhaps even calls for sanctions and boycotts. With his relations with President Barack Obama at a low point following clashes over Mideast peace and the Iranian nuclear talks, there is a real fear that Israel’s top ally may rescind its automatic protection of Israel at the United Nations and other international bodies.

Netanyahu has partnered with his adversaries in the past to shield himself from similar fallout.

In 2009, he added Labor Party leader Ehud Barak as his defense minister and point man to the West. And in his last government, he brought in dovish ex-foreign minister Tzipi Livni to be his chief peace negotiator.

Herzog is under heavy pressure from his followers not to offer Netanyahu that political cover again. Both men have denied reports of a secret meeting. Over the weekend, Herzog vowed to go to the opposition.

But Herzog’s Labor Party, the main partner in the Zionist Union, has a long history of ousting its defeated leaders, so Herzog also may be tempted to jump at a chance to gain some influence and job security — most likely as Netanyahu’s foreign minister. Herzog is the seventh leader of the party since it last won a national election in 1999.

Herzog’s only hint of common ground with Netanyahu was a position paper issued by his party that backed Netanyahu’s opposition to the recent U.S.-led framework nuclear deal with Iran. On this crucial matter, it said “there is no coalition or opposition” in Israel.

So far, Herzog’s party rank-and-file seems to oppose joining Netanyahu and appears eager to watch a hard-line government fail. But there are also growing voices in Israel saying that Herzog’s Zionist Union does not have the luxury to make that kind of cold political calculation.

“Its presence in the coalition is critical to preserving Israel as a liberal democracy,” liberal columnist Carlo Strenger wrote in the Haaretz daily newspaper. “Ultimately, the idea of staying in the opposition is based on a deep illusion: It is that the liberal center-left is likely to regain power in the foreseeable future, and that Israel’s electorate just has to realize how destructive the political right’s policies are.”