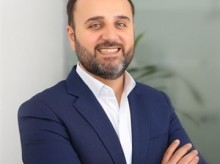 While studying business administration at the University of Texas at Dallas, Issa Eid was hired as a product quality analyst at Nortel Networks in Dallas. Human resources and leaving the Lone Star state were the furthest things from his mind.

All that changed when he joined the HR Mobility department at Alcatel, building the IT system to manage the ex-pat employees. That’s where he discovered that he both enjoyed personnel issues and that he wished to travel himself.

Thus begun a journey that would take Eid from the realm of IT to HR, through stints in Paris and Cairo before settling in Dubai. Today, he leads the People organization for Nokia’s Cloud and Network Services, forging the business group’s working culture and overseeing its staff of over 21,000 employees.

“Being with the people, working with the people, trying to understand the challenges, that’s my passion,” he said. “I like the coaching, the mentoring, the guidance of it. HR is not just about the process or the tools or the policy. It’s really finding solutions and being a partner to the business to find opportunity.”

Eid was born in Amman, Jordan and mostly raised by his grandmother since his father was in the oil business and travelled extensively throughout the Middle East. At 16, the family relocated to Texas, and Eid saw his future there.

“I figured I’m in the United States, that’s where dreams happen,” he explained. “It was the mobility assignment that really got me interested in the world.”

It led to his placement in the Alcatel corporate headquarters in Paris, where he was tasked with building what was known as the “back office of HR,” a data-driven job to centralize the HR tools of the company. But after four-and-a-half exciting years in the French capital, he was ready for a change.

“I wanted to see how the whole HR process we did in the backdrop really operated on the ground,” he said. “I also wanted to get married and that’s when I got my itch to go back to my roots and find an assignment in the Middle East.”

That’s also where he truly became a “people person.”

“I enjoy the direct touch, the direct contact to help someone,” he said. “If you send me a CV and I can find someone a job, the rush I get from that is amazing.”

The 2011 revolution in Egypt prompted the move to Dubai, where he headed the Middle East and Africa region HR department for Alcatel-Lucent and later for Nokia. This year he was promoted to VP People for CNS.

“The objective of this job is to translate the business strategy into the people agenda. If these are the goals, what are the people doing to achieve it?” he explained. “We need to define our identity, that’s the main challenge. Coming together into one CNS is the future because without that we are not going to deliver.”

To do so, he said everyone in the organization needed to embrace the Nokia Essentials of being open, fearless and empowered and he said he sought to embody those words by also speaking openly about shortcomings, particularly when it comes to gender diversity.

“We have a lot of work to do. The numbers speak for themselves. There are other elements in diversity and inclusion but that one really stands out because it’s not good,” he said.

Issa said it was being addressed and improved at the lower levels, noting that 31% of new hires were women. But “the problem is with promotion” and he was placing his focus on rectifying the discrepancy at the top.

Issa, 40, lives in Dubai with his wife and three children, boys aged nine and six, and a three-year-old girl.

He starts nearly every day with boxing training and considers Mohammad Ali his role model.

“It’s my escape. I get all that negative energy out on that bag,” he said with a chuckle.

Another favorite activity is retreating to the nearby desert with his family for a few days.

“It’s beautiful. You can just forget about everything there,” he said. “There is no connection. It’s perfect.”