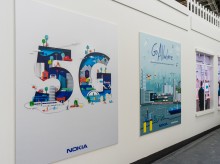 The super speed and low latency of 5G technology leaves little to the imagination, and dreamers salivate at its potential. At the same time, the breakthroughs have also spawned a slew of conspiracy theories with little connection to reality.

5G’s dizzying upside ranges from creating the ability to perform long-distance medical procedures to deploying autonomous vehicles and downloading a two-hour movie in under four seconds.

While some of these promises may be premature, even overblown, the internet has generated a wide array of other scares that are just plain false.

When Telstra rolled out its 5G network it used the opportunity to take a dig at the doubters with the following post: “The 5G towers will help you download your conspiracy videos faster.”

Here’s a brief look at some of the myths surrounding 5G, and the truths behind them.

The Claim: Its stems from the fact that radio waves “radiate.” Ionizing X-rays and gamma rays break apart molecular bonds and damage DNA.
The Truth: 5G waves are non-ionizing and radio waves have been around for decades. Despite copious research, there is still no scientific consensus on whether phone radiation leads to cancer.

-    5G’s high frequencies are going to microwave our brains

The Claim: This myth originates from a graph that physicist Bill Curry presented in 2000 and showed a steep increase in microwave absorption by the brain at higher frequencies. His finding led to fears of various 5G health risks.
The Truth: Multiple scientists have since debunked this thesis since Curry’s data looked at exposed tissues in a lab rather than cells deep inside our body. His research also failed to consider the “shielding effect” of our skin that can block out higher radio frequencies and protect our insides.

-    A 5G test killed hundreds of birds in the Netherlands

The Claim: A Facebook post claimed that a 5G test resulted in the death of some 300 birds in a park in the Hague in October 2018.
The Truth: No tests were conducted at the time the starlings died. The official cause of death was bleeding due to trauma and researchers concluded they probably died from hitting objects at great force, perhaps caused by panic due to a hunting owl. Tests also found traces of a toxin from the seeds of berries the starlings are known to eat. It’s not unheard of for large groups of starlings to die this way.

The Claim: It originates from some meteorologists initially expressing concern that 5G networks would interfere with the satellite data they rely on and would disrupt their ability to accurately predict hurricanes and tornadoes.
The Truth: 5G is a ground-based system and does not control the ionosphere through satellites. Atmospheric scientists have also said 5G has promising weather-related applications.

The Claim: 5G employs sub-millimeter waves, just like a prototype device the U.S. military developed for crowd control.
The Truth: Still, it’s quite a stretch to connect between the two. The Active Denial System, also called the heat ray, fires a beam that penetrates the top layer of skin and produces an unpleasant heating sensation.

The Claim: It was created to spy.
The Truth: While the uber-connected world that 5G supports will make us more vulnerable to cyberattack, there is no evidence that the technology itself was designed for espionage. Previous generations of mobile systems were just as capable of snooping. The 5G network, however, will likely become a focus of national security as evidenced by concerns over granting the Chinese government-backed Huawei license to deploy nationwide infrastructure in the West. Diversifying the 5G vendor market will also provide greater security.

The Claim: This conspiracy gained some traction in the early days of the COVID-19 pandemic since the virus originated in China, which also deployed one of the world’s largest 5G networks. It generated enough of a buzz to lead some people to burn down cell towers and threaten broadband engineers. One conspiracy claimed that Bill Gates invented 5G to decrease the world’s population.
The Truth: The rollout of 5G began in 2018. South Korea and parts of the U.S. rolled it out first. Oh, and germs can’t be teleported. Twitter eventually announced that it would remove “unverified claims” linking 5G to coronavirus.

The claim: Bill Gates has invented a stamp-shaped vaccine that goes under the skin, linking to people’s social media profile to control them through 5G.
The truth: Come on. Get a life!