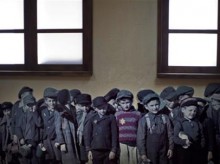 KFAR HAROEH, Israel (AP) — When David Hershkoviz was a child, he used to wake up in the middle of the night to the sound of his mother screaming in her sleep, knowing that she was reliving the horrors of the Holocaust.

In time, he learned of the traumatic wartime experience that haunted her most — being torn away from her own mother at the Auschwitz concentration camp’s selection line, where at 21 she was forced into work and her mother dispatched to death.

“That separation never left her,” said Hershkoviz, 54, his voice quivering as he choked back tears. “She said, ‘I think my mother is angry at me because I left her. … My mother never comes to me in my dreams. I haven’t dreamed about her since we parted. How is that possible?'”

When his mother, Mindel, died two years ago, he wanted to carry on her legacy by bearing witness to the Holocaust. He found help in a first-of-its-kind course teaching the children of Holocaust survivors how to ensure their parents’ stories live on.

Hershkoviz is one of 18 graduates of the Shem Olam Institute’s inaugural four-month “second-generation” course, where children of survivors study the history of the horrors their parents endured and how best to pass it on. The program aims to usher in a new stage of Holocaust commemoration in a post-survivor era.

The German Nazis and their collaborators murdered 6 million Jews during World War II, wiping out a third of world Jewry. Only a few hundred thousand elderly survivors remain, and the day is fast approaching when there will be no one left to provide a coherent first-person account of the ghettos and death camps.

With Israel marking its annual Holocaust remembrance day this week, that has become the central challenge for Holocaust institutes around the world as they rush to collect as many records and belongings as possible before the live testimony of survivors is a thing of the past.

Shem Olam looks to take this trend one step further, by not only recording survivors’ biographies but also the emotional experiences that can be relayed through their children.

“We are here to give a different narrative of the Holocaust. We’ve heard the story of tragedy, we want to give the story of how people coped inside this living hell,” said Avraham Krieger, the institute’s director.

Krieger, himself a child of survivors, said the second generation grew up in homes that were haunted by the past and where the concept of a grandparent was nonexistent.

He believes that in 100 years, when people recall the Holocaust, they will be most interested in how people lived rather than how they died. He says it is his generation’s responsibility to counter the myth of Jews meekly marching to their deaths.

“The story of the Holocaust is how a person copes in such an environment,” he said. “An extreme reality, which has no parallel in modern history, of people who are in the most dire human situation and are still maintaining their humanity, still maintaining something from their values.”

Deborah Dwork, director of the Strassler Family Center for Holocaust and Genocide Studies at Clark University in Worcester, Massachusetts, welcomed the initiative, saying it would be very meaningful for future generations to have live contact with people who had personal relationships with survivors. She said there are still some Americans old enough to remember the powerful experience of meeting someone who was the child of a slave.

“That physical presence of a second generation person will lend authenticity to the history and will give it another dimension,” she said, before adding a warning. “I am a historian so what I want to say to them though is, ‘You inherited the legacy of trauma but it is not your history. … The history your parents lived is their history, not yours.'”

Established in 1996, Shem Olam says it looks to provide an alternative to the more established Holocaust museums by providing the “story behind the story” and getting beyond the victimization to focus on issues of faith and resilience. Krieger said “Shem Olam” derives its name from the same passage in the book of Isaiah that mentions “Yad Vashem” — the name of Israel’s official Holocaust memorial. Yad Vashem is Hebrew for “a memorial and a name,” while Shem Olam roughly translates into “everlasting name.”

Located in a modest three-story building inside a Jewish seminary in this small central Israeli village, it features Holocaust-inspired artwork and artifacts collected from the destruction, such as a charred Torah scroll.

Shem Olam, which receives minimal state funding and mostly exists off contributions, focuses on documenting religious life in the Holocaust. It holds public lectures and arranges delegations to former Jewish communities in Europe. But its flagship project of late has been the second-generation outreach program.

“Today we, as second generation, know which camp my mother and father were in, and how much bread they got is an important story. But it is more important to find out what kind of person they were,” said Krieger, 53. “We never really asked the tough questions of how our parents coped emotionally.”

Besides finding a kinship with others who shared a similar background, Hershkoviz said the course helped him understand his mother better. She died at the age of 90 with 13 great-grandchildren, and though her biography is well chronicled, Hershkoviz is determined to keep her “emotional experience” alive as well.

“The most significant thing I have to pass on from my mom is survival and how she built a new family,” he said. “I feel a responsibility to tell her story. There is no one else to do it.”