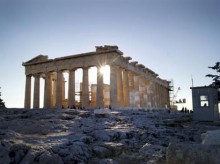 The Parthenon, an Athens temple dedicated to the goddess Athena, the city's patron. (Jerrin Heller via AP)

ATHENS, Greece (AP) — As a seaside metropolis with a lively outdoor vibe and dozens of picturesque islands beckoning nearby, Athens is more often considered a summer tourist destination than a winter escape. But if you’ve got more than beaches on your mind, there’s plenty of upside to a brief cool visit that avoids the crowds and heat of summer.

Athens is one of the world’s oldest cities, often called the cradle of Western civilization. Visitors will find monuments to ancient history on nearly every path they take. But with interesting neighborhoods, trendy shops and a variety of cafes and tavernas serving that famous Greek cuisine, Athens’ attractions are not all rooted in the past.

The city is easy to get around by bus or metro and most major attractions are within walking distance. Temperatures in January average 50 F (10 C). Here’s a suggested itinerary for a three-day visit.

The centerpiece of ancient Greece and modern-day Athens, the Acropolis literally stands above everything else and looms majestically over the city. It is particularly striking to view at night, when brilliantly illuminated. A 10-euro entrance fee to the compound takes you along a course of the central structures of Greek mythology as you climb past the Theatre of Dionysus, the Propylaea, the Erechtheion and the Herodeon — which still hosts the occasional live performance. A 20-minute walk to the top unveils the most famous structure of all, the Parthenon — a former temple dedicated to the goddess Athena, the city’s patron. However, the scaffolding of its prolonged restoration project takes a bit away from its grandeur.

Most of the Acropolis’ treasures are housed in the nearby Acropolis Museum (entrance 5 euros), such as colossal stone statues depicting mythological scenes from ancient Greece. One of the museum’s most impressive features is actually the architecture that includes glass floors through which you can see the ruins that lay below. A full view of the Acropolis spreads out from the second and third floor galleries.

There are plenty of other ancient sites to visit across the city, but the most comprehensive is likely the nearby Ancient Agora on the Acropolis’ northwest slope with its impressive Temple of Hephaistos nestled among ruins overgrown with green foliage from the winter rains. It houses a large assortment of ancient vases, figurines, coins and headless statues.

There are views of the Acropolis from everywhere, but the best one in town is from Lycabettus Hill. After a pleasant but steep hike up a winding trail, a panoramic view of the sprawling city is revealed. There’s a little church at the top, Agii Isidori, and ample angles to photograph Athens. An early morning visit will put the sun behind you as you gaze across the city toward the Acropolis with the shores of the Aegean Sea lapping in the distance. Part of the fun is getting there via a stroll from the center of town through the upscale Kolonaki neighborhood, with its bustling cafes and designer merchandise.

This is the heart of the city and site of mass protests in recent years over the Greek economic crisis. The square is right in front of parliament and the tomb of the unknown soldier, where soldiers in kilt-like garments and red leather clogs with black pompoms perform elaborate changing of the guard ceremonies several times a day.

To the west, busy Ermou street offers the city’s primary shopping district and leads toward the neighborhoods of Monastiraki, which has a large, busy Sunday morning flea market, and Psyrri, with a wide selection of bars and live music tavernas. Eateries include O Kostas (5 Pentelis St.), a hole in the wall known for excellent souvlaki. At Lukumades (Eolou Street and Agias Irinis Square), get the deep-fried doughnut ball doused in honey.

Just south of Syntagma is Plaka, a historical neighborhood built upon the ancient town of Athens. Known as the “Neighborhood of the Gods” because of its proximity to the Acropolis, its maze-like narrow streets are a joy to explore. Amid remnants of archaeological sites, there’s street art, small shops and restaurants. A real gem is Psaras, an old-style taverna off the main drag, popular with locals and tourists. The baked feta pastry appetizer dipped in honey and sprinkled with sesame seeds is a treat to warm up a winter day.

Besides the Acropolis Museum, the neighborhood is also home the Jewish Museum of Greece (6 euros) and the Museum of Greek Folk Art (2 euros).

A same-day excursion to one of the three nearby islands of Aegina, Poros or Hydra is possible, but with a limited winter ferry schedule the journey will likely take longer than the actual stay. A more rewarding outing is the 90-minute bus ride along the “Greek Riviera” down to the southern peninsula of Sounion, where the Temple of Poseidon reveals a breathtaking view of the sea. The deep blue waters ripple around the ancient hilltop structure dedicated to the god of the sea. The salty breeze offers an escape from the bustle of Athens, as mountains jut out of the sea and the rocky ancient landscape provides a tranquil parting from Greece.