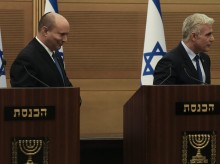 The Bennett government collapsed because of baseless fearmongering, a tribal devotion to Likud and a cult of personality surrounding its leader on trial for corruption. Op-ed published in The Times of Israel

Throughout the year-long tenure of Naftali Bennett and Yair Lapid’s unity government, there has been a common refrain coming from supposed Israeli hardliners.

This was a dangerous experiment that weakened the Jewish state, they argued, a government that relied on leftists and “terror supporters” and sacrificed national interests in favor of empty bipartisanship. What Israel really needed, they charged, was a “fully, fully right-wing government that will restore security.”

It was this constant barrage of accusations of behavior bordering on treason that eventually broke the spirit of the more hawkish members of Bennett’s Yamina faction and ultimately brought about the government’s downfall.

Now that the ambitious coalition is finally falling apart, it is fair to ask these supposed guardians of Zionist purity an honest question: Can you name a single left-wing thing this government did?

Sure, it must have been difficult to watch “bleeding-heart liberals” like Merav Michaeli and Nitzan Horowitz serve as Cabinet ministers and, heaven forbid, see an Arab like Mansour Abbas in a position of influence. But can anyone truly pinpoint any policy that countered the traditional right-wing ideology?

After all, this was a government that didn’t make an inch of progress toward Palestinian statehood and didn’t evacuate a single illegal settlement. It stood firm against an Iran nuclear deal. It stopped the Qatari cash flow to Hamas in Gaza and pummeled the militant group for even the smallest provocation. It isolated Palestinian President Mahmoud Abbas and rubberstamped the Jerusalem Day flag march and other expressions of Jewish nationalism.

It’s easy to see how Arab and left-wing parties could be frustrated with the compromises they had to make for the government to come about. But right-wingers? On paper at least, Bennett along with top ministers Avigdor Lieberman, Ayelet Shaked and Gideon Saar outflanked Benjamin Netanyahu.

Nadav Haetzni, a pro-settlement columnist, acknowledged as much Tuesday in the conservative Israel Hayom daily, calling the outgoing government “more right-wing and activist than any of Netanyahu’s governments.”

So, what exactly was the right-wing problem with the Bennett-Lapid government?

It’s time to be honest: this government collapsed because of baseless fearmongering, a tribal devotion to Likud and a cult of personality that still surrounds a leader on trial for corruption.

As in America, many on the Israeli right have stopped defining themselves based on ideology but rather on nativism and resistance to democratic norms. Since when have good governance, statesmanship and plain decency become a political wedge issue? It’s no surprise, then, that the heirs to Israel’s founding generation of revisionists, the sons of Begin, Shamir and Meridor, for example, can no longer find their place in Likud. They’ve become Israeli versions of RINOs (Trump’s epithet for those defined as “Republicans In Name Only).

Yes, the outgoing government included the leftist factions of Labor and Meretz. But their leaders were marooned in social-centric ministries such as health, transportation and environment. Knowing full-well that Israel is a right-wing majority nation, they put their most fervent ideologies on ice. Acknowledging the sensitivity, Abbas didn’t even seek a ministry to head and dissident leftist lawmakers didn’t make life any easier.

But this wasn’t enough for the growing extremists brewing in Likud, the Religious Zionism party and the ultra-Orthodox parties. Having already emerged victorious in quashing the prospect of a two-state solution to the Israeli-Palestinian conflict, now they had to eliminate any behavioral remnant of that policy too, such as civility in political discourse.

To that end, these parties engaged in a scorched earth rejectionist approach, opposing even legislation that was core to their beliefs, such as extending legal protections for Jewish West Bank settlers.

Never mind that toppling this government will likely be an exercise in futility, since all the latest polls predict continued deadlock. Had Likud simply ditched the indicted Netanyahu, it could have easily formed a coalition with the likes of Bennett, Lieberman, Saar and more. By far the strongest party in parliament, Likud lost power because of its blind devotion to Netanyahu and his narrow interests.

The result was that the cooler heads on the right managed to coalesce into a historic union across the political spectrum that maintained their core ideology while projecting a sense of unity that aimed to calm, at least temporary, the nasty Netanyahu-era vitriol that threatened to tear the country apart.

Without the ideological rivalries of the past to stand upon, Israel’s political map is splintered. It is now defined mostly by identity politics, with the ultra-Orthodox, nationalist settlers and working-class Mizrahi periphery on one side and the wealthier, mostly Ashkenazi, educated class of the Tel Aviv metropolis on the other. The main points of contention tend to revolve less around policy and more around decorum, tradition and grievances.

Bennett tried to upend that dynamic, presenting a united Israeli front. But it was too much to him to overcome. The observant, skullcap-wearing, former settler leader quickly became a heretic in the eyes of the hard right for merely trying to work across the aisle.

To his credit, Bennett kept at it until he could no longer. In gracefully walking away as he did this week, he continued to exhibit the type of stately demeanor that helped bring about this “great experiment” and which had long been missing in the Netanyahu-dominated, “us-against-them” culture of winning at all costs. Whether or not this marks the end of Bennett’s political career, that vision and conduct will remain the legacy of his short-lived government.

“In a world where domestic polarization is becoming almost the single biggest challenge, the experiment succeeded,” Bennett himself concluded in an exit interview published Wednesday in The New York Times. “In the past year we restored decency, honesty and even meeting commitments.”

Here’s hoping that that too doesn’t come to an end.