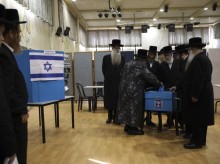 KFAR SABA, Israel (AP) — Yamit Dulberg considers herself a traditional Israeli woman with right-wing views who would usually vote for Prime Minister Benjamin Netanyahu’s Likud Party. But this week the 37-year-old mother of two cast her ballot for his main rival, in part because she’s sick of his ultra-Orthodox Jewish allies and their disproportionate power over daily life.

“Something has changed in recent years, the coercion has gone overboard,” said Dulberg, who runs a small family-run jewelry business. “We are a Jewish state, but not a religious state.”

In Israel’s secular heartland, religion played a central role in this week’s deadlocked election. For many, a vote for the opposition was driven by a desire to keep rabbis out of their schools, businesses and love lives.

With the Palestinian issue almost completely off the agenda, and a general consensus about security challenges, matters of religion and state took center stage.

Veteran firebrand Avigdor Lieberman positioned himself as the primary power broker by making these matters his signature cause and defecting from Netanyahu’s camp over what he called its capitulation to the ultra-Orthodox. He now insists on a secular unity government to end their outsized influence, and neither Netanyahu nor former military chief Benny Gantz, whose centrist Blue and White party won the most seats, seems capable of forming a coalition government without him.

Ultra-Orthodox parties only represent about a tenth of the population, but larger parties have historically relied on them to assemble majority coalitions. That means the ultra-Orthodox are often in position to bring down the government if their demands are not met.

They use their political clout to sustain a segregated lifestyle centered on study and prayer, and raising large families on taxpayer-funded handouts. They also run a network of schools that often teach little math or English, and have blocked legislation to require their community to serve in the military, like most other Jewish citizens.

The ultra-Orthodox insist their young men serve the nation through prayer and study, thus preserving Jewish learning and heritage, and by maintaining a pious way of life that has kept the Jewish faith alive through centuries of persecution. They say they are unfairly targeted by the secular majority.

Arye Deri, whose ultra-Orthodox Shas party grew in power, accused Lieberman and others of inciting against his community.

“You’ll tell us what to teach in our schools?” he told the YNet news site. “I wish upon his voters that they get some of our education and learn a little courtesy.”

Experts say the cloistered communities of the ultra-Orthodox are being left behind by modern society, creating a culture of poverty that threatens the future well-being of the entire country.

On top of carrying the military and financial burden, the secular majority resents having the ultra-religious encroach upon their lifestyle and civil liberties. The ultra-Orthodox establishment prevents public transportation and most commerce on the Sabbath and wields a monopoly over matters of marriage, burials and conversions. In recent years, they’ve also delayed infrastructure projects and archaeological digs over religious concerns.

Dulberg said she was particularly troubled that Israelis could not have civil marriages and that gay couples have such difficulty marrying and raising children.

“This country is split down the middle and no one should force anything on the other,” she said. “Just like I wouldn’t drive a car through their neighborhood on the Sabbath and park in front of their synagogue, they should stay out of my life.”

She said her husband, who was a leftist, even considered voting for the nationalist Lieberman because of the ultra-Orthodox. But eventually they both settled on Gantz’s Blue and White party, which has also promised to advocate for the secular.

“My opinions are right-wing, but that’s not the issue anymore,” she said, seated outside City Hall in Kfar Saba, a midsized city northeast of Tel Aviv. “The world has changed but religion hasn’t. That’s a problem.”

Shmuel Rosner, a senior fellow at the nonpartisan Jewish People Policy Institute in Israel, said Lieberman’s rise showed that many right-wing Israelis are tired of their elected officials being so tightly bound to the ultra-religious.

“There is a large group of regular Israelis in the middle,” he wrote in the Maariv daily. “This is what they said for the second consecutive time: we want normalcy.”

In Kfar Saba, municipal elections have centered on issues such as budgets for religious authorities, whether shops should stay open on the Sabbath and how much faith should be discussed in schools.

On Tuesday, Blue and White earned 46% of the city’s vote — 20% more than its national figure and twice as much as Likud. They were followed by the left-wing Labor and Democratic Union parties — both of which fared far worse nationally — and then Lieberman, according the figures released by the Central Election Committee.

“The ultra-Orthodox use religion for their own purposes,” said 77-year-old retiree Eli Casspi, who voted Labor. “They can live their lives and let me live mine. But they don’t. They force it on me.”

“This time the agenda was different,” he said. “Israelis voted more on religion and state as a result of the political growth and appetite of the ultra-Orthodox parties.”

The ultra-Orthodox interpretations of piety have also created a rift with the Jewish Diaspora, alienating many who belong to the more liberal Reform and Conservative streams, which account for the majority of American Jews. Ultra-Orthodox rabbis have repeatedly questioned their faith and scuttled plans to upgrade a mixed-gender prayer area at Jerusalem’s Western Wall.

Julietta Tolchinsky, a 47-year-old mother of three who emigrated from Argentina, said she feared religious influence creeping into the school curriculum.