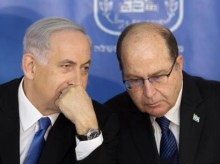 JERUSALEM (AP) — A public spat between Prime Minister Benjamin Netanyahu and his defense minister has exposed a simmering rift between Israel’s security establishment and its hard-line government, pitting the Israeli leader in a risky showdown.

The dispute has spotlighted the sensitive debate over the military’s role in public discourse in Israel, where security figures have occasionally served as a moderating element to nationalist governments. The surprising and normally discreet dynamic has burst into the public sphere at a time when Israelis are wrestling with a sense of being at loggerheads with much of the world.

After a series of public disagreements with security figures in recent months, Netanyahu urgently summoned his defense minister Monday to rebuke him for encouraging top military generals to continue speaking their mind in public, even if their comments contradict government sentiments.

The controversy was prompted by comments this month by Israel’s deputy military chief, Maj. Gen. Yair Golan, who compared recent trends in Israeli society to the atmosphere in Nazi-era Germany. Netanyahu called Golan’s statement, made in a speech marking Holocaust memorial day, as “outrageous” — while Defense Minister Moshe Yaalon supported the general’s right to speak.

In Israel, top officers are respected household names who often transition smoothly into politics after shedding their uniforms. Because the army is generally the country’s most admired institution, top brass have been forgiven the occasional inclination to discuss history, education and troubling trends in society.

But a series of recent comments, highlighted by Golan’s, have irked the government. Yet Yaalon on Sunday told a gathering of high-ranking officers to remain independent in thought and speech.

“Do not be afraid. Do not hesitate,” he said. “A good army is an army whose commanders, junior and senior alike, feel confident in their ability to speak their mind at all times. Continue to act in keeping with your human conscience and compass, and not to follow the way the wind is blowing.”

An outraged Netanyahu countered that military officials can speak freely in closed circles, but should not delve into political disputes in public. Ministers in his Cabinet largely lined up behind him on Monday.

Following their meeting, Netanyahu and Yaalon issued a joint statement denying any dispute and asserting that “officers are free to express their opinions in the relevant forums.”

The dispute with the generals has dominated headlines and seems likely to continue — partly driven by increasing malaise among many over the government’s apparent complacency regarding Israel’s half-century entanglement in the West Bank. Under the ongoing situation, Israel rules millions of Palestinians who cannot vote in its elections.

War-hardened generals who have learned the limits of force often tend to be more pragmatic than the hardliners who have been dominant in politics in recent years.

Since taking office in 2009, Netanyahu has repeatedly clashed with his security chiefs over key matters. The late Mossad chief Meir Dagan is widely credited with preventing Netanyahu from ordering a pre-emptive military strike against Iran’s nuclear facilities — with the backing of other key security figures.

The differences have been especially stark in dealing with the Palestinians — particularly since the outbreak of a wave of violence last fall.

Since September, 28 Israelis and two Americans have been killed in Palestinian stabbings, shootings and car rammings. Nearly 200 Palestinians have also been killed, most said by Israel to be attackers. In several cases, armed Israeli civilians have killed the attackers, winning praise from politicians but drawing accusations from Palestinians and some Israelis of vigilante killings.

Earlier this year, the military chief, Lt. Gen. Gadi Eisenkot, came under fire from parliamentary hard-liners — Netanyahu’s base — for calling on soldiers to use only “necessary force” against attackers and to not kill “every girl with a pair of scissors.”

In March, military leaders criticized a soldier who was caught on video fatally shooting an already-wounded Palestinian attacker in the head — and he is now on trial for manslaughter. But hard-liners and much of the public labeled the soldier a hero and accused the military of getting soft. Netanyahu, for his part, called the soldier’s family to express sympathy.

Golan’s comments widened that gap when, on the eve of the country’s Holocaust memorial day, he warned of “nauseating processes” that he identified in Israel which reminded him of Nazi-era Germany. “There is nothing simpler and easier than hating the foreigner,” Golan said.

Netanyahu said Golan’s words “cheapen the Holocaust” and one Cabinet minister called for Golan to be fired.

Golan’s humanist bona fides were bolstered Sunday when a decade-old recording surfaced in which he is heard telling future army recruits they must avoid harming innocent civilians, even at the cost of a risk to other soldiers’ lives.

Zvi Barel wrote in the liberal Haaretz newspaper that Netanyahu was driving the military into a contradictory role as defender of democracy and even raised the hitherto taboo — and extremely unlikely— notion of a military coup.

“He clearly hears murmurs that indicate that those responsible for the country’s defense are fed up with the circus he is running,” he said.