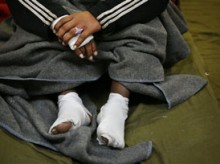 TEL AVIV, Israel — Sitting on a thin mattress in an underground bomb shelter that reeked of urine, Tasfa Mara said he’s happy where he is. The 24-year-old Eritrean escaped forced conscription, beatings and a treacherous trek across three countries before reaching his promised land.

“Only Israel safe,” he said in patchy English, his hands and feet heavily bandaged from lacerations he suffered on the barbed-wire barricade between Egypt and Israel when crossing last week. “All African countries the same.”

Mara may not have a safe haven much longer. This week Israel plans to begin deporting thousands of African migrants who have slipped in through the porous southern border with Egypt. It remains unclear how the expulsions will be carried out and where Israel will send them.

Founded six decades ago in the wake of the Nazi genocide, Israel finds itself torn between a sense of duty to help people fleeing persecution and fears of an onslaught of illegal immigrants. The result has been a confused policy.

The Africans began trickling into Israel in 2005, after neighboring Egypt violently quashed a demonstration by Sudanese refugees, in which at least 27 were killed. The number of new arrivals has surged in recent months as word spread of safety and job opportunities in Israel.

More than 7,000 have entered the country illegally in just over a year, including more than 2,000 this year alone, said Michael Bavly, a representative in Israel of the U.N. High Commissioner for Refugees.

The vast majority hail from Eritrea, where the U.N. says men are often forced into military service, and Sudan, where 2.5 million people have died in a 22-year civil war. Some of the Sudanese have come from the western region of Darfur, where fighting has killed more than 200,000 people and displaced 2.5 million since February 2003.

Israel took in many of the early arrivals, providing shelter and even arranging menial jobs in hotels and on kibbutz collective farms. It recently granted temporary residency status to 600 refugees from Darfur, and gave work permits to about 2,000 others from Eritrea whose lives would be endangered if sent home.

But Israel has vowed the rest will be deported, claiming they are in the country purely for economic opportunities. On Sunday, Prime Minister Ehud Olmert directed authorities to expel 4,500 Africans, including people from Ivory Coast, Ghana and Nigeria, by the end of the week.

Since its independence in 1948, Israel has granted automatic citizenship to Jews, including many from Ethiopia. In recent years, however, it also has opened its doors to others, including tens of thousands of workers from Asia and Africa to fill a void left by Palestinian laborers banned from entering following the outbreak of fighting in 2000. Israel has about 7 million people, and the foreign workers traditionally do grueling manual jobs that Israelis are reluctant to do. The new Africans have quickly joined this work force.

Olmert’s office declined to discuss its expulsion order. But officials said privately it would be difficult, if not impossible, to carry out the order in the coming days.

Just finding them will be difficult. Newly arrived Africans are scattered in shelters, while earlier migrants have moved into apartments in Tel Aviv and elsewhere.

In addition, the U.N. says most of the Africans are formally seeking asylum, entitling them to a lengthy legal review. Even if an order is approved, it’s unclear where Israel can send them.

Egypt, the most likely destination, has made clear it does not want them. Last year, Israel sent 48 African refugees, mostly from Darfur, to Egypt after receiving assurances they would not be harmed. Twenty of those “asked to leave,” an Egyptian Foreign Ministry official said, without saying where they went.

“Egypt is dealing with the refugees in line with the international law and for humanitarian purposes,” the official said, speaking on condition of anonymity because he was not authorized to speak to the press. “Israel has no right to return them.”

Human Rights Watch said the Israeli and Egyptian actions were “unconscionable,” because the migrants faced likely persecution in Sudan because of their time in Israel, which is considered an enemy country.

Shevy Korzen, executive director of the Hot line for Migrant Workers in Tel Aviv, said imposing an arbitrary quota was “ridiculous” and the government was obliged to let the U.N. evaluate each case.

On Monday, immigration police raided several Tel Aviv shelters and detained more than 200 migrants, many of whom were shipped to squalid prisons. Israel’s prison authority denied an AP request to visit the main holding area, located in a remote desert location.

Sabine Hadad, a spokeswoman for Israel’s Interior Ministry, said those with permits would be released, and those whose refugee status is being reviewed by the U.N. would get a limited stay.

Mara and his friends escaped the police raid Monday, then returned to the dilapidated shelter, nearly empty after the roundup.

Speaking in broken English and pointing to his bandaged hands, Mara said he had nowhere else to go. “Eritrea bad. Egypt bad. Sudan bad,” he said. He declined to discuss his past, saying only that two of his six traveling companions were shot down by Egyptian troops near the border with Israel.

Israeli defense officials said the army is working to fortify the border to stop the flow of infiltrators, which now number about 50 a day. Defense Minister Ehud Barak inspected the border Tuesday and vowed to build a 45-mile fence — covering roughly one-third of the border — within two years.

The African migrants said they paid about $750 to human traffickers to cross into Israel. Once inside, they were rounded up by army patrols, who either placed them in prison or released them. Many were bused to Tel Aviv, where volunteers often helped them.

Tel Aviv has embraced them warmly. Most Darfurians now live in apartments, enjoy the city’s welfare services and their children attend its schools. Volunteers have raised hundreds of thousands of dollars and helped arrange thousands of work permits.

“They have been through such traumas. Their motivation is not to come here, it is to escape their fate at home,” said Yael Dayan, deputy mayor of Tel Aviv. “Whoever gets here, we take them in, but the government has to decide on a policy … It will not happen by itself.”

Israel is not a common destination for refugees, but the late Prime Minister Menachem Begin set a precedent in 1977 when he offered asylum to nearly 400 Vietnamese boat people. Human rights groups and high-profile figures like Nobel laureate and Holocaust survivor Elie Wiesel have urged the Israeli government to give Darfurians fleeing genocide a home.

Yassin Moussa, 30, arrived in Israel from Darfur 2 1/2 years ago. After spending 16 months in detention, today he coordinates relief efforts for the new migrants, arranging housing and employment.

Moussa witnessed the execution of his father and uncles and was separated from his mother, sisters and wife when he fled Darfur. He does not know their whereabouts, or if they survived.

Today, he navigates the streets of Tel Aviv with ease, cell phone in hand, communicating easily in Hebrew. “I feel like an Israeli,” he said.