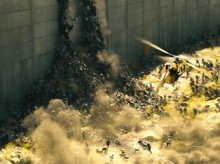 JERUSALEM (AP) — In one of the central scenes of the summer blockbuster movie “World War Z,” Israeli troops funnel Palestinian refugees to safety in Jerusalem behind a massive concrete wall. There, the Arabs and Jews embrace, dance and sing — shortly before they are all engulfed by bloodthirsty zombies.

Even for such an over-the-top work of science fiction, in which billions of people come back from the dead as horrific zombies to terrorize Earth, one of the most improbable plotlines of the film is that Israelis and Palestinians are fighting on the same side.

Granted, the film assumes that a post-apocalyptic world and a supernatural common enemy are needed to achieve such harmony. But the image of an elusive Mideast peace, coupled with the film’s overall positive portrayal of Israel, have not been lost among the region’s war-weary moviegoers.

“It’s a fantasy, and it seems ridiculous to those who live here, but it is still heartwarming to see Israelis and Palestinians coming together,” said Yehuda Stav, a movie critic for the Israeli daily newspaper Yediot Ahronot.

At the core of the cinematic coexistence lies a towering barrier Israel is praised for building to keep out zombies and protect inhabitants of the Holy Land — Jews and Arabs alike. In reality, Israel’s separation barrier with the West Bank — which Israel says is meant to keep out Palestinian suicide bombers — is much smaller but much more contentious. Palestinians call it a symbol of occupation that steals their land, hinders their movement and damages their crops.

In the film, Israel is praised for its savvy, survival instincts and peaceful intentions. It is credited with predicting the zombie invasion and preparing proper defenses, making it one of only two nations to prevent a lethal outbreak.

The other, North Korea, adopts a more draconian solution: It extracts the teeth of all its citizen to prevent people from biting each other and spreading the deadly zombie virus.

The movie depicts the Israeli military as courageous and resourceful, the Israeli people as inviting and humane. Even Israel’s often criticized system of West Bank checkpoints is portrayed as an effective tool to protect both sides.

“If it weren’t for the zombies in the background, you’d think this was an engineered campaign of the Defense Ministry to strengthen Israel’s status in the world,” Israeli movie critic Chen Hadad wrote in City Mouse magazine. The movie opened in Israel last week.

Such a futuristic Israel in “World War Z” has sparked outrage in the real Arab world, where bloggers and moviegoers have slammed the film as a love song to Israel.

“It’s free propaganda for Israel at a time when it occupies other people,” complained Ramzi Taweel, a 38-year-old Palestinian cartoonist from Ramallah in the West Bank. “It portrays Israel as a moral power that protects human beings. It justifies the wall. … The Israeli occupation army in the movie is a humane army that protects the world.”

In Lebanon, it is showing in theaters, but some of the Israel scenes have been censored or edited out. It also has been widely distributed in the Gulf, where it has received some thumbs down.

“I don’t think it was trying to justify Israel’s occupation, but it was glorifying the Israelis by emphasizing peace and harmony of the two nations, which is far from the truth,” moviegoer Aleena Khan told the Dubai-based Gulf News. “It was a very rose-tinted version of what the relationship between the Israelis and Palestinians actually is.”

But even the fictional love fest comes at a cost.

(Spoiler alert: Readers who have not seen the movie may want to read no further.)

Since the zombies are drawn to noise, the raucous Israeli-Palestinian celebrations prove to be their demise. Their joint rendition of a popular Hebrew song of peace wakes the undead from their slumber, and they ultimately catapult over the wall and bite everything in sight.

Such scenes have raised philosophical debates in the blogosphere about whether the movie is actually for or against Israel’s real-life separation barrier.

The setting of “World War Z” migrates to Jerusalem after its hero, Gerry Lane, played by Brad Pitt, arrives to figure out how the Israelis have created a safe zone from zombies. There he meets the chief of Israel’s Mossad spy agency, who cites the experiences of the Holocaust, the 1972 massacre of Israeli Olympians in Munich and the surprise war Arabs launched on Israel the following year as lessons that taught the Jewish state to prepare for the unexpected. The spymaster tells Pitt’s character that Israel envisioned the threat because officials are encouraged to play devil’s advocate, with someone offering a dissenting view if everyone else agrees.

Once pandemonium breaks loose, Pitt manages to escape thanks to a cunning, courageous female soldier, played by Israeli actress Daniella Kertesz, who helps him save the world. Aside from her name, Segen, which is actually Hebrew for the rank of lieutenant, the Israeli depictions are fairly accurate. Though shot in Malta, the scenes appear authentic, as do the street signs, the uniforms and the characters’ Hebrew accents.

The rare Hollywood focus on Israel has elicited local pride, with crowds cheering at the sight of the Israeli flag and giggling during Hebrew dialogue.

“It shows that we are strong, we fight to the end and don’t give up, but also are willing to help others,” Ohad Ben-Aharon, a 19-year-old soldier in the Israeli air force, said after a recent screening in Jerusalem. “It’s fictional, but there is also an optimistic message — that there can be peace.”

“We hope the Palestinians indeed agree to live in peace with Israel before the zombies invade.”