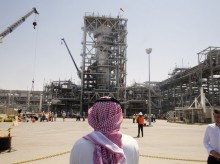 A man stands in front of the Khurais oil field in Khurais, Saudi Arabia, after it was hit during a Sept. 14 attack. (AP Photo/Amr Nabil)

DUBAI, United Arab Emirates (AP) — Political uncertainty and volatile oil prices are hindering economic growth in the Middle East this year, but trends should reverse next year, according to a new report released Monday by the International Monetary Fund.

The IMF’s regional outlook report projects growth to rise just 0.5% in 2019, compared to 1.6% in 2018. Increased activity in the oil and gas sectors is expected to generate a rebound to 2.7% growth in 2020, though this figure too falls shorter than previous projections.

The report, which looks at the economies of 23 countries spanning North Africa, the Levant, the Persian Gulf, but also Djibouti, Somalia, Afghanistan and Pakistan, said the drops were linked in part to the performance of the oil exporting countries, whose economies are expected to retract 1.3% this year. The hardest hit has been Iran and Libya. The IMF expects a 9.5% retraction in Iran’s economic growth in 2019, primarily because of U.S. sanctions against it, and in Libya a 19.1% drop because of that country’s prolonged conflict.

Recent months have also seen a series of mysterious oil tanker attacks the U.S. blames on Iran, something Tehran denies. Iran, which has seen its main export of oil severely restricted, also shot down a U.S. military surveillance drone and seized oil tankers.

“Of course, any increase in tension will have an impact,” Jihad Azour, the IMF’s Mideast and Central Asia department director, told The Associated Press. “I think what is important is that all these developments are showing that there is a need for countries in the region to do the structural reforms that will allow them to have higher levels of growth.”

Last month’s attack on the world’s largest oil processor in Saudi Arabia caused prices to spike by the biggest percentage since the 1991 Gulf War. However, Azour said prices have since settled and the attacks have not had a lasting effect.

“They had an immediate impact but a very short impact because very quickly it was reported that production went back to normal and it didn’t have a supply shock in the market,” said Azour, a former Lebanese finance minister. “The market is witnessing more volatility in the oil prices especially in the short term. Yet, when you look at the medium term the trends are showing a slow and steady decline in prices.”

Overall, the IMF says oil prices have swung from $55 to $75 a barrel since the start of the year. The price for benchmark Brent crude stood at over $62 a barrel.

For oil importing countries like Egypt, Jordan, Lebanon and others in the region, the growth drop was less steep, falling from 4.3% in 2018 to an expected 3.6% this year. Mauritania bucked the trend, rising from 3.6% to 6.6%.

The international lender said the economies of the six Gulf Cooperation Council countries of Saudi Arabia, the United Arab Emirates, Kuwait, Bahrain, Oman and Qatar are expected to grow 0.7%, down notably from 2% in 2018. Azour said it was very important for these countries to keep “diversifying the economy in order to be less dependent on the oil sector.”