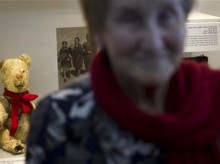 JERUSALEM (AP) — When Stella Knobel’s family fled World War II Poland in 1939, the only thing the 7-year-old girl could take with her was her teddy bear. For the next six years, the stuffed animal never left her side as the family wandered through the Soviet Union, to Iran and finally the Holy Land.

“He was like family. He was all I had. He knew all my secrets,” the 80-year-old said with a smile. “I saved him all these years. But I worried what would happen to him when I died.”

So when she heard about a project launched by Yad Vashem, Israel’s national Holocaust memorial and museum, to collect artifacts from aging survivors, she reluctantly handed over her beloved bear Misiu, Polish for “teddy bear,” so the memories of the era could be preserved.

“We’ve been through a lot together, so it was hard to let him go,” said Knobel, who was widowed 12 years ago and has no children. “But here he has found a haven.”

The German Nazis and their collaborators murdered 6 million Jews during World War II. In addition to rounding up Jews and shipping them to death camps, the Nazis also confiscated their possessions and stole their valuables, leaving little behind. Those who survived often had just a small item or two they managed to keep. Many have clung to the sentimental objects ever since.

On Sunday, Knobel’s tattered teddy bear was on display at Yad Vashem, one of more than 71,000 items collected nationwide over the past two years. With a missing eye, his stuffing bursting out and a red ribbon around his neck, Misiu was seated behind a glass window as part of the memorial’s “Gathering the Fragments” exhibit.

The opening came as other Holocaust-related events took place around the world.

In 2005, the United Nations designated Jan. 27 as International Holocaust Remembrance Day, marking 60 years to the liberation of the Auschwitz death camp.

Israel’s main Holocaust memorial day is in the spring, marking the anniversary of the uprising of the Jewish ghetto in Warsaw, Poland, against the Nazis.

To coincide with the international commemorations, Israel released its annual anti-Semitism report, noting that the past year experienced an increase in the number of attacks against Jewish targets worldwide, mainly by elements identified with Islamic extremists.

At Sunday’s weekly Cabinet meeting, Prime Minister Benjamin Netanyahu said the lessons of the Holocaust have yet to be learned. He accused Iran of pursuing nuclear weapons with the goal of destroying Israel.

Yad Vashem showcased dozens of items, each representing tales of perseverance and survival. They included sweaters, paintings, diaries, letters, dolls, cameras and religious artifacts that were stashed away for decades or discarded before they were collected and restored.

Yad Vashem researchers have been interviewing survivors, logging their stories, tagging materials and scanning documents into the museum’s digitized archive.

Aside from their value as exhibits in the museum, Yad Vashem says the items are also proving helpful for research, filling in holes in history and contributing to the museum’s huge database of names.

“Thousands of Israelis have decided to part from personal items close to their hearts, and through them share the memory of their dear ones who were murdered in the Holocaust,” said Yad Vashem Chairman Avner Shalev. “Through these examples, we have tried to bring to light items whose stories both explain the individual story and provide testimony to join the array of personal accounts that make up the narrative of the Holocaust.”

For 83-year-old Shlomo Resnik, one such item was the steel bowl he and his father used for food at the Dachau concentration camp. His father Meir’s name and number are engraved on the bowl, a reminder of how hard they had to scrap for food. “We fought to stay alive,” he said.

Approaching the glass-encased display, Tsilla Shlubsky began tearing. Below she could see the handwritten diary her father kept while the family took shelter with two dozen others in a small attic in the Polish countryside. With a pencil, Jakov Glazmann meticulously recorded the family’s ordeal in tiny Yiddish letters. His daughter doesn’t know exactly what is written and she doesn’t care to find out.

“I remember him writing. I lived through it,” said Shlubsky, 74. “Abba (Dad) wasn’t a writer, but with his heart’s blood he wrote a diary to record the events to leave something behind so that what had taken place would be known.”

She said it pained her to part with the family treasure.

“I know this is the right place for it and it will be protected forever,” she said. “Now is the time and this is the place.”