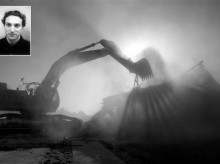 A settler's home is destroyed in the Jewish settlement of Peat Sadeh. (AP Photo/David Guttenfelder)

The jeep roared to life and led the last convoy of Israeli tanks and armored personnel carriers out of Gaza. Within moments, it was done: Thirty-eight years of Israeli rule in the Gaza Strip came to an end.

Hunched in the back seat, I became a footnote of history — the last journalist to leave the Gaza Strip with the withdrawing Israeli troops.

It was the end of a long day. The previous afternoon was spent with soldiers in an abandoned basketball court in Neve Dekalim, the largest Jewish settlement in Gaza. Now it was reduced to piles of rubble, with plumes of smoke billowing from the debris.

Later, a somber ceremony at the Israeli army headquarters in Gaza was attended by hundreds, with the sounds of Palestinian gunfire echoing in the background. In the final hours, I accompanied the deputy commander of the central brigade of the Gaza division.

With a shaved head and round glasses sitting on a round face, Tzoran, 35, looked like the quintessential gruff, no-nonsense Israeli officer. He acted like one, too, constantly barking out orders at his soldiers and firing out staccato responses over the radio.

That night, he was responsible for a large part of the coordination of the withdrawal in the field, from relaying orders down the ranks, to evacuating broken down vehicles, to directing the traffic on the routes. He said it was a night of “strange emotions.” He supports the decision to withdraw from Gaza but is still nostalgic about his time in Gaza.

“We’ve been through a lot of difficult things here,” he said, yelling over the crackle of the radio. “We are leaving a lot of memories behind.”

Our first stop was Kfar Darom, one of the first settlements in the Gaza Strip. We stopped for coffee with the tank commander in the center of the village. A stray cat hopped from one of the boulders, probably the last living thing to greet the Palestinians upon their arrival. Across from us was the synagogue, the last structure standing. Tzoran said he feared for its survival. A few hours later, his fears were realized, as we watched the flames from a distance; a Palestinian crowd had set fire to it, venting their rage against a symbol of the hated occupation.

Then it was on to the nearby Tel Katifa settlement to visit another tank atop an isolated ridge. Through night vision goggles, I saw hundreds of Palestinians celebrating in the town of Deir El-Balah just a few hundred meters away. Some begin wondering toward the Israeli position. The soldiers fired warning shots and launched a flare, forcing the Palestinians to retreat.

It was early Monday, Sept. 12, 2005, and Tzoran said he wanted to take me to a special place — a little ramp overlooking the coast just south of Tel Katifa. Here, the waves splashed peacefully against the shore. “This is my ramp. This is my place,” he said, looking out toward the sea. “Now it’s just us and God here.”

Just past 1 a.m. on Monday, the order to withdraw came over the radio. “This is it,” he said.

One after the other, like clockwork, the battalions rolled out as dozens of vehicles began making their orderly way out of the strip.

“Lebanon was seen as an escape,” Tzoran pointed out, referring to Israel’s hasty retreat from the neighboring country to the north in 2000. “This is different, it’s a departure from a position of strength, organized and planned to the last detail.”

Not everything went according to plan, though. Around 4 a.m. one of the tanks broke down. Another tried to drag it, but fails. A tow-truck was called in, but time was running out, several settlements were already ablaze and the commanders feared the Palestinians were closing in.

Soldiers took up positions around the tank, occasionally firing. By daybreak, the evacuation was completed. The new border, Kissufim Crossing, lay directly ahead, and Tzoran’s jeep, with me in the backseat, drove into Israel.